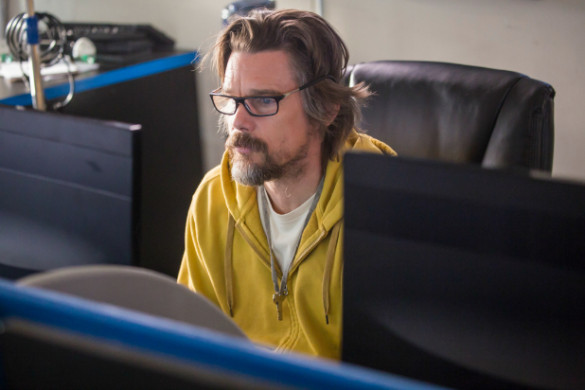 Day Four of my coverage at SXSW didn’t start the way that my other days began because I didn’t see a movie. I was invited to a roundtable discussion run by Leonard and Jessie Matlin to talk about film criticism and bounce off ideas about what makes a critic, how should someone write reviews for film, criticism in general and how to make the internet a more positive place to combat the everyday negativity we read. It was such an enlightening conversation and I got to talk to the Maltin’s after for about twenty minutes and they are truly some of the nicest people you will ever meet. Note to anyone out there going to their first film festival, go to panels or rounds tables because the information you can gather from those events are huge. Also don’t be afraid to talk to people, like the Maltin, because I’ve talked to a lot of people throughout the festival and they have all been so nice and open to speak if they have the time.

So once the roundtable concluded, I made my way back over to The Paramount to check out an “in progress” documentary from Morgan Neville, the Academy Award winning director who last directed the smash hit Won’t You Be My Neighbor. What I mean by “in progress” is that the project is not done by they should be finished with it soon. The project is called Shangri-La and, to my surprise and many in the audience, we weren’t going to be watching a film, we were going to be watching the first episode of a four-part documentary-television show. The show follows the life of one of the most influential music producers Rick Rubin and his one of a kind studio that has housed some of the biggest names in music, as well as some of the best album and songs to come out of all types of genres. The artists that were presents in the document included musicians of The Avett Brothers, Vampire Weekend, Flea from the Red Hot Chili Peppers and Lil Yachty as well as director David Lynch, producer Mark Ronson and magician David Blaine. To that this documentary doesn’t have big stars is an understatement but it’s not about the cameos, this film is about Rick and that studio that everyone comes from all around the world and based on the first episode, I can tell this is going to be Neville’s most experimental documentary yet. From what we get in the episode, he really takes a look into Rick’s life with such a visual style instead of words because Rick’s is such a private guy, thus making for some interesting choices. Overall, while I was disappointed it wasn’t a film, I will be checking out the rest of the series once Showtime releases it later this year, even though I know how they are going to end it.

Once the Q&A was over, I got in my car and drove to the AFS (Austin Film Society) theater to catch a screening of actor turned director Logan Marshall Green’s new film Adopt a Highway staring Ethan Hawke. The film follows a just release convict who has nothing to his name because he has been in prison for twenty years for committing his third strike, possession of a ounce of marijuana. One night, as he is taking the trash out at the fast food place he works at, he discovers a baby wrapped up in a bag, cry and coughing for her life. What then ensues is a story about how we should do the right thing and take care of each other regardless of the circumstance, while also being a film that is about second chances, not just for the baby but for Hawkes character too. This is a very good debut by Logan Marshal Green, who really gets the melancholy tone down that he is looking for, and thus leads to a very moving ending. Along with Green’s direction, the score by folk singer Jason Isbell is easily one of my favorites of the year so far and is used beautifully to tell this story and complements the characters. But the star of the movie is also the reason to go see it because just like last year’s First Reformed, Ethan Hawke gives another commanding performance in such a different film and with such a different character. With this performance, I can say with confidence that he is the best working actor on the planet and we are witnessing someone at the height of their acting talents.

Once I was done with Adopt a Highway, I decided to skip out on the headliner for the evening in Good Boys and went to the convention center to see a film that already premiered two nights before in Lynn Shelton’s Sword of Trust. The film follows a couple who comes home to find out what the grandfather of one has left them in his will. What they discover is that all that was left to them was a sword and nothing else. Without getting into spoilers, I will not tell you how the sword plays into the film and its backstory but what I can tell you is that it’s one of the funniest concepts I’ve seen here at this festival. So when the girls try to pawn off the sword, they, along with the pawn shop owner and his assistant, get wrapped in something that’s far over their heads and completely entertaining to watch. The movies script is downright perfect, with humor oozing all over the place and also real moments of sorrow for these characters, especially Mark Marin’s pawn shop owner Mel, who gives the best performance of his career while also bringing his same style of humor that goes so well with this story. It’s a film that also feels super timely considering how it ties in the major reveal of the film with our society and how we consume facts. The film starts off a little slow but once the reveal is made, the movie shines and becomes an unexpected delight and gives another show case as to why Shelton is one of the best comedic directors working today.

Check back here tomorrow for my day 5 recap and follow me on Twitter @ryanmcquade77 for more coverage of SXSW.