Movie Review: ‘Amsterdam’ is Less a Mystery Than a Mess 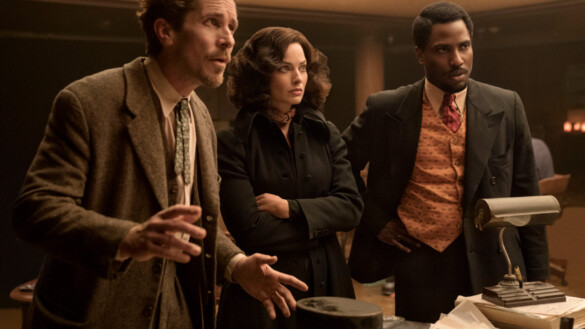 Synopsis: In the 1930s, three friends witness a murder, are framed for it, and uncover one of the most outrageous plots in American history.

There is a point in the first several minutes of Amsterdam where you realize that the characters are never going to stop talking. It goes from fade in to fade out without a breath. Even when all the characters in the scene have their mouths closed, there is narration. Sometimes the narration is lengthy, unnecessary, invasive exposition and other times it’s one or more character’s solipsistic, navel gazing observations. It’s so suffocating not only to us but to the story.

There is so much dialogue that nothing else lands. None of the action actually has impact because as soon as something happens, they are off on another tangent or doing something else adjacent. There is so much conversation that some conversations are complete and utter nonsense and not in a fun way. To give an example, the two police detectives hounding Bert (Christian Bale) and Harold (John David Washingon) have come to Bert’s office. Bert moves from one part of his office where he was rehearsing a song, to the middle part of his office where he talks to the detectives, to a more private portion of his office where he talks with the autopsy nurse, Irma (Zoe Saldaña). While Bert talks to Irma and the two of them are having a quiet moment, the two detectives suddenly start a conversation. The two scenes are intercut, confusing and end with a slap from Bert’s wife Beatrice (Andrea Riseborough), which wasn’t stopped by and didn’t interrupt the two detectives somehow.

That “somehow” sums up a lot of Amsterdam. The plot is so convoluted that even when something breaks through the constant drone of voices, it takes several beats to realize that this was the important thing amongst the cacophony. Somehow, things just come together for these characters. After the third half-formed soliloquy about love and friendship, one wonders if David O. Russell combined several different drafts and went off to shoot without any regards as to how it all really works in concert. He certainly didn’t seem to allow for the artistry of one of his partners.

Cinematographer Emmanuel Lubezki has a style that’s easy to recognize. He favors a long take and an extreme close up with natural lighting. None of this meshed with Russell’s frenetic, constantly moving script. It looks as if Lubezki may have attempted some of his most well known tricks, but the shots have been hacked to pieces by Russell and editor Jay Cassidy. It’s so cut apart that there are focused shots on innocuous items that must have meant something and pans that should have connected a speaker with what they were seeing, but was cut so the camera arrives a moment too late for it to land. It’s as if Russell didn’t trust Lubezki’s techniques to let his script live in the moment. Even the moments that are meant to be frivolous and joyous dreamscapes are cut into pale imitations of Lubezki’s previous works with directors like Terrence Malick and Alejandro G. Iñárritu.

About the only thing in the film that does work is the makeup. The scars, the glass eyes, and the prosthetics people wear are incredibly done and give each character a unique and grizzled look. The most made up of course is the chameleonic Christian Bale. Bale does the most with what little he is given with his character. He transforms himself so wholly that you wish that the performance belonged to a much better feature that allowed it much more depth.

It’s possible that David O. Russell has always been this sophomoric filmmaker and we indulged in his run of films in the 2010s because we were blinded by the acting of his leads. It may be time to reassess those films to see if the cracks were there all along. Amsterdam certainly won’t be a comeback. It won’t be a film people mention when they mention Russell’s body of work and the title certainly won’t be mentioned as much as the characters in this film say it over and over and over again. Amsterdam is noise and nothing more.