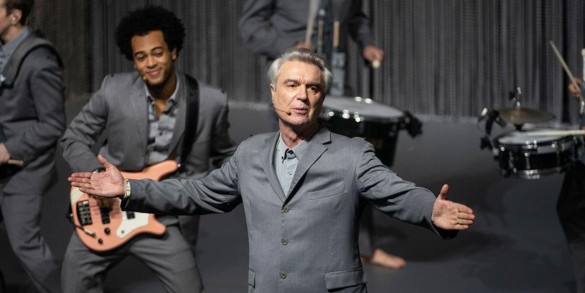 As someone from Scotland, I should be ashamed that I am unfamiliar with the works of David Byrne, a fellow Scot. Whilst I have obviously heard of him, as well as Talking Heads, I could not name a single song or album. I did not know a single thing about the American Utopia production either, and only became aware of it when I heard that Spike Lee was set to direct the filmed production of it. This film is going to be an obvious watch for fans of David Byrne, but I am here today to tell you why everyone should give this production a watch.

I do not want to make this review focused on the music itself, but it is something to highlight in a concert film. As someone who hadn’t heard a single song before this screening, I found myself really enjoying the music. It isn’t the sort of genre I would naturally listen to, but it had a nice sound to it. It wasn’t too generic of pop, yet it still felt quite modern and spoke about today’s society (a theme I will continue to address throughout the review). David Byrne is also a natural performer, being able to sing well whilst putting on a stage production like no other concert experience I have seen.

Of course, a stage experience is more than just what you hear, it is what you see on the stage. Most concerts have a simple set up with a band in the background and the artist out in front. Not with this production. From the opening sequence, there is a table set up and David Byrne is holding a brain and using it as part of the performance. It’s still simple in the presentation in comparison to most stage productions, but the set-up that is used is done to great effect.

I want to use a stage production brought to screen this year that many people have seen, Hamilton: The Musical, to illustrate how simple can be extremely effective and how it is also done here. Both of these productions use little props and have a large floor space to play around with. Instead of filling it with elaborate set pieces that move constantly, the space is there to allow fluidity between the people on stage. Complicated dance sequences not only make for incredible sequences but are able to communicate the story between narrative and music. That is exactly what David Byrne’s American Utopia does, and it is incredibly effective.

David Byrne is great as a performer, but so is the entire crew he has on stage with him. They fill the room with energy, and it makes you think that so many people are creating this energy when there are only eleven people in the entire production.  All of them are great, but special recognition goes to the two backing vocalists, Chris Giarmo and Tendayi Kuumba. Not only do they have to give great vocal performances as well to support Byrne, but they have some extreme choreography to pull off throughout it as well. They are captivating to watch and you cannot take your eyes off either of them.

I could speak about the production itself all day, but this is more than just a stage production. This is a recording of a stage production and done by none other than Spike Lee himself. You can definitely see his style of filmmaking throughout, particularly when David Byrne does a cover of Janelle Monáe’s “Hell You Talmbout” – which is easily the most powerful section of the film. Spike Lee managed to find his voice in this production and, between him and David, make big statements that still impact Americans to this moment in time.

It is not just these individual moments that make the filmed version of the production work, but even the smaller angles and tricks that Spike Lee does. The opening shot is taken from a bird-eye view and it is incredibly effective to see how much space there is on the stage. A small touch that I really liked was how the camera was angled enough to see the crowd. This is very much a stage production that you couldn’t film in an empty room. Between the crowd’s reaction to the performances on stage and the way that Byrne breaks up the songs through interacting with the crowd, it was electric to see a live audience react to something on stage in this format.

Right as I finished watching David Byrne’s American Utopia, I tweeted that it might have been the concert lover in me that made me warm to this project. I know the feeling of going to a stage production and being taken away to another world. It is exactly what we need right now, but sadly in a climate that cannot support the medium due to the ongoing pandemic. This film felt like a hug to me, saying that there is still a way to entertain on the stage and, one day, we will get to do the same again.