Movie Review (TIFF 2022): ‘Aftersun’ is a Recollection of a Fragmented Past 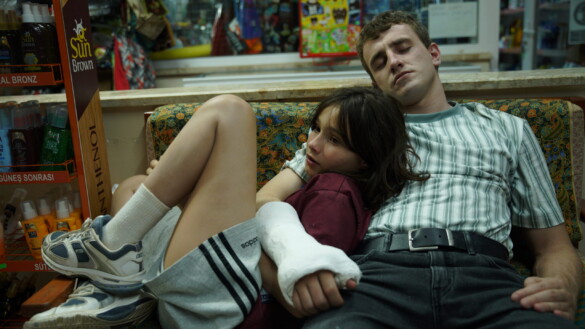 Synopsis: Sophie reflects on the shared joy and private melancholy of a holiday she took with her father twenty years earlier. Memories real and imagined fill the gaps between as she tries to reconcile the father she knew with the man she didn’t.

Charlotte Wells’ debut feature, Aftersun, is the festival season’s talk of the town, and it deserves to be. With enigmatic performances from its leading duo of Mescal and Corio, as well as a personal and sincere script, the film strives as it reflects on past experiences while filling their gaps in the future – a reflection of childhood and a celebration of fatherhood.

Plenty of writers begin the process of their following script with a story in their head, no matter the genre. However, ultimately, they tend to lean toward a more personal side to the script – managing to write about themselves as they continue. And although sometimes that can backfire, turning into a pretentious slope, great and touching stories can arise from those personal anecdotes. This is what happened during Charlotte Wells’ process of scripting her debut feature, Aftersun; over the course of writing, she wrote herself more and more into the characters.. You get the sensation of attachment as each line is delivered, which is one of the multiple aspects that makes this film a heartbreaking and vibrant experience. Aftersun deserves numerous rounds of applause, not only because of the mature portrayal of its contents (family dynamics; specifically, it is young and fragmented), but also the way it is crafted, humanistically and with elegance.

With a simple yet multilayered story set in the 90s, Wells takes us on a journey of reflection and exploring the possibilities of reconciliation between trauma and bliss. As an adult, Sophie (played by newcomer and standout Francesca Corio when young) reminisces on a summer holiday at a Turkish seaside resort that her father, Calum (Paul Mescal, tied with Normal People for the best performance in his young career),  took her twenty years earlier. There’s sadness and happiness intertwined with one another at all turns; holidays are moments where either one feels their most alone or accompanied – a time of both introductions and farewells. A saddened sensation is felt during Aftersun’s entirety, but it is hard to pinpoint where it comes from since it arrives on various ends. However, there are moments of pure love, as seen in a scene where Sophie questions why Calum says “I love you” to his ex, her mom. He replies by saying even if they aren’t together, she is family, breaking millions of hearts with a response so humanistic and hard to accept for many.

In addition, the screenplay is filled with funny and endearing moments, which helps the film not to tend to melodramatic tendencies or highly sentimental indulgences; it is purely humanistic, honest, and pensive – straight from an old VHS with recordings of the past. It feels like a foggy haze covers the film, where two distant yet different emotions (joy and sorrow) fight with each other because of the nostalgia and longing juxtaposed with youth and innocence from both versions of Sophie (as an adult and child). Aftersun begins with Sophie filming Calum on a handheld video recorder. This frequent motif happens throughout the film, asking him about what he would like to be when he grows up. The response and reaction showcase that something is wrong, and the premonition for something worse is amidst. And when Calum misses the mark on his parental duties, his apologies feel as if he’s apologizing for something more than just screwing up with simple tasks – adding to that element of not being able to pinpoint the longing sadness that breaks our hearts slowly.

Aftersun is, on paper, a coming-of-age story that reflects on Wells’ childhood and the events that transpired during it; however, there’s more than that. It is about those memories replayed in your mind from time to time, which bring a sense of nostalgia and sentimentality. It also makes you ponder about your preadolescence and the decisions you or your parents made through it. The duality of Sophie, in two different stages of her life, is presented through quick reflections on the past. She remembers that her father was going through a melancholic phase at that time caused by a divorce, a recent injury, and flashes of his drug-pierced youth. But, of course, she was a youngling and didn’t understand the reasonings for her father’s occasional gloomy behavior or the masking of such. So, as it runs its course, Sophie fills in the missing pieces to complete the whole picture of the trip that remains stuck in her head. It may sound like the afterburn of a troubling decision, but it culminates as a story that celebrates fatherhood amidst the issues that arise through it.

All of these thematic elements are elevated for plenty of reasons, which vary from the sincere script by Wells and Blair McClendon’s acute precision in the editing to the excellent performances by its leading duo of Mescal and Corio, whose impressive (and stands out completely) given that she wasn’t an actress before this. Paul Mescal keeps impressing us as he crafts an excellent repertoire for his young career; only years in between each of the projects, Mescal convinced us that he was a teenager, and now with Aftersun, he is a young father. Mescal presents the convictions of Calum’s past and the reflections of the future with ease through “embarrassing dad” moments and lingering scenes that portray his saddened yearning. The cinematography helps to elevate the body language of Mescal’s performance, even if his facial expressions are also crucial. One aspect that might pass through people’s minds is Wells’ framing and use of the 90s setting.

The two fit into the texture of the picture, where it is limited to a point, but captures the decade precisely amidst those limitations by showing pay-phones, including MiniDV footage, and its excellent jukebox soundtrack (which includes REM’s ‘Losing My Religion’, Catatonia’s ‘Road Rage’, and even some tracks by Blur and Alanis Morissette – as well as the Macarena, which was brought back to life by Julia Ducounau in Titane). Charlotte Wells’ directorial debut may not be autobiographical, but there are intricate emotions that feel near and dear to her heart, resounding and pulsating from beyond the frame. Aftersun contains unease, but not in a horror picture way; it uses this to get a grip on themes of pondering about memories – rethinking them and seeing new layers years later. It is about the creation of memories that our parents help forge, hence us getting a nostalgic sensation when thinking about it or being in the presence of something similar. In addition, there’s a dark side to all of this; you begin to remember the darkest of memories – the ones you try to avoid.

There is no such thing as a perfect childhood,, so the memories we keep when young are the highlights; yet, as time passes, you re-evaluate them and learn more about the sacrifices your parents made for you to be where you are. The light and dark of remembrance are intertwined in Aftersun, which helps it excel. As you grow older, your view of what happened in the past changes. You start to notice the details, the things you were too young to understand. As it unfolds, the more it hurts. Yet, at the same time, it helps us heal by reevaluating our own past experiences as the adult version of Sophie did. I cannot wait for what Charlotte Wells has to offer on her next piece of work; the hype around this feature was legitimate, and more so.