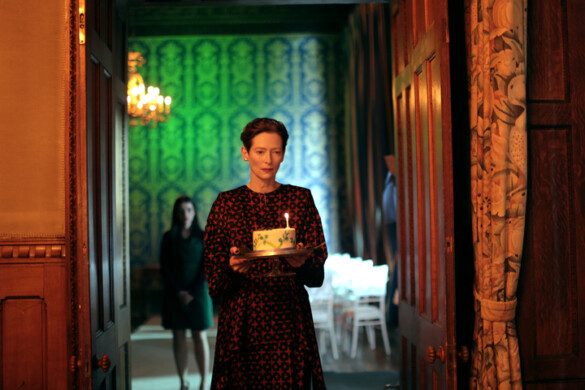 Synopsis: In this ghost story from acclaimed filmmaker Joanna Hogg, a middle-aged daughter and her elderly mother must confront long-buried secrets when they return to their former family home, a once-grand manor that has become a nearly vacant hotel brimming with mystery.

I consider Joanna Hogg to be one of the best current British acts to pierce the screen, as her craft gets better and better with each movie. What makes her pictures so tantalizing and magnificent is the tactility and gracefulness of her pen intertwined with the distinctive and acute style of her directorial hand; both of which leave several wistful markings on the viewer. Although the features that came before it are great pieces of work (Unrelated, Archipelago, Exhibition), her name was brought into the spotlight via her duology of personal films that retell her past experiences while adding bits and pieces of fiction, The Souvenir Pt. I and Pt. II, the latter being her best work to date. However, for her latest feature, Hogg remains with the grounded fashion of presenting her meta-textual semi-introspective narratives. Yet, this time around, it has a more haunting tone, though still equally personal and touching.

Joanna Hogg’s latest is a ghost story titled The Eternal Daughter – which could also be named “The Souvenir Pt. III” in essence, which was quite a surprise to me since I didn’t expect her to continue that tale. However, this isn’t a direct sequel; it is more of an extended side story of what the film’s lead character would be like decades later, which, coincidentally, is a version of the director. It contains the aspect that’s repeated across her latter work of being haunted by her recollections. Yet, that doesn’t mean she isn’t reinventing herself. This time around, it brings a further melancholic hew to the mix instead of the dreamy haze of her previous film. Much like David Lowery’s A Ghost Story, the purpose of Hogg’s latest isn’t to scare you (this isn’t a horror picture). It is all about reflection rather than atrocities (contemplation over torment). The Eternal Daughter is all about the mystery of our parents’ lives – the secrecy kept hidden during the times that we are with them and the ones without them – and the reflection of how time passes slowly during pained moments and quickly during instants of happiness.

Childhood nostalgia is a factor that’s at play here, but, at the same time, it makes us think about the lives our mother or father had before we were born. Although Honor Swinton-Byrne isn’t in this feature, that doesn’t mean that the character of Julie Hart (Hogg’s surrogate in The Souvenir films) can’t be in the movie. Her own mother, Tilda Swinton, not only plays the part of Julie but also reprises her own role as Rosalind (Julie’s mother). In a dual role, Swinton breathes new life into both characters and adds self-referential layers to Hogg’s semi-autobiographical stories. The Eternal Daughter follows her journey decades later and in a different phase of her life. She’s a childless filmmaker that’s still dealing with feelings of remorse. Julie has brought her elderly mother, Rosalind, to a country house hotel in North Wales, which her Aunt Jocelyn once owned, for her birthday. Ross reminisces about her time at the country house as a child.

There weren’t many happy memories; they mostly revolved around her family’s evacuation from London during the Second World War and the dread that transpired as she looked at the catastrophes from afar. Rosalind keeps the pain all bottled up inside, and Julie is immensely angered that, even to this day, she isn’t telling her how she feels. Meanwhile, Ross is saddened that she won’t have a granddaughter and that Julie will remain eternally her daughter and nothing else – hence the title. As Rosalind remembers the day they told her that her older brother Peter was killed, Julie contemplates whether she’s trespassing on her mother’s life retellings as she writes them down in hopes of making a film about it. The ghost story elements arrive through two different means. One of them is the duality of the character that Swinton plays, which adds reflective details to the film’s backbone. The other arrives from its setting: the hotel.

Problems arise as soon as they arrive; issues with their booking (even though they are the only guests staying there), banging noises caused by the other rooms are keeping Julie awake at night, and the attendant’s attitudes vary – the receptionist (Carly-Sophia Davies) is rude, while the concierge is quite welcoming and hears Julie’s pains. It almost does turn into a horror picture with these elements. Still, its slowly flowing self-reflection ravishes the viewer with themes like the connection between mothers and daughters, as well as the separation that comes while aging. This could be described as Joanna Hogg’s rendition of The Shining, with its semi-haunted rooms, empty hallways, and somber atmosphere. With The Eternal Daughter, Hogg experiments with her ambition to explore how memories affect a person, both in assuring and destructive ways, especially if it ties to a close one – a family member or a mother. Heartbreaking and transient with its themes of secretiveness in relative bonds and the emotional wrath of remembrances when confronted in nostalgic settings, this film delivers playfulness in its keen attention to detail, from the posture and movements to how they express themselves in its key moments.

By looking into Julie Hart’s soul, Hogg is actually writing about her own pains and potential frustrations. The Eternal Daughter is about Hogg reflecting on her present and what may arise in the future, either with her family or career. Hogg writes her characters in a humanistically elegant way and poised while leaving the right amount of ambiguity so that the audience can relate to them. It’s a thing of beauty how Hogg concocts her scenes of emotive dialogue due to her intricate footing in delivering dramatic efforts. Seeing her changing her style by applying horror-esque elements as if the characters are always in the presence of a ghost from the past via dim lights, creaking sounds, and Ed Rutherford’s hazy cinematography just makes me love her more because Hogg’s interpretation of this story about haunting memories is utterly remarkable. She has plenty of tricks up her sleeve that give The Eternal Daughter a mysterious, eerie atmosphere that’s equal parts haunting, hallucinogenic, and heart-rending.

Although all of the cinematic aspects are thriving, the film wouldn’t work without the majestic talents of Tilda Swinton aka Hogg’s long-time muse, whose dual-performance is hefty enough that you feel as if you aren’t watching a film in which she plays two characters. The nuance in her two performances makes the characters feel separate. This cinematic element would have been a gimmick in the hands of another director and actress, but you can trust Hogg and Swinton to sell this transient experience. The Eternal Daughter is a lovely and cathartic ghost story in grounded measures, which helps it not sway into illogical directions. What could have been an artistic experiment turns out to be yet another ravishing addition to the English director’s astonishing filmography.