Movie Review (LFF): ‘After Love’ Struggles to Live Up to Its Opening Sequence 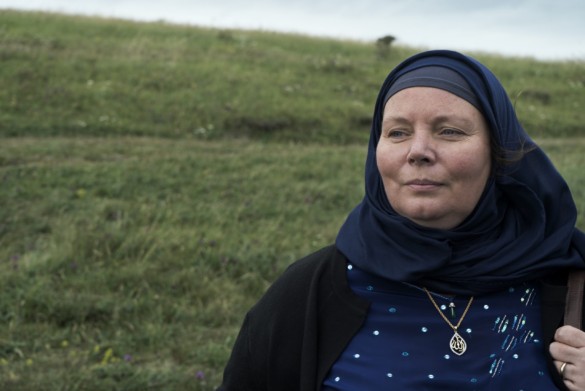 Synopsis: Set in the port town of Dover, Mary Hussain (Scanlan) suddenly finds herself a widow following the unexpected death of her husband. A day after the burial, she discovers he has a secret just twenty-one miles across the English Channel in Calais.

The opening sequence of this film appears to set-up a normal household in their daily lives. The kettle is brewing, the couple are chatting and life moves as normal. However, it does not take long into this opening scene to realize that something major has happened, and life changes within that moment for Mary Hussain. Not only is this scene so incredibly impactful, but beautifully done and respectfully handled. After the audience realizes what has happened, the screen cuts to black and the scene is over.

Joanna Scanlan gives a wonderful performance here, not just in the opening scene but throughout the entire film. The performance is not one that is over-dramatized or romanticized, instead of feeling human and real. I have not seen her in anything before this film, but she is someone that I want to keep my eyes on in the future. She has to hold this entire film, and she manages to do that.

I appreciate the approach to filmmaking that Aleem Khan took with this story and his approach to filmmaking. This is an authentic look not only into the life of a widow but the life of a Muslim. The filmmaking captures the prayers, the prayers, and the lifestyle that Muslims live, and yet it does not become a personality trait for Mary or her family. She is still motivated in this film by her family and by the narrative, things that aren’t based on religion. This is not a religious film in nature, but I appreciate the use of religion throughout the film.

Whilst I appreciate what Khan did with certain aspects of this story, unfortunately, the narrative, in general, lacked after that powerful opening sequence. This story focuses on exploring the life that Mary’s husband had whilst he was alive, but I struggled to remain fascinated during this section. The strongest parts of this film are when the story is based on Mary and her dealing with the grief of losing a loved one, and the film loses some of that honestly and raw filmmaking when it goes beyond that story.

What might have helped this story be stronger would have been a further exploration of the other characters around Mary, particularly the family that she goes to work for to gain access to their place. The performances were solid from both the mother and the son, but they lacked development in a story that was asking them to have a personal connection to Mary and her husband, Ahmed. The family felt like they were there just to have a narrative to the film, and it left me feeling cold when Mary was interacting with them.

The film uses the location of the cliffs of Dover as a symbol, which is effective in some ways. Watching the cliffs break off a little and having Mary stare out at it, representing how she feels at that moment in time, is a great use of imagery. However, it does take away from the editing style of the rest of the film, which feels raw and focusing on capturing the real emotions behind people. Using a symbol to represent this does look nice visually but takes away from the impact that Joanna Scanlan gives from her performance alone.

The film is a tight 89 minutes long, which seems reasonable for that this story focuses on. However, I wonder if the time length is part of the reason this film doesn’t quite work. If this film took some more time, the relationships could have been further developed and we could have learned more about the side characters. If the film was shorter, this story couldn’t have felt unnaturally dragged out and the pacing would have been tighter. I just wish this film had something more to offer.

This film had real potential and a distinctive voice that certainly deserves to be heard by a large audience. There are individual aspects that I really love about this film, but I just wish the story connected with me more. I am in love with the opening scene, and it shows to me the talent that Aleem Khan has with filmmaking. I will be interested in whatever Khan makes next, but sadly this one didn’t fully work for me.