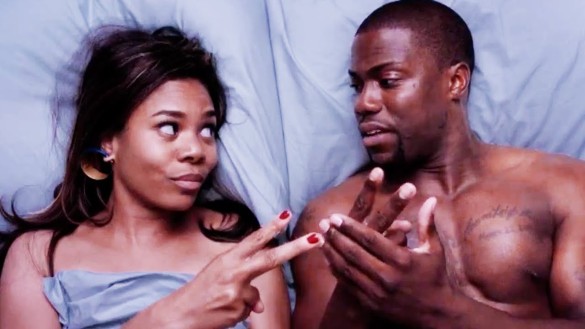 Synopsis: A modern reimagining of the classic romantic comedy, this contemporary version closely follows new love for two couples as they journey from the bar to the bedroom and are eventually put to the test in the real world.

INTRO
I said it once and I will say it again, Hollywood loves remaking movies and I never see any point in remaking a classic great film. “About Last Night” is an upcoming remake of the same movie which released in 1986. The 1986 version starred, Rob Lowe and Demi Moore. The 2014 version stars Kevin Hart, Michael Ealy, Regina Hall, and Joy Bryant

DIRECTION
My worst fear about this remake was that it was going to exactly like the previous one without any major changes. As soon as the casted was announced it was interesting that it went with an all-black cast and that the film would be based in Los Angeles instead of Chicago. Director Steve Pink and screenwriter Leslye Headland do a tremendous job in keeping key components of the original play and film but providing a fresh mix on things that are more relevant to our society now. The characters are all relatable and it makes us appreciate the film even more. One big difference between the original and this film is that the women they encounter. In the original the women were more full figured and have more diversity while the current version has your typical stereotypical women that we as a society praise shamefully I may add. Steve Pink was also able to keep things going between the two couples without missing a break.

SCRIPT
I thought this film was written well and the choice of actors made this film blend perfectly to a certain degree. The movie is written much like a new relationship would go. First couple meets, 2) have chemistry, 3) Move in together (to test their love), 4) one or both parties become bored and they break up, 5) one or both members realize their life is not the same without the other and finally they rekindle. What happens between steps 1-6 is what makes the movie and in this case it was filled with what I call “Kevin Hart Syndrome”. The script was written with a nice balance of humor and seriousness. In comparing the dialogue to the original this version was more scripted towards the original screenplay which I like because the more sex and dirty talk there is the more I like the film. Changing the location and the characters made the script more exciting as it brought new light as I stated before.

PERFORMANCES
First off, I am not a Kevin Hart fan, so seeing him in a leading role makes me cringe. For the most part the dialogue is fine between the characters but then the “Kevin Hart Syndrome” kicks in where we have too many times where Kevin Hart is being Kevin Hart. Hart was not completely bad in this movie but the way he delivers his lines took away the film for me. Regina Hall’s character Joan is just as witty as Hart’s character (Bernie) but her delivery was more natural and kept me in the film and Hall easily stole the show in this movie. Michael Ealy (Danny) and Joy Bryant (Debbie) had wonderful chemistry together and played their roles very well, but I think Joy Bryant should have been replaced by Sanaa Lathan or Nia Long as they perform very well in these types of roles (Best Man Holiday). I just wished that Paula Patton had a larger role (sigh).

SCORE
About Last Night featured songs from artist such as John Legend and Bruno Mars. The best song of this movie is Get Up (I Feel Like Being a Sex Machine) by James Brown. Movies in this time of genre usually have great scores that fit the more perfectly. About Last Night continues the tradition of successful scores in a comedy movie.

IS IT WORTH IT?
Being a film lover, this movie cannot hold a candle to the original because it was perfect on all cylinders. The newer version is intended for a different demographic and based on other people that viewed the film, they absolutely loved it. For me I would have liked Kevin Hart more in a supporting role but if you enjoy his acting then you will enjoy this film. If this film was an original I may have liked it but if I had to choose between the original and this version I would have to choose the 1986 version.