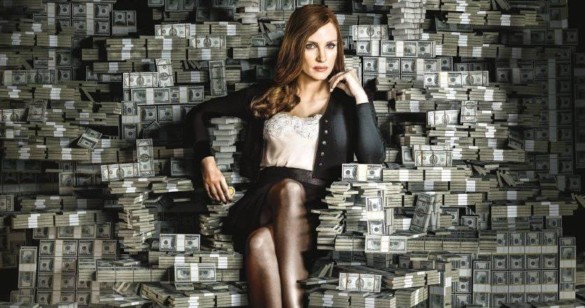 Synopsis: The true story of Molly Bloom, an Olympic-class skier who ran the world’s most exclusive high-stakes poker game and became an FBI target.

Aaron Sorkin, who’s arguably become the most prominent film and television writer of this generation, up to this point in his diverse filmography has only just now gone on to achieve directorial status. Spanning through a career that penned such projects as A Few Good Men, The Social Network and most notably his work on The West Wing, the validation of him as this sharp conductor of initiating drama ultimately led him in the direction of Molly’s Game. And as much as one would adore to be revered and smitten by Sorkin’s keen wit from this adaptation of Molly Bloom’s 2014 book of the same name, this freshman outing for him is indisputably a meritable start for the unlocked potential shall he ever desire to helm the mantle of a project again.

The shrewd and quite mischievous subject matter that plays as the building blocks for the film fuses in to Sorkin’s unblemished and now independent methodology as an executive leader without such faults. Everyone is aware that he’s a maestro of dramatic penmanship but that transition to film could’ve been something he might’ve bit off more than he could chew. However, even with his brilliance, that arid level of skepticism and triumphant uncertainty leaves open a vacant space of whether or not he could conquer a project for the first time solo. But spoiler alert, for the generality of the project, he does. This goes without saying that similar to the aforementioned and while being engaging for the majority of the staggering 2 hour and 20 minute runtime, perhaps it’s the hyperbolic themes of sadism that tear down the film’s path. The dexterity of Sorkin’s script doesn’t go unnoticed here, but when he continuously attempts to phone in slovenly prepared story points and messages, his foundation begins to crumble.

If there’s one thing that’s unanimous amidst audiences and critics around regarding Molly’s Game, it’s without question the radiance and looming intensity of the on-screen performances from Jessica Chastain and Idris Elba. Chastain flourishes from Bloom’s arrogance and self-influenced hubris of her character. In comparison to her work in other films, she’s just as superb, detailing the enervation and fall from grace as this ‘poker princess’ while also portraying the immediate grit of the character. Idris Elba is finally provided a much more nuanced role. Whereas contrast to Chastain, he embraces the more diffident instances and side of his character within the realistic accounts of what actually happened during Bloom’s trial and defense as her attorney. He has a sublimely long and drawn-out monologue-ish rant towards the finale of the third act, and it has Aaron Sorkin written all over it.

Something that was barely grazed upon is Sorkin’s excellence of a script. It’s already received massive acclaim and it’s currently nominated for a Golden Globe. Alas, for the first hour and 35 minutes or so, it’s a non-stop dramatic thriller. Barely allowing the audience to breathe, it’s pulses through the poker compilations and explanations and continually stays that way. Not even slowing down for one-on-one character interactions. However, once we’re narrowed down to the last 45 minutes, the pacing is brutal. It’s shifts its focus from the elegant bars and hotels to the courtroom. Not that there’s an issue with that story arc, but it’s way too overdrawn for its own sake. I even began to check my watch about every 10 minutes or so. It begins to lose its steam and starts meandering from the central dispute at hand to the subplot of Bloom and her father—played by Kevin Costner, as a way to signify Bloom’s own self-vulnerability that she so desperately loathes.

This manner of non-linear narrative of reflective storytelling is somewhat reminiscent to a solution of The Big Shor and The Wolf of Wall Street excluding the enormous number fourth wall-breaks. I found it intriguing with the voiceover technique and the significance of the story being told from Sorkin, but as mentioned earlier above, it struggles in its assortment of themes. It obnoxiously tries to get across a load of messages regarding self-confidence and empowerment through a real and distinctive story that it is so that it taints the film, at which point it minorly collapses upon itself. Eventually it finds its footing, but I just think had some aspects or elements been taken out or evenly distributed, the outcome would’ve been much more substantial and beneficial.

At the end of the day, I feel as though I was a bit conflicted and maybe even quite harsh on Molly’s Game. There’s no shying away from Sorkin’s cunning intuition from page to screen but there’s definitely components that could’ve been fixed for more feasible enjoyment had everything fallen in place. It’s nowhere near mediocrity and it’s overtaken with two unforgettable performances with one of the best screenplays and directors of last year under its belt. So, maybe it wasn’t exactly the light disappointment I had thought it was.

Hear our podcast review on Episode 254.