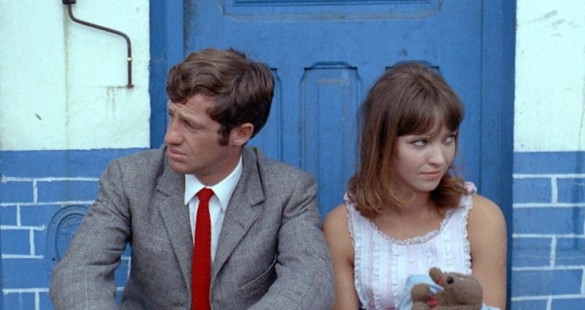 When it comes to movies streaming on The Criterion Channel, there are some that I’m vaguely interested in. But then there are others that are so known, so a part of the collection, that I almost feel like I must cover it in this column. This month provides both that opportunity and that challenge. One such movie is Pierrot Le Fou. Not only directed by Jean-Luc Godard, but also often casually listed as one of the greatest films, and best directed films, ever. So, to state that I feel some slight pressure in talking about this is a grand understatement.

Although this movie defies the idea of a plot synopsis, here’s the gist. Ferdinand (Jean-Paul Belmondo), a quite unhappily married man, runs into his old flame, Marianne Renoir (Anna Karina), who happens to be babysitting his child. As he makes the decision to leave his family, he and Marianne discover a corpse in her apartment and soon they are on the run from the OAS, a far right French paramilitary organization. But even as I write this, very little of that matters. Pierrot Le Fou is many things, most especially an investigation in love, art, and pain.

Despite that very heavy description, most of Pierrot Le Fou is surprisingly light, until it very much is not. The difference between Ferdinand (also called Pierrot, but only by Marianne) when he is stuck at a party with his wife and when he is with his love is not only noticeable but palpable. Godard, clearly a genius (we’re not breaking new ground here), manages to show us what it is like to be in love, to be purely infatuated, as we are launched into this feeling with Ferdinand. Godard manages more feeling with two people sitting stationary in a motor vehicle than most directors could manage with an obvious love scene. The manner in which the film is framed makes us feel as if there are only two people in the world. And if that isn’t the beginnings of love, I don’t know what is. Yes, they are being chased by nefarious characters, but that is easily forgotten as they traipse through the woods together. Much of this is purely due to Godard’s decisions. Even when these two are accompanied by others, the intense focus he employs forces us to only focus on Ferdinand and Marianne.

Even more so than most films, the casting of the two leads is of dire importance in Pierrot Le Fou. In researching the film, there were many different options and thought processes for these two characters. Originally, American Richard Burton was the first choice for Ferdinand, but I wouldn’t have it any other way. Belmondo’s face, full of character, allows us to imagine what he has gone through to get to the point where he is willing to leave his family. Was he truly unhappy? Or merely felt trapped? Godard is trusting us to fill this in however we see fit. On the other hand, Anna Karina embodies the chaos of love so perfectly that it hurts.

I don’t mean this in a performative way. Karina plays two styles equally well. She is obviously beautiful and alluring, which makes his willingness to be with her an obvious choice. The moment in which she sings Ma Ligne de Chance toes the line between childishness and coquettishness so purely that we both understand his annoyance and his eventual decision to give in to her, which he, of course, will repeat for practically the entire runtime. But it should be noted that Pierrot Le Fou is not just about the joy of love, but the ability of those we love to destroy us. Marianne’s distance, which is also alluring in its own right, points to the sour end that every viewer can likely feel coming.

Speaking of that ending, it is imperative to talk about in any discussion of Pierrot Le Fou. There is no pain as sharp, as disorienting, as purely wounding as the end of love. When Ferdinand finally understands that he has been used, now discarded by Marianne, it is impossible not to be moved by his stumbling understanding of what this means and what he has done in reaction. Finding that he has been tossed aside, he is driven to violence, one of the only examples of visceral, active violence in the entire film. But his reaction to committing this act is not to revel in the bloody mess, but to punish himself.

In both a tragic and comic moment, Ferdinand paints his face and then wraps his head in dynamite. In his sorrow, he lights the fuse. But the choice that Godard makes here is stunning in its turn from these mixed emotions to pure tragedy. Just before his end, you can hear Ferdinand change his mind, but it does not save him. Who among us has not thought of (or actually done) something damaging and foolish to ourselves? In this moment, Ferdinand plays the fool for Marianne one last time and it costs him literally everything.

Pierrot Le Fou is quite obviously a film that will reward subsequent viewings. However, it is also one of those movies that, on first experience, has a wildly powerful impact. There are certain images, some static and some full of balletic movement, that are among the most memorable I have seen on a screen. There is always a worry that a film as known as this one will disappoint. But in this case, that concern is assuaged within the first few minutes. Some films stick with you, whether you like it or not. Pierrot Le Fou has a reputation for being one of the greats, and it happily meets and exceeds those high expectations.