Interview: Actor Vincent D’Onofrio for ‘The Eyes of Tammy Faye’ 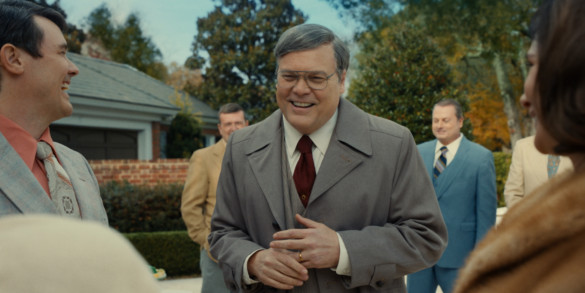 Out in theaters now, The Eyes of Tammy Faye tells the story of Tammy Faye Messner, a televangelist who, along with her husband Jim Bakker, stirred up quite a bit of controversy in the 1980s with their show The PTL Club and the shady activities that were happening behind the scenes, both in the production of the show and in their personal lives. Captured in the year 2000 in the documentary of the same name, directed by Fenton Bailey and Randy Barbato, and narrated by RuPaul, the film now gets the big-screen biopic treatment courtesy of director Michael Showalter.

Jessica Chastain stars as Tammy Faye, with Andrew Garfield as Jim. In their wheelings and dealings in the televangelist community, the two come into contact with Reverend Jerry Falwell, played by Vincent D’Onofrio. A notoriously strict conservative who relentlessly pushed his bigoted belief system, Falwell was memorably captured on film before in Miloš Forman’s 1996 feature The People vs. Larry Flynt, which in part depicted Flynt’s battle with Falwell after Hustler magazine posted a fake interview with Falwell describing his first sexual experience being with his mother in an outhouse.

While The Eyes of Tammy Faye’s portrayal of the man may not be as salacious a period of time in Falwell’s life, it certainly doesn’t paint the rosiest picture of him either. D’Onofrio is tasked with capturing the man as an antagonistic figure to the Bakkers, and to Tammy in particular, as he gives in to the greed of the booming televangelist scene while clashing with Tammy’s activism towards the queer community. This far right political figure is quite the opposite end of the spectrum for the liberal D’Onofrio, something which we discussed in my recent interview with the actor.

MITCHELL BEAUPRE: How familiar were you with this story before signing onto the project? Were you aware of it when it was happening?

VINCENT D’ONOFRIO: I was slightly aware of it. I grew up in the South a bit, and as you know the country was not as blatantly divided as it is now. Although I grew up in a very liberal household, I didn’t actually know I was growing up in a liberal household. I also didn’t know that my neighbors were conservative or far right. They were just like our family. Those kids that lived in that house were close friends of mine, and I remember being over at their house and seeing those shows — The PTL Club and Pat Robertson. All of those types of evangelists. But, that was the extent of it. I think I had the typical opinion that most people who aren’t Christians had about it.

MB: Once you got involved with the film, did you go through a process of learning more about it all?

VD: I knew I had to take a deep dive to learn, and to erase all of my uninformed opinions. There’s how I feel about everything personally, which has nothing to do with my participation in the film. I was asked to play the role of Reverend Jerry Falwell. In order to do that, I had to take that dive, and learn what I could about him. Everything I could find on the internet, every piece of video or audio. I saw the documentary as well, but I also found all of this stuff on YouTube, and watched videos of the shows that Tammy Faye and Jim Bakker did. My task was to service the story in the best way I could, and so I had to create my version of Jerry so that I serviced the story properly.

Within that, it was incredibly fun, and interesting to watch. As an actor, to be in the company of your peers and to have your peers be as good as Jessica and Andrew, it’s a wonderful thing because we’re on set and we’re creating, and you can feel it. To me, Tammy Faye is Jessica in those scenes. It’s an odd way to talk about it. I’m being as honest as I can. I didn’t know Tammy Faye. I know Jessica Chastain, as an actress who’s incredibly talented, playing Tammy Faye. That is extraordinary.

MB: How did inhabiting this character and acting out this story have an impact on your perception of these people and that kind of political sphere?

VD: The one point that it makes for me is that there’s good in bad, and there’s bad in good. I think that’s needed more than ever right now, because we get blind sometimes and forget that things are not so black and white, unless you get to the main, main, main issues, and that’s unfortunately political. As a person, as a liberal, I have my beliefs, and there are bottom line things that I believe in that I will never change on. But as an actor, you know, what a world to enter, and to participate in, to service that story.

MB: When you’re playing a character with a very different set of beliefs from your own, is that more challenging for you to get into that headspace or is it more exciting in a way?

VD: It’s very exciting, number one. You’re right, it’s so exciting. I’ve explained this before, even with friends I’ve talked about this, that it’s kind of like a Stockholm Syndrome. It requires a lot of work, a lot of commitment and time. It’s like you’re captured, and you become your captor, and you end up loving it. That’s the way I see it. Then one day it’s done, and you get out and reflect all you want afterwards. But during that period, you are its captive, and you experience that Stockholm Syndrome where you fall in love with your captor.

MB: Speaking of control, you got to work with Michael Showalter here as your director. What stood out the most to you about making the film with him?

VD: He’s an amazing director. There are a lot of great directors out there, and they’re all great in their own different ways. Michael is definitely an actor’s director. His sets are so comfortable to work on. He has a way of entering his direction to the scene in the most subtle way. When Andrew and Jessica and I were on set and we were doing our scenes together, we would find the scene and each take would get better and better. Michael knows the right way to do it is as a sort of experiment. You bring everything you’ve studied into it and then experiment while servicing the story properly.

The Eyes of Tammy Faye is in theaters now.