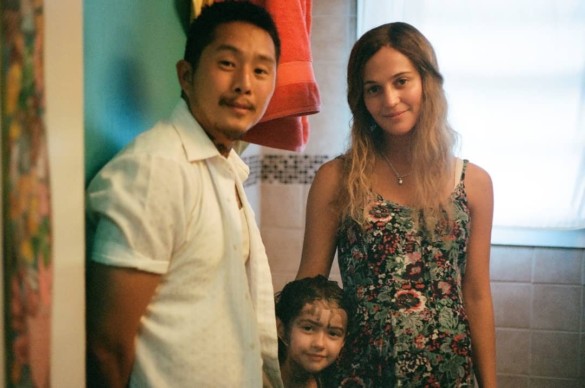 Synopsis: As a Korean-American man raised in the Louisiana bayou works hard to make a life for his family, he must confront the ghosts of his past as he discovers that he could be deported from the only country he has ever called home.

Many movie stars don’t like to be associated with a single project that they’ve done, especially if that previous project was known to be… not the best, to put it nicely. Robert Pattinson and Kristen Stewart know this all too well from their days in Twilight, and almost a decade after the last movie was released they’re both finally starting to break away from those roles. Another small actor in the Twilight films, Justin Chon, has been spending the last few years as an actor/director. Creating new films about topics he’s passionate about, Blue Bayou is the latest entry to his filmography. Often unafraid to explore intense topics in his films, Chon leans heavily into his themes of the threat of living as an immigrant in America, but his vision becomes cluttered and complicated with ideas that fail to provide anything substantial to the main narrative.

Adopted at 3 years old from Korea, Chon plays Antonio LeBlanc, a father who’s living in Louisiana where he clearly sticks out in the small town he lives in. and his adopted daughter. From the start, the film makes it clear that Antonio is facing an uphill battle. On top of the casual racism that he faces everyday, he also lives in near poverty with his wife, Kathy (played by Alicia Vikander). Carrying a felony charge with him, it also makes it harder for him to find a job to dig himself out of poverty. Chon deeply develops Antonio as a complex character, layering him with moments of genuine kindness and wanting the best for his family and taking care of his wife. However, Antonio also refuses any help and continues to make careless decisions. He’s difficult to figure out, and this only adds to the humanity of his character, especially as an immigrant. As he faces many challenges connected to deportation throughout the film, I was constantly left with questions. I struggled with why he has this obvious need to prove that he is perfect. And at a larger level, as a man who has lived his entire life in the United States, why is there a need to prove that he deserves the respect and dignity of remaining here? Humans are complex people who make mistakes often, and Blue Bayou is incredibly successful at showing how much more difficult it is for immigrants living in America.

As the narrative progresses, Chon adds more layers and complexities to the challenges Antonio is facing, even as late as almost an hour and a half into the film. The additional depth and storylines make it feel like a very lived experience. People are constantly facing new things as others come and go in their life, and rarely do we ever have one main problem that our life is centered around. While it feels like I’m watching the highlights (or lowlights) of a real life experience, it doesn’t translate as smoothly to film. It becomes confusing as to where the narrative is going, and what exactly the point Chin is trying to make, or how these additional elements are relevant. Many of the characters and subplots introduced feel entirely unnecessary to the story Chon is trying to tell, and it’s incredibly obvious that while the writing is so heartfelt, this script could have used another set of eyes to trim it down, or a few more rounds of edits.

On top of the complex narrative, as well as the complicated and sometimes unlikable character of Antonio, it was hard to emotionally connect to this movie. There are moments that really tug at the audience’s heartstrings, and at points are incredibly successful, but these moments feel more out of sympathy rather than out of a care for these particular characters. It’s like when a stranger in a parking lot has something bad happen to them. You feel bad, but you don’t really know what you can do other than just either watch or leave.

The film is anchored by incredible performances by Chon and Vikander, both delivering the best performances possible as allowed by the script. Chon is clearly connected, as he both wrote and directed the film, but Vikander makes her character feel so realistic and genuine, as if she’s someone who you actually know. The child actor who plays their daughter, Jessie (Sydney Kowalske) also delivers one of the best youth performances I’ve seen, delivering casual conversations naturally and emotional depths that would be difficult for any adult actor to access.

The themes that Blue Bayou are trying to tackle are compelling, and there’s really a great story in there somewhere. Unfortunately, that story isn’t what made it to screen. Justin Chon is a filmmaker to watch out for, and this movie will still make you think and question what your beliefs are, as well as move you emotionally, especially in the final scene. However, it’s not a film that I would willingly revisit anytime soon. While I would recommend anyone to see this movie, I would also say that maybe one viewing is enough.