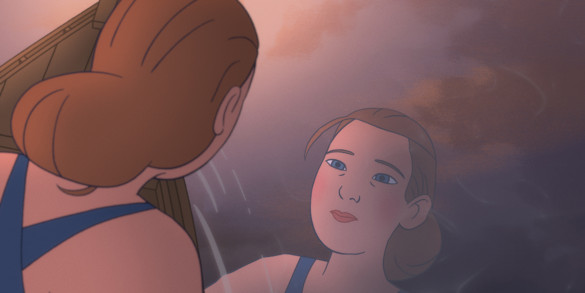 Synopsis: An account of German-Jewish artist Charlotte Salomon living in the south of France between 1941 and 1943.

Before hearing about the film Charlotte, I was not familiar with Charlotte Salomon as a person and the work that she had created. Regardless of the quality of the film, I am thankful that her story was told and that there is now an audience who, like me, is discovering who she is. The amount of works that she created over a short period of time and the trauma that she had to live through makes for a story that is hard to see, but one that is necessary to tell.

Whilst others have criticized the art style within the film, it was something I found to be quite charming. Firstly, the artworks featured in this film that are of Charlotte are recreated almost exactly and shows off the distinct art style that she had, unafraid of making bold strokes and experimenting with composition and style. Yes, the animation style is not that of the classic Disney tales or of Studio Ghibli, but there is a charm to the heavy linework and the flat colors used.

The film has a huge voice cast, something that is quite unexpected for a project like this. Keira Knightly gives her voice acting debut in the role of Charlotte, and whilst it is certainly not a stand-out or anything special, she does get the job done. Most of the voicework here falls flat to leave any mark, with Jim Broadbent being the one real stand-out in the cast playing Charlotte’s Grosspapa.

The story may be compelling on paper, but unfortunately, the film struggles to make you truly care about these characters and the journey. The screenplay presents the events in a way that is unevenly paced, speeding through years of Charlotte’s life whilst focusing on moments that just are not as compelling. There are plot points that I wanted to dig my teeth into more, and a lot of that was wanting to know more about Charlotte as a person and her passion for art. A lot of that is sadly brushed to the side here.

There is a disconnect between the audience and the story, something that only really goes away when we reach the end of the film and real footage of Charlotte and her family is shown. Maybe it is due to the choice of telling this story in the form of animation, but a lot of that does come down to the screenplay. Instead of showing Charlotte’s reaction and mindset after something major happens in her life, the film instead rushes along to the next plot point and focuses on the side characters. It creates a story that is moving and focused on the actions, but not on the emotion within it.

The strongest part of the story is the final ten minutes, which does feel like it has some weight and does create compelling character motives and emotion. Unfortunately, the film rushes to the finish line and ends abruptly, something that does seem to be a purposeful choice. I do understand what the screenwriters were going for with this choice, and it is one I might warm to more on a repeat watch, but it only left me wanting more of that for the entire film and not just at the final moments.

This is a story that needed to be told, and I am glad I had the chance to discover who Charlotte Salomon was. However, she also deserved a better film than this and I hope people take the time to do their research and look up the work that she did and how much she accomplished in her life. Whilst there are things to admire about this story, the flat writing and forgettable voice performances do nothing to bring the dialogue and the characters to life as this is a film I will forget about in a few months’ time.