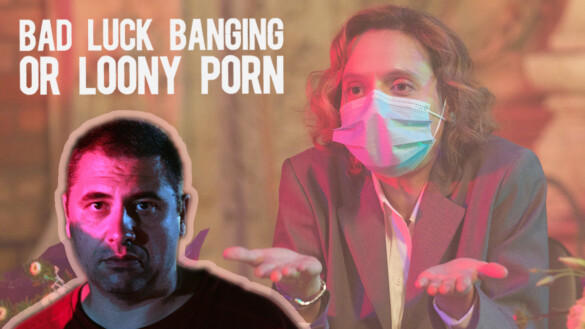 The film is divided into three sections. A frantically walk through Bucharest, a unique and often funny “short dictionary of anecdotes, signs, and wonders,” and a school meeting resembling a medieval tribunal of sorts in which a bunch of loud, sexist, fascist, and racist parents judges a woman because she was having sex with her husband. It’s like logging into Twitter: a wave of idiocy and intolerance.

Ricardo Gallegos: When Emil meets the headmistress near the start of the film, she says the following line: “The more idiotic an opinion, the more important it is.” I think this line encompasses the online experience in many ways. What was the thought process or inspiration behind this line?

Radu Jude: That line is a quote from a Polish writer from the 30s, Witold Gombrowicz, but I put it in the mouth of the character. And it’s true. Sometimes we are searching for truth and important issues and ideas, but if you change the angle a little or if you think outside of the box, you’ll discover that you can find something relevant in everything. It’s like Umberto Eco used to say, that it doesn’t matter the object of the research if the method of the research is good. It doesn’t matter if you study the words of Shakespeare or the Hannah Barbera cartoons, if the method is good, you can find interesting things in both of them.

Stupid and wrong opinions are all over us and made more visible by the Internet. It’s interesting to notice that. For instance, since Romania is only 30% vaccinated, I notice there’s this kind of psychosis going on. I saw a small documentary about a hospital where people sick with COVID-19 and unable to breathe were taking off their oxygen masks because they believed they could be infected by a Bill Gates conspiracy of some sort. They prefer to die than to give up on this idea. So this is psychosis already. It’s a tragedy that is happening here. Hundreds of people are dying every day and the country is almost on lockdown, but on the other hand, it’s interesting and frightening to see these stupid ideas spread.

RG: I see the school meeting as opening Twitter or Facebook. You see all these people fighting each other, throwing slurs around, using casual racism, weaponizing one idea to attack, lots of disinformation, but also people trying to share actual valuable knowledge and good analysis, only to be replied with insults.  So, what’s the role of social media in your film and what do you think is the role of social media in our current landscape?

RJ: It’s true. In the third part of the film, although people interact with each other in person, it’s more like watching the social media and online reactions to a situation. I modeled it not only on my experience as a father with kids (I went to a lot of parents meetings) but also on the social media craze that I noticed.

I don’t know the role of social media. It’s a phenomenon that I cannot imagine. My imagination refuses to see that billions of people are connected at the same time, it’s impossible to imagine. On the other hand, the toxic part is in the fact that it makes you want to have an immediate reaction to anything. Something bad appears on Facebook and you immediately feel the urge to say something, to insult. And I think this urge should be slowed down. If you are not sure of what you are going to say, maybe wait at least one day, two days, one year, and then see if you really feel the same thing. The quick reaction is always bad. I trained myself not to quickly react to something on social media because, at some point, I was spending entire days arguing with people over an issue. However, social media can be very useful. You can connect people with colleagues who are abroad. It’s a brilliant invention, probably the greatest invention of our time in a way, but we have to know how to use it, which we haven’t learned to do yet.

RG: I read that some of the ideas and concepts you used in the second part of the film, you collected throughout a couple of years, from the internet, from books. How did you look for these things? What were you looking for?

RJ: In some cases, I looked for images, sounds, or quotes of things related to the topic of the film. But on the other hand, as the great Italian historian Carlo Ginzburg used to say: “The book you need for a project is actually next to the book you think you need for the project”. I think that’s true. Sometimes you find a lot of good things if the mind can make certain associations. This is a film of associations. You can find things by accident, some of them I found by scrolling on Facebook, reading books at home, watching TV. You find things. We are usually consuming Internet and TV passively, but if you just don’t consume them passively, and look at them as if you were reading a novel, then everything becomes much more interesting all of a sudden.

RG: What would happen if a sex tape starring you were to be leaked?

RJ: I’m too shy to have myself on porn videos and I’m too fat to present myself like that at the moment. I think the whole sex video scandal is ridiculous because it’s a part of being a human being: sexuality and private life. A few years ago, in the nearby country of the Republic of Moldova, one candidate was kicked out from the election because a video of him having sex in a hotel room emerged and was used by the political enemies. It’s absolutely ridiculous because what’s the crime of that person? We must learn not to care so much about these things because, with the digital world we live in, there might be more parts of our private lives being exposed on the internet. So, to answer your question, if a video of me were to appear on the internet I wouldn’t say anything. It’s there and I don’t care about it. Well, I would hope it was from two years ago when I was not that fat.