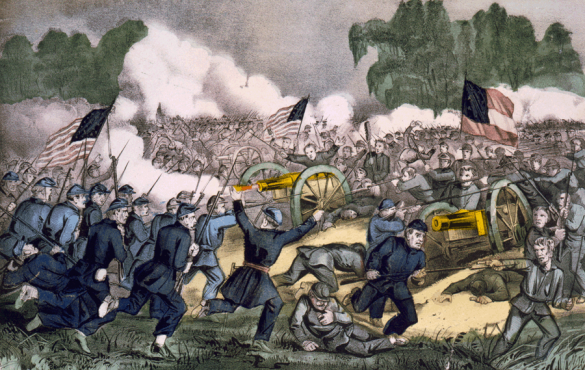 Zack Snyder is riding high following the enormous financial success of his latest comic book blockbuster, Batman V Superman: Dawn of Justice. The superhero spectacle grossed $420 million worldwide in its opening weekend and Warner Bros. has already confirmed that Snyder will continue to have carte blanche to imagine the DC Universe as he sees fit. However, you might remember that Snyder’s success has all stemmed from his stylized 2007 historical action drama, 300, which portrayed Frank Miller’s fictional account of the legendary Battle of Thermopylae.

According to Collider, the director has now revealed that he would like to approach many more battles throughout history in this manner, including the Revolutionary War. Well, we have a few suggestions of other historic battles that might be ripe for the the pickings.

This battle works on many levels, particularly now that Snyder has shown his savvy for dealing with ancient warrior women. Boudica was a legendary warrior queen of the Celtic Iceni tribe. In around AD 60 or 61, she led a massive uprising of the Celtic tribes against their Roman conquerors in which an estimated 80,000 Romans and British were slaughtered by the rampaging armies. Considering the fairly violent backstory of Wonder Woman, we can see Snyder doing justice to Boudica and company. There’s also a renewed interest in Irish and Celtic history, with Kotaku actually calling her their favorite leader in Civilization V. This could be a surprise hit at the box office.

Interest in Roman military history started to peak with Gladiator in 2000 and without it we might never have even seen a project like 300 get the green light. Not only was Ridley Scott’s movie a critical success, winning three Oscars including Best Picture and Best Actor, but it was also a massive financial success, becoming a pop-culture phenomenon in its own right. The movie even went on with to spawn its own video games. Gambling.com specifically points out a slot-themed take on the semi-fictional Rome that has players test their luck as they attempt to line up Maximus and real-life historical figures such as Commodus and Gracchus. While most people focus on the awesome gladiatorial battles, many forget the incredible opening battle sequence in the wilderness. This battle was part of the larger Marcomannic Wars between the Romans and the Germanic tribes and could be an incredible opportunity for so me intense battles and even better opportunities for some slow-motion warfare. Just imagine that ballista shooting a giant arrow in slow-motion.

The Battle of Gettysburg

It’s been a long time since anyone has done a movie about the American Civil War. Even Steven Spielberg’s Lincoln barely touched on it, taking place at the tail-end of the conflict. The last movie that really dealt with the battle was 1993’s Gettysburg, which was based on the book The Killer Angels by Michael Shaara. It’s high time to revisit this bloody battle in American history and if anyone can provide a stylized, revisionist approach to some of the darkest chapters in American history, it’s Zack Snyder. This would be a huge success for a simple reason that can be summed up in four words: slow-motion Gatling guns.