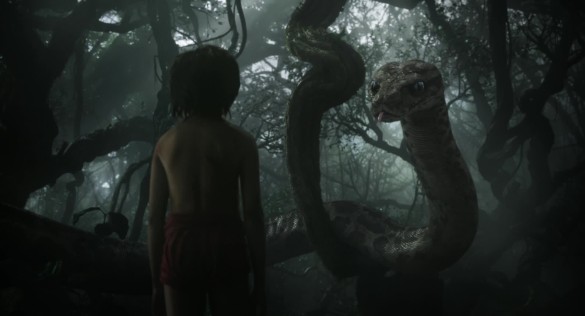 I’ll be the first to admit that when Disney started doing these live-action adaptions re-living their previous work, I was a bit dubious. Maleficent didn’t help this cause in 2014 either, and while I didn’t hate the film by any means, I found it rather uneven and ultimately unnecessary. However, I really enjoyed Cinderella last year and found it to be one of the bigger surprises of 2015. It may have been missing some of the iconic music, but overall Kenneth Branagh beautifully captured the spirit of the original and Lily James was a sweet treat.

And here we are now with Jon Favreau’s The Jungle Book. I am a fan of the 1967 animated film from Disney but I wouldn’t say I love it. So, when this project was announced, I didn’t jump out of my seat or anything. That is, until the first trailer for this iteration dropped a few months ago. When Disney released the first teaser for this film, I became instantly hooked. It didn’t quite make my Top 10 Most Anticipated of the year but I fought really hard to keep it on that list. In fact, you could say it was my 10B pick, it was that close to making the cut for me. Essentially what I’m getting at, the marketing for this film has been stellar and it has sky rocketed my anticipation, which couldn’t be higher.

There are a few other reasons for why I’m hyped about the upcoming The Jungle Book. For one, Favreau is on record saying that the technology for this film is brand new and has never been used in film before, and based off of what I’ve seen, I believe him. The effects look incredible and when you have talking animals as main characters, the effects need to be solid if the film isn’t going to come off laughable. Secondly, the voice talent is quite fantastic and very extensive. The Jungle Book will feature the likes of Bill Murray, Ben Kingsly, Idris Elba, Lupita Nyong’o, Scarlett Johansson, Christopher Walken and the late Garry Shandling. That is one heck of a cast. The only x-factor is newcomer Neel Sethi as Mowgli. Sethi has never acted in a feature length film before but we’ve seen over the last few years how that hasn’t been a hinderence, when you look at cases like Barkhad Abdi in Captain Phillips and Suraj Sharma in Life of Pi. Both Abdi and Sharma had never acted before walking onto their respective sets and both gave arguably a Top 10 performance in their given years. I’m not saying Sethi will be in a similiar camp but he could end up serving The Jungle Book just as effectively as Abdi and Sharma did. I haven’t read a ton of reviews yet but given the critical buzz for this film, I’m guessing he does a fine job.

Speaking of, I’ve already articulated how excited I was due to the film’s marketing but the critical love The Jungle Book has been receiving has pushed me over the edge. In fact, our guest for Episode 165, Eric Hillis from The Movie Waffler, put this film into his Top 5 of the year so far. The film is receiving nothing but huge critical acclaim, more than I ever expected for the film. Hopefully, when we discuss this on the show this weekend, I will join the choir of praise we’ve seen from the critical community.

There’s a lot to be excited about for this version of The Jungle Book and here’s to hoping for the best. But what about you, are you excited?