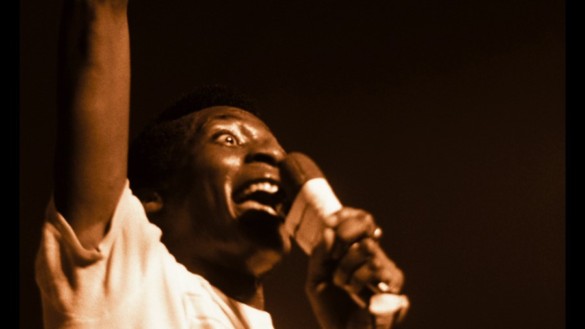 While the Olympics has been postponed for a year, I still got into watching (or rewatching) full-length feature works about the entire spectacle. It always captures the imagination to see one play for their country, everyone in one city, jammed for two weeks seeking either five seconds of recognition or going for the medal stand. Documenting the Olympics has existed in every one since 1896 in Athens, although the first few Olympics have little footage that survives to this day. Thanks to Criterion in collaboration with the International Olympic Committee, a set of documentaries from 1912 to 2012 was released with footage that exemplifies the Olympics motto, “Faster, Higher, Stronger.”

One movie that has already been covered is Tokyo Olympiad (1965) from Kon Ichikawa; another has been Olympia (1938) from Leni Riefenstahl that shows the evil genius of Nazi Germany is documenting and showcasing their athletic and artistic talents. And the Olympics’ go-to man from 1984 to his passing in 2010 for full coverage of the Games was Bud Greenspan, who Stories of Olympic Glory series personalized key Olympians in their pursuit of victory and what they’ve had to overcome. I’d recommend his first film, 16 Days of Glory (1986) to follow his specialized treatment of the 1984 Olympic Games in Los Angeles.

Here are some of these great Olympic pieces to check out, especially since most are online with the official Olympics YouTube channel.

The first Olympics documentary to receive an Academy Award nomination, it follows the 1960 Summer Olympics in Rome, just fifteen years after the war ended and was rebuilt following the downfall of Mussolini. In beautiful color, from the opening shot of St. Peter’s Square to the last event following Abebe Bikila of Ethiopia winning the marathon while running barefoot. In between American Decathlon winner, Rafer Johnson edged out C.K. Lang in a brilliant duel, Wilma Rudolph’s amazing feat of victories captivated the spectators, and, within Ancient Rome’s Baths of Caracalla, the gymnastics events could not have been more perfectly suited for.

Claude Lelouch was the hottest film director in the country thanks to his recent Oscar wins for A Man And A Woman back in 1966. A product of the New Wave, he decided to make his own documentary, one of two films on the ’68 Winter Olympics in the town of Grenoble (the other, Snows of Grenoble, can be found on YouTube as it’s the official Olympics documentary). Lelouch and group of filmmakers were in place to catch everything, from the Opening Ceremonies involving President Charles de Gaulle to nighttime bobsled runs to the skiing events that produced a national hero in Jean-Claude Killy, who won three golds in alpine skiing. Besides nifty handheld camera work, the documentary captures the simpler things during the Games: kids playing the snow, adults having a pint of beer, and tourists getting into the Olympic spirit.

Alberto Isaac was an Olympian swimmer in the 1948 and 1952 Summer Games before moving to direct features in his home country, making perfect sense that he was called to make a documentary on Latin America’s first-ever Olympics on home soil. It captures the records that befell during the Games thanks to the city being in high altitude, as well as seeing the first female to ever lit the cauldron, and, in one of the Olympics most controversial moments, captured Tommy Smith and John Carlos wearing a black glove and giving the Black Power salute on the medal stand. Two things to note: this is a shortened version of the original documentary and, as a propaganda film, it glossed over the tragedy where the government killed hundreds of protesters days before the Olympics to stifle its opposition.

Eight noted film directors, each from a different country, were hired and given a task to capture certain themes that happen in the events. Miloš Forman, Kon Ichikawa, Claude Lelouch – again, Yuri Ozerov, Arthur Penn, Michael Pfleghar, John Schlesinger, and Mai Zetterling brought something different to the film that measured each depth of speed, pain, strength, length, and sensation to athletes watched in all of the events. Watching every athlete give express satisfaction or not in track & field, gymnastics, and, for those who know basketball, that infamous Gold Medal game between the USSR and the USA. Only at the end of the film, directed by Schlesinger, is there any reference to the Munich Massacre where the Israeli wrestling team was killed by terrorists during the games.

For the Winter Olympics of 1976 in Innsbruck, Austria (one that was supposed to be in Denver until economic factors forced them to pull out), James Coburn was brought in to be the presenter in the documentary and from the first scene, where Coburn rides down the bobsled with the camera on them, viewers are in the middle of the danger that comes with motor racing on ice – bobsledding, luging, speed skating – skiers flying from above into the main stadium, and ice hockey at its physical peak. In between Coburn’s own commentary is the illustrious score by Rick Wakeman from the band Yes.

When the 1992 Summer Olympics came around to Barcelona, so much had changed and for the best. Barcelona hosting showed how far removed they were from the vicious dictatorship that existed twenty years earlier and the city went under a massive overhaul with projects that remains today a high standard of infrastructure in Europe. The opening ceremony was serenaded by the late Freddie Mercury and opera singer Montserrat Caballé with their song titled, “Barcelona,” and was a welcoming gift for IOC President Juan Antonio Samaranch. Months earlier, the Soviet Union dissolved and 12 of the 15 newly formed states came in as, “The Unified Team,” a reunited German squad, and South Africa was back in the Games after a 32-year ban for their apartheid laws. The Dream Team in USA basketball captivated fans, the cauldron was lit by a flaming arrow and director Carlos Saura made a two-hour feature that captured a bit of everything in a nutshell.