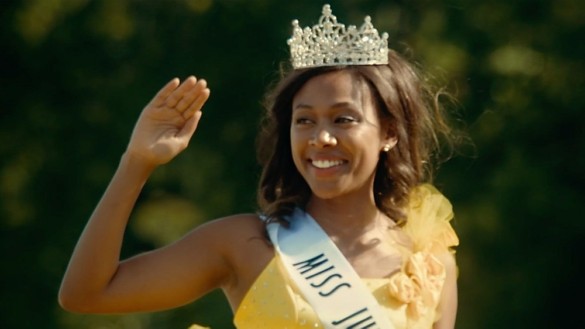 Channing Godfrey Peoples’ directorial debut Miss Juneteenth is the story of a single mom and her teenage daughter. Nicole Beharie stars as single mom and former Miss Juneteenth, Turquoise (Turq) Jones. The film focuses on the relationship between Turq and her teenage daughter Kai (Alexis Chikaeze). Turq wants her daughter to have a better life than she can provide. To her, winning the Miss Juneteenth pageant seems like the perfect opportunity that would allow Kai to achieve bigger and better things.

Miss Juneteenth is not your stereotypical “pageant” movie, it focuses more on family dynamics, the struggles of single parenting, and the differences between what parents want for their kids versus what they want for themselves. Turq encourages her daughter to participate in the local Miss Juneteenth pageant, a pageant she won herself shortly before giving birth to Kai. Participating in and winning the pageant would guarantee a full-ride scholarship to any historically Black college. Kai is willing to participate to make her mom happy, but her interests lie elsewhere. Turq isn’t your stereotypical “reality tv” or “stage mom”- she is a bit pushy, encouraging her daughter to do things as she did, but is never excessive or overbearing.

As the child of a single mother, this film hit home for me. My situation was not identical to Turq and Kai’s, but seeing a mom on screen willing to fight and work hard for whatever she thought was best for her child reminded me so much of my mother. We often don’t appreciate what our parents do for us until we are older and this movie reminded me of how amazing my mom is. I appreciate that the film shows that Turq isn’t perfect, but shows she has good intentions for what she does. Nicole Beharie is fantastic as Turq and a clear standout in the film. I hope to see her in more dramatic roles in the future.

The only flaws in Miss Juneteenth are it’s not an entirely unfamiliar story. It’s a plot we’ve seen before, but the settings and characters make this film stand out enough to encourage people to see it. I was also disappointed in how little the film addresses Juneteenth. Many people may have been unfamiliar of what Juneteenth is and its importance until very recently. In many areas of the country there is no widespread mention of it, it’s not taught in schools, and/or it’s not celebrated publicly. I figured a film with “Juneteenth” in the title would have included a little more background for viewers unfamiliar with the holiday. Miss Juneteenth does provide a little history on the holiday, but it isn’t integral to the main story. The movie would have been very similar if the pageant was not associated with Juneteenth.

Miss Juneteenth is a familiar but important film. Any movie willing to highlight the challenge of single parenting and the resilience of those families – not in an overdramatized setting – is one that should be acknowledged. Channing Godfrey Peoples’ Miss Juneteenth is real and both heartwarming and heartbreaking. It’s available to rent on multiple platforms such as Amazon, YouTube, and AppleTV in the US and Canada.