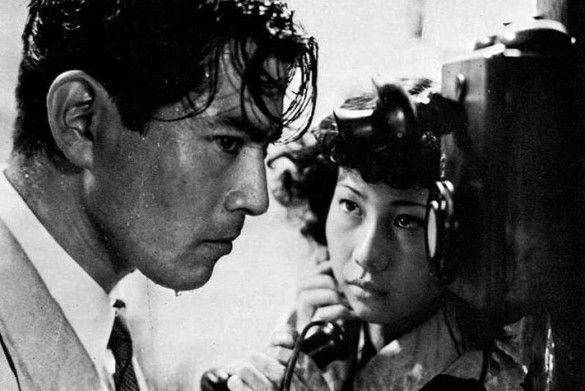 Film noir is a genre that had the aesthetics in the years before the 1940s when a swarm of crime dramas came out that in natural black-and-white, focused on the cynical nature of humans, and the common desire for money with a side of a gorgeous woman. We know about the American classics and they are truly among the greatest of this period: The Maltese Falcon, Double Indemnity, The Big Sleep, In A Lonely Place, and Touch of Evil among others. It is a genre that features masculinity, innocent people going down the wrong path, women of interest, and the common criminal who goes out there doing what he knows best – stealing and backstabbing others. The words “film noir,” are French, so no surprise the French have a solid list of films of that genre, but there are others along with the French that defines the genre extremely well.

Akira Kurosawa may be known for his samurai films, but he made his first impression with contemporary stories on the streets of Tokyo. The legendary Toshiro Mifune plays the rookie cop whose gun is stolen and used in a murder. He and a veteran cop, played by Takashi Shimura, go on the hunt during a heatwave that also defined the early years of post-war Japan of early disenchantment. It is also a buddy cop picture within the police procedure genre that takes us slowly to the underworld (which he would visit again in High & Low) where criminality is survival that raises the heat on the screen. His previous film, Drunken Angel, is another noir film that should be looked at.

Jules Dassin made great crime dramas back in the United States with Brute Force and The Naked City. He was then blacklisted during the Red Scare and exiled himself to France. His budget was low, there were no major stars, and he wasn’t totally fond of the source material, but he directed what is a masterful work on a group of thieves who plan and execute a very difficult heist, only to backfire by each others’ greed. It wasn’t the first French noir film (Touchez Pas Au Grisbi by Jacques Becker is considered the starter), but it can be argued as certainly the best. The thirty-minute heist sequence shot in almost complete silence as Dassin lays out the details of the heist as well as the conscience of the characters as everything falls from under.

Louis Malle’s debut film features two lovers whose plan to kill the husband but goes haywire when the man is trapped in the elevator after the elevator is switched off. Another couple on the run steal the man’s car and his gun, which is then used later to kill a visiting German couple. It is a four-way of lovers on the run with one couple failing to kill and a frolicking couple doing the killing and the mistaken identity factor that crosses over between the couples. The finale is the meaning of the title – a bitter irony to the events that lead up to the climax. On top of everything, the jazzy score comes courtesy of Miles Davis.

Jean-Pierre Melville had a knack for the genre as most of his works dealt with criminals and loyalty being tested with Bob le Flambeur and Le Samouri. Here, two ex-cons and a former cop collaborate to rob a prestigious jewelry store but find early trouble when they muscle a rival gangster and kill some of his men. Melville had never made heist film abut desired to do so after seeing John Huston’s The Asphalt Jungle and Dassin’s Rififi. The three criminals come from different paths and are meeting to do this risky job and equally test out who is honorable and not willing to turn heel on each other. It is about individual success and wanting to cash out rich instead of staying in the realm of failure.

This and Le Cercle Rouge are neo-noirs, the more modernized version of film noir. Still, Wim Wender’s adaptation of a Patricia Highsmith novel starring Bruno Ganz and Dennis Hopper is still simplistically crazy at the core. The tri-lingual story features Tom Ripley befriending a terminally ill man and gets him to play a hitman. The man gets seduced by Ripley’s con-man ways of thinking he can now get away with murder on Ripley’s behalf. The mood and violence say noir but the relationship between the two gentlemen don’t seem like it. As Wenders said about Highsmith’s writing, “Her novels are really all about truth, in a more existential way than just ‘right or wrong.’” The story carries with layer upon layer being placed on top as the story reaches its climax.

Film noir is not constrained to the 40s and 50s and it is certainly not just an American genre. It is something relatable and featuring certain characteristics that provide the mood regardless of country. The film noir is thrilling and has its own procedure in falling a crime in progress and how individuals think they are smart enough to go forward with a plan that mostly goes wrong. Camera work and hard-boiled pulp writing fill in the scenario. Murder goes along with the story quite well. It is a genre that is universal.