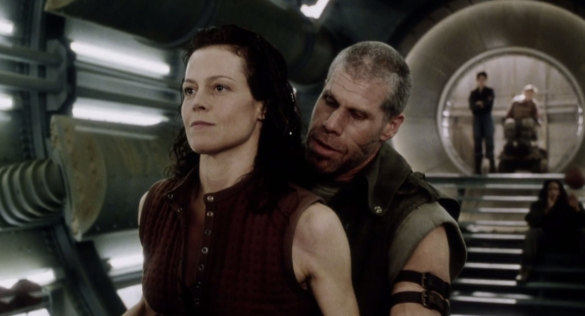 Synopsis: 200 years after her death, Ellen Ripley is revived as a powerful human/alien hybrid clone. Along with a crew of space pirates, she must again battle the deadly aliens and stop them from reaching Earth.

The fourth installments in a franchise rarely work well, and the absurdly disappointing Alien: Resurrection remains the worst of the original four entries of the profitable Alien franchise. It didn’t have to be like this. Ridley Scott’s 1979 original is a superb example of science fiction horror made with great care and craftsmanship, and James Cameron’s 1986 sequel is a breathtaking action thrill ride that never lets up. In both films, Sigourney Weaver is a terrific heroine, especially her Oscar-nominated turn in Aliens. With the strong and moving ending of the second installment, the possibilities of where the franchise could go next was endless.

But then six years later, along came the much maligned Alien 3, the feature directorial debut of David Fincher. It always strikes me as odd that one of my favorite living directors managed such a monumental disappointment on his first film. Sure, there are a few scenes of Alien 3 that work well, and Weaver is still at the top of her game, but the film doesn’t give her much to work with. I’ll always wonder the direction the franchise could’ve gone if a better third installment had been made, one that was a hit with critics and at the box office. Maybe more time and care could have gone on to the eventual fourth installment instead of the studio pursuing a faster turn-around than they did on the previous two sequels.

As it stands, the mostly hated Alien: Resurrection hasn’t improved twenty-five years later. It still has a bizarre story that only occasionally makes sense, the deceased Ellen Ripley ultimately revived as a new clone of human and alien that assists a group of space pirates, including Winona Ryder’s character named Call, into battling another deadly alien species. Joss Whedon’s screenplay certainly has lots of ideas, but they’re such a jumbled mess that the narrative never finds a desirable rhythm, the actors often look confused, and any emotion the story could potentially give the viewer is lost.

There was a lot of anticipation for the movie in the months leading up to its release—in June of 1997. For example, many people bought tickets for Speed 2: Cruise Control just to watch the Alien: Resurrection trailer before swiftly leaving the theater. Many likely thought after the disappointment of Alien 3 that more attention was going to be paid this time to making a crowd-pleasing action adventure that would satisfy fans. Hiring someone like Joss Whedon might have made sense at the time, his work on the scripts for Speed and Toy Story playing a part in their successes, and his Buffy the Vampire Slayer was about to change the face of television, but the man clearly needed some more writing collaboration on this one to give the narrative a fresher take, more focus, and characters we come to care about.

Another misstep was choosing Jean-Pierre Jeunet as the director. He’s someone capable of exciting, visionary films, as he would prove later with 2001’s Amelie and 2004’s A Very Long Engagement. But a studio action blockbuster doesn’t look to be in his wheelhouse. So much of Alien: Resurrection is murky and dark, the scenes of stilted dialogue often filmed in ways that don’t keep us engaged. Even Sigourney Weaver’s behind-the-back basketball shot she did without the aid of technology is shot poorly, the basketball going out of frame long enough to suggest the ball going into the hoop was a special effect. In the end, there are plenty of ingredients here for a successful and engaging movie, but Jeunet’s ultra-serious approach to the material makes much of the film a slog instead of a blast of genre fun.

The ensemble cast collected for the film is solid—Ron Perlman is a stand-out—and it’s always a treat to see Sigourney Weaver in an Alien film, but her revival in this narrative feels contrived right from the beginning, her character’s death at the end of the third installment ultimately the more proper sendoff. It’s sad that Weaver’s final appearance in an Alien film will likely be this one because it’s the low point of the franchise. 2012’s Prometheus and 2017’s Alien: Covenant aren’t great movies, but they were steps in the right direction, as Ridley Scott’s directorial touch felt all over them, even if the screenplays left something to be desired. Alien: Resurrection has its moments of weirdness and creativity, but it’s mostly just a throwaway film that didn’t need to be made.