Film at 25: ‘Air Force One’ is Still an Entertaining Thrill Ride 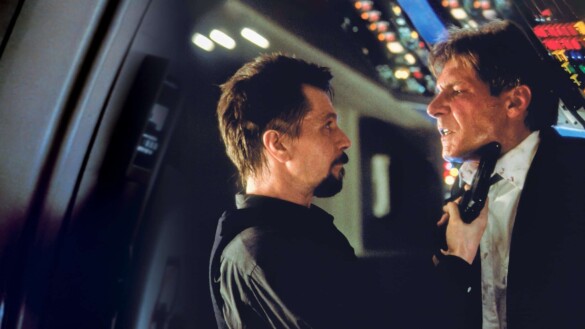 Synopsis: Communist radicals hijack Air Force One with the U.S. President and his family on board. The Vice President negotiates from Washington D.C., while the President, a veteran, fights to rescue the hostages on board.

The summer of 1997 had its share of terrific action films, particularly Face/Off, starring John Travolta and Nicolas Cage, but my favorite has always been the immensely entertaining Air Force One, a non-stop thriller of the highest order. Yes, there’s an element of predictability as to how the events are going to play out. Yes, that CGI plane crashing into a body of water at the end looks more hilariously bad with each passing year. But the majority of the movie is still a genuine blast, director Wolfgang Petersen giving the film an effective claustrophobic feel for much of the running time and the outstanding cast allowing the silly narrative to ascend to something so much better than it has any right to be.

The pitch for Air Force One couldn’t have taken long. I can imagine a head executive at Sony hearing “Harrison Ford plays the President” and swiftly giving this project the greenlight. Those five words, alas, were at the heart of the movie’s advertising campaign; most audience members willing to check this one out to see one of their favorite actors play the leader of the free world in a thrilling summer entertainment. We had seen Ford play Han Solo and Indiana Jones and Jack Ryan—who else was there for him to play next than the President of the United States?

The story didn’t have to be overly complicated, and it’s not, a group of terrorists hijacking Air Force One to enact the release of one of their own—the dictator of Kazakhstan, who was captured in part by President James Marshall (Ford). The terrorists, led by Egor (Oldman), threatens to execute one hostage every half-hour until their demands are met, the Vice President (Glenn Close) leading the negotiations from the ground while Marshall, who the terrorists believe was ejected from the plane, remains on board to help protect his wife and daughter as well as the other hostages.

So many positive elements came together at the right time for Air Force One. If this had been made five years earlier or five years later, I don’t think it would work as well. 1997 marked the end of Harrison Ford’s heyday as an action movie lead, following 1993’s The Fugitive and his two appearances as Jack Ryan in the Tom Clancy adaptations. Gary Oldman was delighting audiences as one villain after another, appearing earlier that summer in The Fifth Element. And Wolfgang Peterson was at the height of his cinematic powers, following the Oscar-nominated In the Line of Fire. Everybody takes the project seriously and gives it their all, and it shows.

This was another major studio entry in the airplane thriller genre mere months after the excellent Executive Decision, starring Kurt Russell, and the disastrous Turbulence, starring the late Ray Liotta. Air Force One is clearly the best of the three, not only the movie with the biggest budget—85 million dollars—but also with the best cast and most dazzling action sequences.

It’s a treat to watch Ford do what he does best, kick some serious ass while always remaining charismatic and real and vulnerable. Oldman reportedly turned down the villain role in Speed 2: Cruise Control to play the villain here, a good choice because this character has infinitely more substance and resonance than Willem Dafoe’s character does in the lame-brained sequel, released earlier the same summer. And how can you deny the gravitas and intelligence of Glenn Close as Vice President Kathryn Bennett, twenty-four years before this country finally saw its first female Vice President. Director Petersen wisely surrounds this Oscar-caliber trio with fantastic character actors, including Wendy Crewson, William H. Macy, Paul Guilfoyle, and Dean Stockwell.

But what works the best about Air Force One to this day is the near-constant tension aboard their airplane. Unlike other CGI-heavy action movies that summer like The Lost World: Jurassic Park and Men in Black, Air Force One for the most part keeps the action in-camera, the editing always keeping you on edge. The execution of a randomly chosen female hostage, Petersen keeping the camera close on her face as she realizes the inevitable is coming, Marshall pacing under the plane knowing there’s nothing he can do, is one of the most powerful scenes of any film released in 1997. And also, you can’t deny the awesomeness and glorious cheesiness of Ford’s delivery of the line, “Get off my plane.”

The film was a massive hit upon release, earning a worldwide gross of more than 300 million, and the reviews were mostly positive. Peter Travers called Air Force One “superior escapism,” and Todd McCarthy of Variety said it’s “quite entertaining.” President Bill Clinton reportedly screened the film twice while in office, and the film even received two Academy Award nominations, for Best Sound and Best Film Editing. Air Force One is a rare summer blockbuster from the ‘90s that still holds up remarkably well. It isn’t high art by any means, but it’s the kind of movie thrill ride I adored as a kid, and I still adore today.