Featured: Within The Iron Grip: Spanish Cinema Under Franco 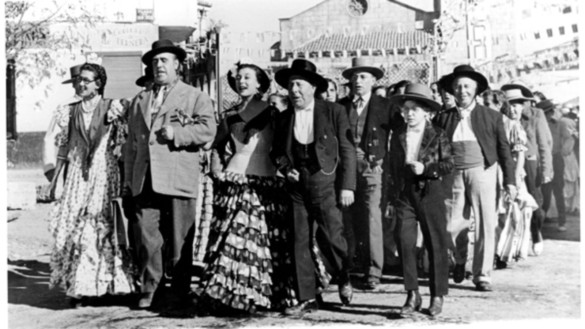 Prior to the Spanish Civil War, General Francisco Franco had actually written a screenplay that was produced. In his story, it involves two brothers, one who supports the New Republic (1931-39) and one who opposes it and remains aligned with the exiled monarchy. Upon his victory in 1939, General Franco reinstalled the country’s rigid system that banished democracy and the liberalism it once had been advocating. This included the arts, literature, and the cinema, where the poet Federico Garcia Lorca was murdered and many others were jailed or fled into exile. Picasso went to France, Luis Bunuel (see below) went to Mexico, and others scattered around the rest of Europe or immigrated to the Americas.

During his time of a quasi-fascist rule, Franco censored anything that was not Spanish nor reflective of its values – Catholicism, nationalism, morality – and thus many stories were subject to censorship. Yet, the system born from within Franco’s rule allowed some expression in cinema to be made and gave way to great films that laid the foundation of Spain’s great industry of today. This was called the Francoist aesthetic as directors used complex metaphors and secret vocabulary to make a bold statement the censors could not catch. Here are three notable directors who worked within the rigid system of Spain’s censorship and produced outlandish, fantastic movies that reflected the mood and mocked the life the country was living under at the time.

Berlanga was a master of satire in Spanish society, going around the mines laid out by the strict laws of the time. Welcome, Mr. Marshall (1952) is a reference to Spain’s reopening into Europe and a small village composed of a priest, the mayor, and its peasant population. Hearing that the Americans may be driving through town, the small village goes to ridiculous lengths to impress them. Berlanga established the stereotypical American culture and history known at the time for comic effect, but also criticism for the lack of exposure outside of Spain. In Placido (1961), the apt-named protagonist helps distribute baskets for a town’s Christmas drive while struggling to get a mortgage payment in time. In his panic, Placido finds himself caught in bizarre situations while exposing the more wealthy to donate to the poor out of “charity” than actually be helpful. Berlanga made a more direct criticism in The Executioner (1963) about capital punishment surrounding an undertaker who marries an executioner’s daughter and becomes an executioner like his father-in-law in order to keep their apartment given by the government. Filled with gallows humor, it is a satire of the state’s use of the garrote and references the excruciation a person faces in marriage and in doing such a job.

Bardem was a communist who stayed in Spain and installed social realism against the conservative backdrop of Spain. The Happy Couple (1951) tells about a husband who loses their whole savings after being swindled by a business partner; they rely on faith and hard work to survive, even though it is clear the hard labor post-war won’t them any good for their age. Death Of A Cyclist (1955) told the story of a wealthy socialite and a university professor who have an affair and accidentally kill a passing bicyclist. They cannot get help because there would be questions about why the two are together and becomes a battle of consciousness over their actions. Main Street (1956) questioned the tradition of marriage as a thirty-something woman, unmarried, must consider themselves single for life. As a way to “punish” her for not going out, a group of people tries to trick her into falling for a man but only for him to leave her; the man realizes the cruelty of this but finds himself trapped and unable to leave. Bardem, by recognizing his surname, is an uncle of actor Javier Bardem.

Next to Pedro Almodovar as the most recognizable Spanish film director in history, the atheist Bunuel returned to his native country and produced two scandalous works in defiance of Franco’s government. Viridiana (1961) is about a virgin woman who is about to take her vows as a nun when she visits her uncle. He and his beggar friends confront her with desire, even lying to her that they had raped her in order for her to stay because she is no longer a virgin. Thanks to blasphemous images that parodied The Last Supper and remarks that upended the Catholic Church, it was banned in Spain but did not prevent it from winning the Palme d’Or. Bunuel got a second chance in 1970 with Tristana, the story of a man who falls in love with a girl he had adopted as a daughter, but she seeks out to become independent when falling for a man her age. Lust by older men on younger women and the hypocrisy of the church are central themes and it gives a middle finger to the conservative values of the Franco regime.

Later films in the early 70s included The Spirit of the Beehive, a moving tale about Frankenstein and how a child saw things back then, and Pim, pam, pum… ¡fuego! which gave a more open look at the realities of the Spanish Civil War without direct attention to the government. Pascual Duarte (1976) was made prior to the fall of the dictatorship but portrayed the difficulties of life in the country as the title-character awaits death by guillotine. While The Executioner features a funny shot of the leading figure also being carried inside to do his job of killing a person, Duarte concludes with a graphic shot of the character dying slowly, strangled to a long, painful death, such as many in Spain felt once Franco took over.

As Spain slowly opened up culturally to the world, the censorship of Franco began to loosen and was removed when he died in 1975. In transitioning to a democracy, Spanish cinema opened itself to a progressive movement of storytelling that was forbidden for 36 years prior and let open the likes of Carlos Suara, Victor Erice, and, most notably, Pedro Almodovar. The Franco-era works are as essential and influential as democratic, modern Spain for its creation of social criticism within a comic context or melodrama. Some works were caught by the Francoist regime, cut, and banned temporarily, while others sunk through the cracks and have outlived the hand of repression that held a country down for most of the twentieth century.