Featured: ‘Wild Rose’ and why it speaks to me so profoundly 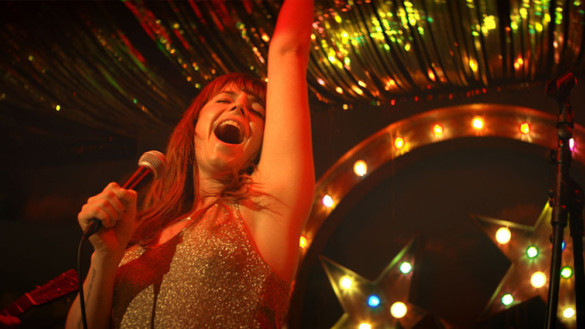 *Slight spoilers for Wild Rose below.*

If you listened to Episode 330, you’ll know that I was a massive of Wild Rose and Jessie Buckley when it came out earlier this year. Some may dismiss it as derivative, but there’s so much more with this story than its surface level conventions. In the end, I’d argue anyway, Wild Rose is more Inside Llewyn Davis than it is Rocketman. Rose-Lynn (played by Buckley) doesn’t become famous. Or have some massive record deal. Her pursuit of music isn’t too dissimilar from Llewyn (played by Oscar Isaac in Inside Llewyn Davis) in that he ends up exactly where he began. In Greenwich Village with only a local music career to speak of. The only difference is that Rose-Lynn is a mother. So while her pursuit of music doesn’t go according to plan either, there’s a part of herself that is forced to change. That in itself is fascinating, but it doesn’t stop there.

Rose-Lynn is a mother of two who lives in Glasgow and has dreams of becoming a country music star. She sings at the local pub with her band and is full of ever-ending confidence. It doesn’t quite pay the bills though, so after she gets out of jail (which we see in the opening scene), she gets a job working as a housecleaner for Susannah (Sophie Okonedo). It doesn’t take long before Susannah realizes that Rose-Lynn has major talent and could have what it takes. So she helps push Rose-Lynn toward chasing her dream. At one point, Rose-Lynn meets up with a big time producer in London who confirms that she could be a star if she stays the course. As a result, Susannah throws a party for Rose-Lynn and asks her to perform with her band. A bunch of Susannah’s wealthy friends would be there and donate toward Rose-Lynn’s cause. Things were lining up perfectly for Rose-Lynn to get to Nashville, Tennessee and become everything she’s ever wanted. There’s a couple of scenes early on where Rose-Lynn talks about how music is the only she’s really good at, and that without it, she’s nothing. Every decision she makes tethers back to her ambitions, and thanks to Susannah, it seems as if all that work/hope is going to pay off.

But…there’s always a but. Rose-Lynn has two children who are incessantly diverting her energy and becoming a burden. This is compounded by the fact that she’s hidden them from Susannah. There’s a great scene early on in their relationship where Susannah asks Rose-Lynn if she wants kids some day, to which Rose-Lynn replies, “yeah, someday, just not yet.” There’s wonderful (and heartbreaking) irony in that while she is clearly lying to Susannah, the emotional reality is, it might be her truth. Perhaps Rose-Lynn regrets having children because all they do is disrupt her ambitions. I don’t think that’s the case, though. Rose-Lynn may not be a model parent, but she’s at least aware of what she’s doing by being dismissive toward her responsibilities as a mother. She is cognizant of the effects that her neglect has on Lyle and Wynonna (her two children).

In what is one of the best scenes of the year for me, there comes a moment where Wynonna walks into the kitchen to get a glass of water in the middle of the night. Rose-Lynn hears this, walks to her in the kitchen and has a small conversation with her. At the end of it, she picks her up to take her back to bed, and when she does Wynonna intensely hugs Rose-Lynn demonstrating how much she’s missed her mom. It was incredibly unexpected because Wynonna had been distant from Rose-Lynn and non-responsive toward her since coming back from jail. Something that amplified itself as Rose-Lynn continued to pursue her ambitions, often leaving Wynonna and Lyle with their grandmother or random neighbors. So this moment of embrace completely catches Rose-Lynn off guard, and her reaction to it is stunningly poignant. Buckley’s acting in the moment is nothing short of sublime. Beyond that though, it’s an affecting scene because of the surprise element, which is the result of her awareness that her children have been negatively effected by her choices. And therefore she did not expect Wynonna to embrace her in that way. It’s the first time that the dichotomy of ambition and responsibility showed itself to her in a significant way. As time goes on, she may not tell Susannah the truth about her chilfren, but Rose-Lynn starts to pay them more attention. She looks at them fondly. The balance of responsibility and ambition may be centering out slightly.

However, that notion metamorphosis quickly when the opportunity arises to raise money by singing at the party that Susannah was throwing for her. In order to get practice time with her band, she once again pawns off her children to anyone willing or able to look after them. But now things are different. She is conflicted. It kills her inside to negate the positive relationship building she’s had with her children, but this is a potentially once-in-a-lifetime opportunity. As a young single mother, what is she supposed to do? The heftiness of this question weighs even heavier when Lyle finds himself in the hospital, and instead of being at his bedside, Rose-Lynn attempts to leave for the party. She is able to get her mom to watch the kids, but before she leaves her mom utters, “if you can’t acknowledge your children there is no hope for you, and there sure as hell no hope for them.” Rose-Lynn, without saying anything, is devastated. The next shot is immaculate as we see Rose-Lynn trying to put on make-up, but she can’t keep it together. She’s worked her whole life for an opportunity like this, but the emotional costs are getting to high and it is destroying her.

So what does all of this have to do with me? Why does it speak to me so profoundly? Well, as you may have heard on the show, I am a father myself. I have my own ambitions. Operating InSession Film on a daily basis is time consuming. Between prepping for shows, recording the shows, producing/editing other shows, writing features or reviews like this, maintaining a content schedule, building relationships with our writers, being active on social media, and everything else in between, it takes up a lot of my time. However, Sam (my son) is the most important thing in the world to me. I am not willing to compromise that at any cost, no matter how much I love what we do here at InSession Film. But I’d be lying to you if I said it was easy. If there weren’t times where my wife, or even Sam, wanted me out of the office. I’d like to think that I’m a better parent than Rose-Lynn, but the reality is, her struggle is my struggle. At its most inner core, Wild Rose suggests that many parents have dreams and hopes like everyone else, but at what lengths are we willing to pursue them if the costs on our children are severe?

This is something I grapple with daily. And like Rose-Lynn, I’ve come to the realization that there’s no place like home. Regardless of what our goals are/were, and maybe things played out differently than initially though, but there is peace and jubilation in doing the things you love right where you are…with the people you care about the most. There are many things about Rose-Lynn that I can’t relate with, but that idea fundamentally, slayed me. Profoundly connected with me.

Jessie Buckley’s raw and tender performance will linger with me for a long time. It’s phenomenal in every way.