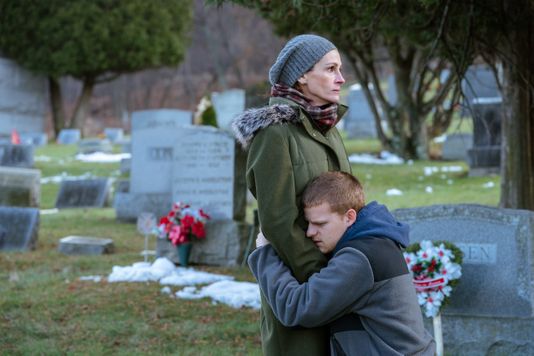 It’s about that time in the festival where I start to lose track of the days (is it still the weekend? Have I eaten a vegetable recently? Do I live at the Scotiabank?). Thankfully the diversity and quality of the festival is holding up. Let’s dig in:

Synopsis: The film follows Ben Burns, who returns home to his unsuspecting family one fateful Christmas Eve. He is welcomed by his wary mother, Holly, who learns that he is still very much in harm’s way and must prevent the family’s downfall.

Ben Is Back is two films for the price of one. One film focuses on the family turmoil caused when Ben (Hedges), the drug addict black sheep of the family, turns up unannounced on Christmas Eve and throws everything into turmoil. The second film is a crime thriller that follows Holly (Roberts) and Ben as they descend into the criminal underworld for the night.

How does one film become the second? Unfortunately not well, which is what makes Ben Is Back such an oddly polarizing film. The first half, which more or less coincides with the daytime activities of the Burns family, is emotionally and dramatically rich; Ben’s addiction turns everyday activities such as shopping at the mall or searching for a box in the attic into trigger points that could cause an outburst or a relapse. Additionally, the tension produced by the forced holiday frivolity and the way everyone walks on eggshells not to upset the peace is immensely relatable to anyone who has shared a holiday with family.

The first half of the film is capped at the church Christmas concert when Ben has a breakthrough. Things immediately go sour when the family returns home to discover there’s been a break-in, prompting Holly and Ben to hit the road on a reconnaissance mission that takes them into the dark, unsavoury parts of town. This second half of the film feels like a completely separate feature that just happens to include a few of the same characters and their backstories.

It’s an utterly baffling creative decision considering how successful the first half of the film is. There’s more than enough narrative meat to justify continuing to explore how the family adjusts to Ben’s unexpected appearance and tonally the shift from the first half to the second is jarring and unexpected.

The fact that the film works at all is attributable to Roberts and Hedges. Roberts and her megawatt smile is typically associated with romantic comedies, so this rare dramatic performance initially feels like a departure for the star. Holly is a great character for Roberts to sink her teeth into: the role requires a combination of vulnerability, exasperation, resilience and fake it ’til you make it cheer. She’s clearly terrified that without her support and intervention, Ben will end up dead and she loves her son so much that she is committed to doing everything she can to help him without ruining his life by calling the police.

As Ben, Hedges delivers yet another outstanding performance. It’s surprising to hear that Boy Erased is the vehicle garnering him potential awards buzz (credit the topic and his larger role) considering that Ben Is Back is the stronger of the two roles. Without a doubt, the character of Ben allows Hedges to show a much greater dramatic range. He’s such a complex character: filled with self-hatred and regret, but susceptible to his vices and unwilling to believe that he (with the help of others) will find a way through.

Ultimately Ben Is Back is a frustrating viewing experience because it truly does feel like two non-complementary films. The first is powerful, emotional and rich; the second is dark, grim and saggy. Had Hedges (the writer/director) stuck with the first half throughout, Ben Is Back would be a much more successful film.

Alas, this is what we get.