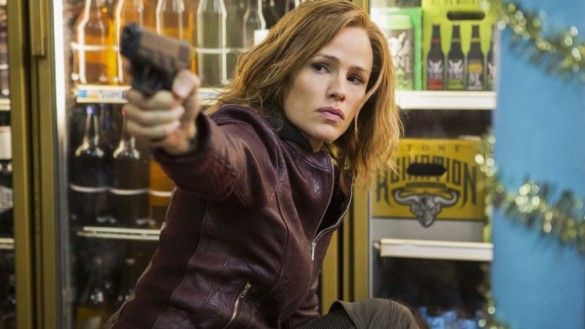 Synopsis: Peppermint is a revenge story centering on a young mother who finds herself with nothing to lose, and is now going to take from her enemies the very life they stole from her.

When I first saw a trailer for Peppermint, I thought to myself, “Jennifer Garner playing Frank Castle? I’m in!” I grew up with Garner kicking ass on Alias and I’m a big fan of the moral ambiguity and overall grittiness of the Netflix Marvel shows, so even if it looked a bit predictable and derivative, I was ready for the ride. And, for the most part, I wasn’t wrong, but I was disappointed.

Peppermint is an interesting mix of several classic action movies and TV shows, including the Daredevil and Punisher Netflix shows (a particularly bold move considering Garner’s noncanon link to the franchise), the Death Wish franchise (another bold move releasing Peppermint so close to the newest installment), the Kill Bill movies, Die Hard, and Fight Club, among others. I think it’s worth noting that the general critical consensus for Peppermint is fairly low (13% Rotten Tomatoes score and a Metacritic rating of 29, as of the writing of this review) while audiences seem to be receiving it fairly well (81% audience score on Rotten Tomatoes). I think, in general, action film fans have fun seeing the tropes and genre elements play and see the reuse of tropes as more of an homage than a ripoff, while critics (myself admittedly included) tend to find the reuse of the same tropes tiring, lazy, and predictable. Neither side is wrong, it’s just a difference in perception. If the genre in question were one of my favorites, like sci-fi or horror, I’d be on the other side of the line, for sure.

Personally, when it comes to this movie, I could have sat back and enjoyed things like Garner’s character Riley North channeling Tyler Durden for no apparent reason or imagery almost exactly mirroring images from season two of Daredevil if the script had been a little tighter and more thought out. Instead of carefully crafting characters and plot, Peppermint just throws in various archetypes and tropes together in a kitchen sink stew, stirs till it bubbles, and dishes it out. Garner’s character jumps to the crazed revenger archetype with no subtlety or explanation and neither she nor the script can seem to figure out if she’s a misunderstood vigilante hero, an anti hero, or a downright villain. The law enforcement characters have some of the most stereotypical, stiff dialogue I’ve ever heard and the villains of the movie are one-dimensional, archetypal, and downright racist caricatures whose only character descriptors include “Mexican” and “ drugs”, though they notably weren’t members of the Drug Cartel.

The plot of Peppermint also meandered quite a bit, spending way too much time on Riley North’s past when all we really needed to see was a happy memory montage, the tragic deaths, and a courtroom scene to seal the seal. Bam. Setup complete in 10 minutes, top. Instead, we spent the entire first act following Riley around when we know full well how things are going to go. Once things finally kick into gear in the second act, we spend so much time with the police officers and the villains that we almost forget about Riley.

Really, all this movie needed to do to meet my expectations was spend more time with Riley post-tragedy, not only so that we understand her character a little better but also because Garner carries this movie. The fact that we spend so much time away from her makes me think that someone somewhere down the line didn’t have faith that she could carry it. I have my suspicions as to why that might be, but suspicions aside, it was the wrong call. This movie needed way more Garner and, hey, let’s cut out the racist villain caricature while we’re at it.

It’s slightly more understandable when it comes from studio-era espionage thrillers, but it’s 2018. Do we really need Hollywood movies perpetuating negative stereotypes that are already being perpetuated on a national, political level?

Anyway, easily the biggest takeaway of this movie, for me, is that Garner still kicks ass. Alias might not hold up as a super awesome show in this golden age of television, and Elektra certainly stunted Garner’s chance at being a big screen badass, but 13 years later, she’s back and she kills it. The script may lack emotional depth and any sort of subtly, emotionally or otherwise, but she’s able to make up for a lot of that with her facial expressions and body language throughout the film. The action set pieces are actually pretty awesome, too. If I sound surprised, it’s because I am. I’m a big fan of superhero action and hand-to-hand combat, but when it comes to gun fights, my attention wanes quickly. But the action in this movie kept my attention. Even when it was at its most ridiculous and unbelievable, it was fun enough to make it worth my time.

For as awesome as Jennifer Garner and the action set pieces throughout this movie are, though, the rest of the movie, unfortunately, does too much harm to the quality of the movie overall to make this movie one I would recommend aside from to the biggest of action flick fans. Maybe if the villains weren’t so offensive I could’ve gotten past the cliches and bad dialogue but, alas, that is not the case. I’m not writing Garner off as an action star, but I am giving this movie a hard pass.