Featured: The Mind Of A Directing Madman: R.W. Fassbinder 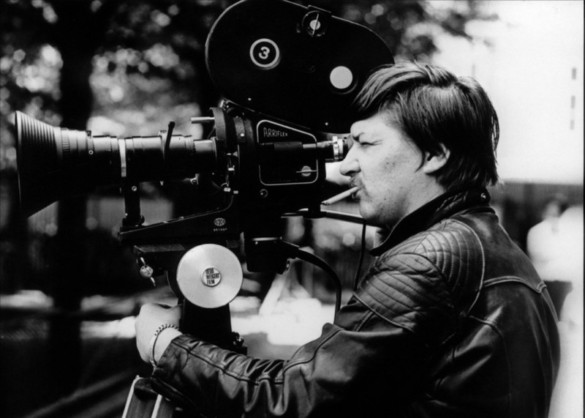 When we think of booming creative minds with loads of energy poured into their work, we tend to think Quentin Tarantino with his colorful, epic scripts or Aaron Sorkin with his extensive walk-and-talk dialogue. In terms of production, we can also think of Woody Allen and his annual film he puts out. I think of someone who does all in one and did it in a short period of time: Rainer Werner Fassbinder.

When Fassbinder was found dead in 1982 of a drug overdose, he was 37 years old. Lying by his feet were the notes to his next script about the revolutionary Rosa Luxembourg. At the same time, he was editing his latest feature film, Querelle. Fassbinder epitomized the German New Wave which included Werner Herzog and Wim Wenders. He was born at the same time World War II came to an end and struck out on his creative self as West Germany was rebuilding and flourishing economically. From the time he turned 18 all the way until he died, Fassbinder made over forty films, two television mini-series, and twenty-four plays, many of which he helped score, shot, acted in, and edited.

It is fair to say Fassbinder was a workaholic who wrote and shot films as quickly as cheaply as possible, even faster than Clint Eastwood today. He knew what he wanted and how to get it, not being a “40-take Willie” Wyler, and getting it in no more than 3 takes. His lifestyle reflected the frantic work and style of his movies, having multiple affairs with men and women, including with his actors and lastly his editor, as well as having a notable temper. His attire was notably a black leather jacket, hat, and dark sunglasses, as well as a growing goatee he kept until he died. By utilizing all of his energy, for better or for worse, he produced plenty of incredible pieces of drama that are forever part of global cinema.

Here are my Top 5 Fassbinder films, in alphabetical order:

Inspired by Douglas Sirk’s All That Heaven Allows, Fassbinder’s melodrama tells the story of an older German widow, Emmi, who falls in love with young, handsome Moroccan immigrant, Ali. When they get married, they are ostracized by neighbors, friends, and even Emmi’s family. The prejudice in Ali is sadly very similar today and so is the pressure by the couple to prove others wrong. The film was shot in just two weeks and is Fassbinder’s most powerful, direct social message in his filmography, especially since Fassbinder was in a relationship with El Hedi ben Salem, who plays Ali. The film ends with hope, but it was not the case with ben Salem; in prison for attempted murder, he hanged himself and Fassbinder was not informed of his death until he was making his last film, Querelle, and dedicated it to ben Salem. This is personally my favorite Fassbinder film.

Fassbinder’s 14-episode, 15½ hour-long TV series is based on the novel by Alfred Doblin about Franz Biberkopf who is freed from jail after serving time for killing his girlfriend. Now in a Germany thriving in the 1920s before the rise of Nazism, Franz tries to get out of the criminal underworld he’s been in but finds himself lured back in easily. No one is sympathetic, especially with Franz, a killer, but yet there is a humane portrayal of someone who just cannot catch a break in finding work in such booming city nor having a stable lover to keep him steady. Because many were unhappy about being reminded of what Germany was like in between two dark periods, the series was neglected physically. It was only saved by the Fassbinder Foundation in restoring the scratched, discolored prints that the miniseries was released on DVD in 2007.

When released, some accused Fassbinder of being homophobic with his portrayal of his leading gay characters as cynical figures who are loathing and selfish. Fassbinder played the leading character, a working-class gay man who wins the lottery, falls in love with a wealthy industrialist but struggles to conform to the livelihood of being in the upper class. It may not be happy-go-lucky, but it does go against stereotype on gay characters at the time, making them as normal as heterosexual characters who can also go through the same pains as they do. The themes are the same as he had written in movies before, where money can’t buy anything but mother’s little helper, fancy meals, and the best liquor out there.

Box office success was something elusive to Fassbinder until he came out with the first of his BRD (Bundesrepublik Deutschland) Trilogy, followed by Lola and Veronika Voss. Maria Braun tells the story of a woman who has to survive the post-War years with conflicting loves all while trying to avoid the poverty the has engulfed the country. Like in Ali, it features an interracial relationship (with an African-American soldier) and commentates on Fox’s feel that money cannot give you the love you want, but just a big house. As a film that was more mainstream, it made Fassbinder a marketable figure that Francois Truffaut later commented, “[He] has broken out of the ivory tower of the cinephiles…an original work of epic and poetic qualities.” However, the difficulties of production, including going over budget and conflict with distribution rights, made it a turning point in Fassbinder’s life for the self-destructive end that would come.

At first, I was not impressed by Fassbinder’s quick-moving story of a man struggling to make a living as a fruit peddler after losing his job as a police officer for having sex on the job with a prostitute. It seemed very jumpy and rushed. A second viewing at it and I picked up more on Fassbinder’s style compared to his other works and saw that there was nothing wrong with it. Four Seasons doesn’t linger on about him being angry at life; we know that he is angry and has contempt for others. Instead, in its quick 88 minutes, we watch the downward spiral in its complexity that stems from his experimental theatre days and attacks society as being more selfish than helpful.

Rainer Werner Fassbinder may be the ultimate director from Germany for his expressionism of a variety that blossomed and touched on every aspect of life in the country. He described his films as building a house with the foundations of the past, namely the 1950s, the economic miracle, and the country’s attempt to forget about the Nazi period. He was a rebel and someone I’d label a populist filmmaker, refusing to abide by the rules and challenging the norms, which brought him the wrath of several groups over his work. But Fassbinder was a genius who could only work and not relax, knowing that he would rather die an early death than get old and not have the same energy when he was younger. If he made it past age 40 and even saw the reunification of Germany 8 years after his death, Fassbinder could have continued to push the boundaries and upset the status quo with his biting spitfire of love, death, sex, isolation, and prejudice in a changing landscape.

P.S. – For those who are fans of Fassbinder, check below as someone uploaded (and I hope it remains up) an incredible documentary about his life featuring interviews with the crew and actors that worked with him: I Don’t Just Want You To Love Me. It is worth a look.