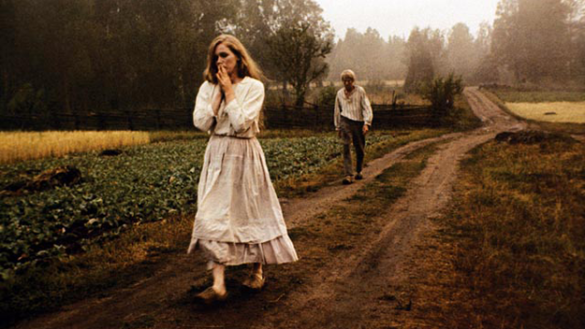 Of stories about immigration and leaving for a better life, on hardship and triumph, these films are the ultimate standout on a family journey to place new seeds in a sometimes unforgiving terrain with a brand new language. For director Jan Troell, it is the dream in America in its full view that was seen by people all over the continent and Sweden is extremely noted. In its 6.5 hours combined story, the saga that is The Emigrants and The New Land of the Swedish family’s conversion into the American psyche and cutting off almost all the ties with their homeland – a universal story about those who came to America in the 19th century.

Uprooted From Their Native Soil

The family at the center of the story are the Nilsson’s made up of Karl Oskar (Max von Sydow) and his wife, Kristina (Liv Ullmann), their four children, and Karl Oscar’s brother Robert (Eddie Axberg). Sweden in the 1850s was conservative under the restrictive monarchy and the power of the church that allowed villages to have their own laws. In Sweden, agriculture is all they have, not budging with the industrial revolution or the liberal ideologies that decentralized religion. With the Nilsson’s, living in the countryside where all they know is their farm and their tiny village, the land is weak and nothing can grow anymore. The family has to endure starvation and the death of a child, which is the last straw for them to finally make the escape. With very little knowledge of what is in America and if the promise of riches is true, the Nilssons pack up for the long voyage.

They are joined by Kristina’s uncle Danjel (Swedish for Daniel), a pastor who is considered a heretic for his style of Christianity which he and his family show humanism to a prostitute, Ulrika (Monica Zetterlund), who also goes with them to the new world. Robert’s friend, Arvid, is another farmer who comes along as one big group across the Atlantic and the marshlands in the Midwest. They learn about Minnesota through a couple who are going there to join their son. It is here where the road becomes rockier than an ocean as disease, doubt, and death plague them on the journey across. It is the same by steamboat and train heading inward. And once they settle in, it becomes a test of endurance from not the weather, but from the Sioux who are at war, the unusual terrain out West, and integrating themselves with new people.

All About The Family

As terrible as it may be, everyone has each other to get through the rough time. Throughout the film, the love for Karl Oscar and Kristina deals with the treachery of seeing setback after setback, hope diminished and relit. For the rebellious Robert, who does not think of conforming to be like his brother, it is Arvid, and they trust each other moving along with grand ideas, from moving to the first place to a disastrous, tragic hike for gold towards Colorado. Even with Ulrika, a woman who is trying to shed off her past as a prostitute and looking to Danjel as a cleansed woman, fits in, even though there is high distrust to her from Kristina especially. On the ship, Kristina blames her for bringing lice on the ship, even though Ulrika is physically clean. Later, there is a trust formally established when Ulrika finds their child that gets briefly lost on the steamboat. When condemned by others for marrying a Baptist – not a Protestant or Lutheran – Kristina defends Ulrika’s honor. The connection from one person to another is a common theme in the film because there is no one to trust but themselves as they start to explore this new terrain.

The two movies entrench themselves with the historical setting in both countries. The old land is desolate and full of rocks, the new land is untampered with fertile soil overlooking a lake. At the same time, surrounding Sioux who is angry at the new immigrants for swamping their territory (the 1863 Sioux Uprising and its mass execution is portrayed) brings a new type of danger to the Nilsson clan and everyone nearby. The American Civil War is touched upon but not spoken in depth; the danger of just wanting to have more children and the disregard for the risk of it by Kristina underscores her devotion as a mother and Christian into expanding the family after various tragedies and miscarriages. With the wealth of the new home comes a hefty price.

In the original four novels written by Vilhelm Moberg, the fight for social justice in Sweden could not have been won in the 19th century due to the strict conservative rules. As reflected by the historical result of the country, millions left, leaving the country short on labor and forcing change at the turn of the century. Moberg’s works always focused on the dispossessed and their traditions while struggling every day. Jan Troell beautifully creates that from script-to-screen (he also was his own DP and editor) and meticulously handles the backstory of the Nilssons with great bravery in this massive undertaking of the time – one that earned an Oscar nomination for Best Picture.