Featured: The Horrors Of ‘Salò, or the 120 Days of Sodom’ 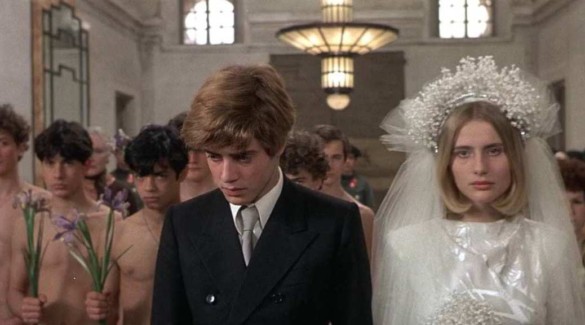 Horror does not always have to be a slasher type film. Horror does not always have to have nudity presented in a sexually attractive manner. Horror can feature a political bent to it and a style that forces the viewers to endure if they choose, the gratuitous and the indecent, the immoral and the deprivation a human can think of. For Marquis de Sade and his original transcript to The 120 Days of Sodom, his shocking, repulsive story of libertinism, power, and pleasure had the idea of one director, Pier Paolo Pasolini, to actually take it to the screen and not flinch on what is depicted. As noted, the notes below are not for the faintest of heart; it has produced anger and continuous condemnation for it being “art,” for the most graphic depictions of fetishism for sex and violence that makes A Clockwork Orange tame in comparison.

Salo Or The 120 Days of Sodom has a simple premise. Four wealthy fascist libertines in the ill-fated state in Northern Italy in 1944 – Mussolini’s last stand before his capture and execution – decide to engage in their ultimate fantasies of sadism and masochism by kidnapping 9 handsome young men and 9 beautiful young women, all mid to late teens (Marquis de Sade’s story had them younger), and force them to endure the humiliation of horrific practices before meeting a quite violent end. It is between the kidnapping and their killings that make Salo a different type of picture, making the boundaries almost limitless, especially with the aftermath of its production.

Between the extensive sexual abuse, the psychological manipulation, and acts of coprophilia, what is the purpose of enduring something that is not sexually arousing and more exploitive of human cruelty? For Pasolini, it is a message of the corruption of power and the punishment Italy received for bowing to fascism. It is self-flagellation for the sins of many, but it was the young that took the punishment. The four men and the four middle-aged prostitutes who tell graphic stories of depravity and then strip their prisoners naked are survivors who use their power to make the young metaphorically – and literally – eat the shit of the authoritarianism. They are degraded to be mere objects and never seen as a human being in their prison of horrors that is just too real to even think of.

There are four chapters to this parade of degradation: the Antiinferno, the Circle of Manias, the Circle of Shit, and the Circle of Blood. The first is mild and only the simple setup to what comes after, the prelude, if you may call it. They go to an isolated palace where the fun and horror takes place. Within this segment, Pasolini is critiquing the bourgeoise of then and now, condemning Italy’s return to a society of individual pleasure that is also taken in by corruption. As he said, “this new Fascism, armed with new means of communication and information . . . has not only scratched the soul of the Italian people but has lacerated, raped, and besmirched it forever.” Religion is not allowed, nor would it have helped.

The latter three stages is an examination of the socio-political power in which the four libertines use their sick minds over their middle-class slaves as, to put it mildly, a piece of meat. They are trophies who like to see how far they can go with them because the men have no limits. One of the men likes to anally rape his prisoners, but also likes to sodomized in return, disliking having regular intercourse with women. Another takes gratification in verbally abusing them and has his eye on two of them specifically. One prostitute says she enjoyed being molested as a child, another recounts bizarre instances with her tricks, and the four “studs,” four young men who guard the captured, are chosen only because they are well hung. Again, they are naked, unabashed top to bottom, but it is not of any pleasure to viewers. In the end, the four men don’t kill but watch from afar as the see their captured youth killed in horrific ways. I can’t even describe it; you just have to watch it to see it. None of this should be shown or done, yet Pasolini forces us to be the voyeurs to everything that goes on – and then see two studs dancing slowly to a waltz as if nothing else happened.

That leads us to Pasolini himself. He had built a reputation of shocking films and adding his Marxist beliefs within the confines of his stories. As a gay man, he was unafraid to have homoeroticism in his works, let nudity be free and attacked everyone who he felt was sending Italy to its violent climate. At the time, Italy’s “Years of Lead” was taking place between far-right and far-left organizations that the Italian government struggled to stop in the decade. Just before the film’s release, on November 2, 1975, Pasolini was beaten to death. A male prostitute was convicted for the killing, allegedly disturbed by Pasolini wanting to rape him with a stick, but many now believe it was a hit job, trying to silence Pasolini for opening a can of worms into the establishment’s past. In a sense, there was one more killing left to do in the story of Sodom and that was of the director himself.

So, why does this movie remain a piece of our collective thoughts when one sees it. Besides the shock value, Salo has a permission to be artistic while allowing the most depraved behavior to be committed on celluloid. Every time someone on Twitter says they are watching it for the first time, I warn them to be attentive for what is coming. This is a film not for the weak stomachs – it is thought to be a great date movie and I hope people are joking – and those who have not seen a Pasolini film would think of has the Ewe Boll of his time. Even with everything being seen, people still regard it in positive terms. Michael Haneke, Rainer Werner Fassbinder, and John Waters have ranked it among their favorites. “Salo is a beautiful film…it uses obscenity in an intelligent way…and it’s about the pornography of power,” said Waters. It is this dehumanization that does not leave us and its something that will not tear us away from the events.