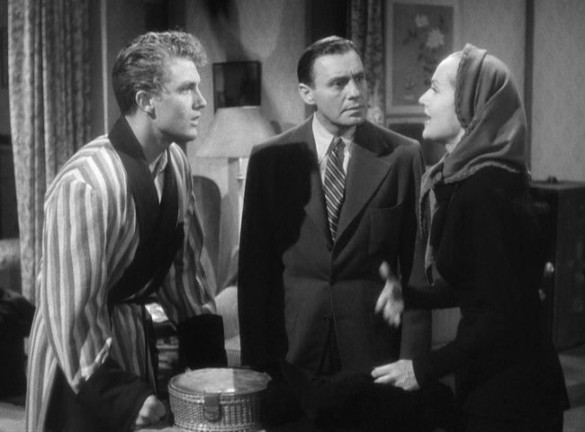 Two American painters and friends are on holiday where they meet the gorgeous Gilda. She asks them to sketch her face, finding both men attractive, seeking to play a game of “The Favourite” and seeing which man will impress her more. First, Gilda pretends she is French before revealing that she is an American like them, and then inquires, if possible, to play footsie with her two prospects to see which she likes more. Even better, have both of them live under the same roof as friends, even as the sexual tension is obvious and jealousy became obvious between the two. They agree to no sexual attempts, but what are the odds that they resist? This is the scenario in Design For Living (1933) and this is a common tease Ernst Lubitsch loved to play with without getting into details.

Born in Berlin in 1892, Lubitsch became interested in comedy and drama while acting in plays in school, joining the famous Deutsches Theater in 1910. After working his way up quickly through the ranks, he transferred to the cinema and became known quickly for his writing and directing of German comedies, establishing the humor and visual wit he would be known for (as described below). His international success invited him to America in the 1920s where he had hit after hit that continued when silent films became talkies. It is this string of hits – The Love Parade, Monte Carlo, The Smiling Lieutenant, One Hour With You, Trouble In Paradise, Design For Living, Ninotchka, The Shop Around The Corner, To Be Or Not To Be – which provided the full context of Lubitsch’s extensive style of expression. He collaborated with Mary Pickford, Claudette Colbert, Miriam Hopkins, Gary Cooper, Frederic March, Greta Garbo, James Stewart, and Carole Lombard among many other actors. In 1947, the same year he won an Honorary Academy Award, Ernst Lubitsch died of a heart attack, aged 55.

The Meaning of His “Touch”

The Lubitsch’s touch, a phrase made by the studio PR department, is many things, but his movies focus on satirizing American ideas on sex and money. From his foreign point of view, he poked at American views on these two subjects and exposed their pitfalls in how people behaved around the opposite sex and when confronted in awkward moments. In arguably his most famous film, The Shop Around The Corner, two works in a shop are unknowingly sending love letters to each other when they cannot get along in person. When James Stewart discovers that the other person is Margaret Sullivan, he is both miffed and smitten and has to dig deeper at her to find the common ground. A lot of his movies were not set exclusively in America or Europe, although some locations are notably established or mentioned. Some of the comments below explain it more thoroughly (and much better than I do).

“In its broadest sense, this meant going from the general to the particular, suddenly condensing into one swift, deft moment the crystallization of a scene or even the entire theme…..the idea of utilizing the power of the metaphor by suddenly compressing the quintessence of his subject in a sly comment – a visual comment, naturally – that said it all.” – Herman G. Weinberg

The phrase does connote something light, strangely indefinable, yet nonetheless tangible, and seeing Lubitsch’s films – more than in almost any other director’s work – one can feel this certain spirit; not only in the tactful and impeccably appropriate placement of the camera, the subtle economy of his plotting, the oblique dialogue which had a way of saying everything through indirection, but also — and particularly — in the performance of every single player, no matter how small the role.”  – Peter Bogdanovich

In other words, there is no singular definition, but a set of ideas and common denominators one can pick up in Lubitsch’s movies.

Lubitsch utilized his Jewish humor as a template through his movies on approaching ideas by squeezing in simple moments into one shot that is ironic and gives context to the whole story. Once a major dramatist, he settled on the lighter side while putting in some emphasis on contemporary themes of the moment. Ninotchka didn’t just make Greta Garbo laugh, but satire  Stalin’s Soviet agents in their attempt to sell jewels stolen from the deceased Russian aristocracy. In To Be Or Not To Be, it is a comic relief against the Nazi regime who would be having Lubitsch dead if he was still there. In Poland, he’s mixing in a stage setting of Shakespeare with the incompetence of the Gestapo, acknowledging the awful truth to what was going on in their enemy’s land. In Trouble In Paradise, filmed in the midst of the Great Depression, Lubitsch lightly touches upon the economic crisis with his upper-class leads holding on to their money too much dearly, a subtle critique on capitalism, according to philosopher Slavoj Žižek.

When Lubitsch died, Billy Wilder said to William Wyler, “No more Lubitsch,” to which Wyler responded, “Worse than that — no more Lubitsch films.” In an era where the Code prohibited risque content, Lubitsch was able to go around it directly with backhanded scenes of discreet tones, high comedy in realism, especially as his work went into the Second World War. To the end, he was able to invoke the sophisticated wit he picked up from his homeland and bring it to an intellectual level in all of his pristine works. Even the genius wit of Billy Wilder had a sign in office asking, “What Would Lubitsch do?” John Ford, Francois Truffaut, Jean Renoir, and Greta Grabo (“He was the only great director out there. Ninotchka was the only time I had a great director in Hollywood.”) lavished praise on Lubitsch, whose legacy endures with the rest of the first generation of great sound film directors.