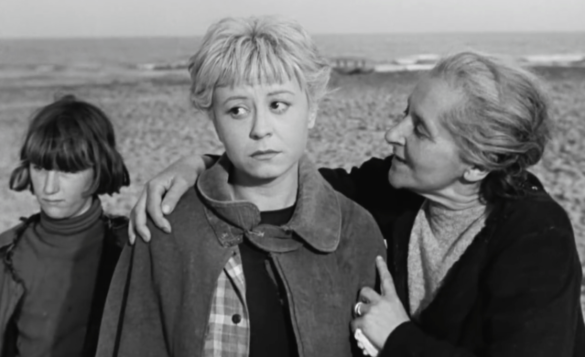 There are some actors that are just born to play a certain role, whether that be Robert De Niro for Taxi Driver’s Travis Bickle, Leonardo DiCaprio as Rick Dalton in Once Upon a Time in Hollywood or Marlon Brando in The Godfather. Sometimes it’s near damn impossible to separate the character from the performer. Such is the case for Giulietta Masina as the character of Gelsomina in Federico Fellini 1954 film La Strada. We came very close to not having Masina star in the picture, and looking back at the film it’s hard to picture anyone else in the role. Masina isn’t just playing Gelsomina, she is Gelsomina.

Upon my research for this piece, I found out that Masina was considered too old for the role of the young woman who is sold to Anthony Quinn’s strongman Zampanò and is forced into a life on the road. In Danielle Hipkins’ piece for The Conversation, she writes “At an initial screen test, the producer, Dino de Laurentiis, was hoping that Paramount would overrule Fellini’s choice of female protagonist in favour of one of the more typical Italian female stars of that period. This was the time of the rise and rise of the so-called “maggiorate fisiche” or pin-ups, such as Sophia Loren or Gina Lollobrigida.”

However, it’s hard to picture Sophia Loren being able to capture the fragility of the character. Loren’s Gelsomina wouldn’t have put up with Zampanò. The height difference between Quinn and Masina adds another layer to the fim, because the camera often positions them in such a way that she looks even more fragile and vulnerable when compared to this great, hulk-like man. Gelsomina is a character who we cannot help root for because she isn’t your typical heroine and it’s for this reason that she still remains one of cinema’s greatest heroines. She doesn’t appear ‘conventionally’ attractive, with each facial expression being extremely exaggerated but even when she’s smiling the camera will often cut to a close shot of her eye where we can see the real pain and anguish that she contains within.

We begin with an establishing shot of her lonely figure collecting firewood on a beach, and never has such a person look so delicate and fragile on the big-screen. Even before the events of the film take place, we instantly find ourselves bonding with Gelsomina from the way she is shot against the vast, endless stretching beach with the sea acting as a backdrop. Perhaps this shot indicates how there is no real escape for Gelsomina, she will always find her way back to the beach, trapped by the water with nowhere else to go.

Gelsomina’s story is a tragic fable of the perils of poverty, upon the arrival of Zampanò and the news of her elder sister’s death, Gelsomina finds herself essentially being sold for 10,000 lire. Her role in society is all driven not only by her class and social status but by her gender as well. As a woman Gelsomina has been conditioned to be obedient towards men, and even when Zampanò continues to insult her and belittles her she still remains a loyal subordinate. Even her own mother refers to her as coming out “a little strange”.

Before the opening scene ends we see Gelsomina in a state of shock, she smiles in her usual fashion before turning away and revealing to the camera and to us, just how much anguish she is in as she fights to hold back the tears. We’re only a couple of minutes into the film, and if you aren’t floored by the sheer magnitude of her performance already then by the end of the film you will be. Throughout the film there are a handful of rare occasions where we see Gelsomina genuinely happy and these occur when she is given the freedom to perform. We can see this clearly demonstrated in the scene where she plays her trumpet for the nun and this reveals to us how she uses the instrument to express her true feelings. This little interaction ends in the most heartbreaking way as the nun asks her whether she wants to say, only for Gelsomina to climb into Zampanò’s vehicle and tearfully say her goodbyes.

Fellini himself had gone on record to say that a strong feeling of guilt led him to make the film, and it is no secret that his and Masina’s marriage was strained. Perhaps the power of her performance comes from the fact that she drew on her own experiences, and that she could relate to this woman who just wanted to be an entertainer but was trapped by the constraints of society? If there’s one thing we can take away from the story of La Strada and the character of Gelsomina, it’s that behind every great showman there’s a great woman.