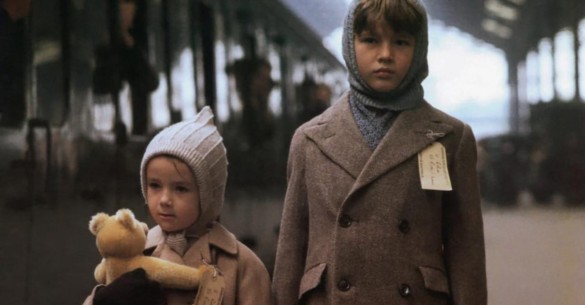 Eighty years ago, when Winston Churchill became Prime Minister and the Dunkirk evacuation saved the British army from annihilation, the UK found themselves under the Blitzkrieg of German bombs. Also called The Blitz, it lasted for over a year as the Nazis were relentless in getting the British to submit to their will before they turned their back on them to focus on the Russians. Standing alone until the Nazis invaded the Soviet Union, Britain became the signal of freedom up against a well-greased machine that sought conquest of an entire continent hell-bent on destruction for a sinister new version for the world under one flag. Thanks to many cameramen who filmed everything around them, putting their own lives at risk, it was preserved and cut to make various propaganda features while also being portrayed in fiction years later.

In 1941, the British released a propaganda film called Churchill’s Island about the defense of the country ever since his premiership began. Made from the National Film Board (NFB) of Canada, who were also at war with Germany, it is constructed of all the reel footage shot of all areas of the country’s defense, including the Royal Navy and Royal Air Force. The film won the first Oscar ever given for Best Documentary (Short Subject) and for the NFB, it was their first Oscar even after being established in 1939. They would also produce Squadron 992, which follows the barrage balloon team that serves to fight German air attacks, and The Children From Overseas, following families who sent their kids across to Canada to avoid the air raids and remain safe for the duration of the war.

When the United States entered the war and Frank Capra was hired to make a series of documentaries under the title, Why We Fight, his fourth focused on the German attack at the UK in their failed attempt to invade the island. Walter Huston narrated the story to inform the American public, especially those who really didn’t want to be in the war, on how the Nazi machine crushed the French and leaving the UK all alone in the fight. It’s an impressive and engaging piece of history which ends with the famous line said by Churchill, “Never was so much owed by so many to so few.” Other notable documentary shots from the propaganda machine include The Call For Arms, London Can Take It, and Dover, which follows the town of the same name which served at the frontline of the battle and was narrated by Edward R. Murrow.

There is obviously the titled Battle Of Britain from 1969 which brought in the best actors from home to take part in this flying epic. Lawrence Olivier, Trevor Howard, Christopher Plummer (as a Canadian pilot), Susannah York, Michael Caine, Robert Richardson, Robert Shaw, Ian McShane, and Michael Redgrave. It was a large scale film with amazing flying sequences that got caught up in the anti-war feeling over Vietnam and failed at the box office. More notably and with more acclaim is Mrs. Miniver, which was shot and released in the middle of the war, but while it was a Hollywood production, it brought a sense of pride for British viewers and gave a sense to Americans what families were doing under constant threat. In 1987, John Boorman wrote and directed Hope and Glory, based on his personal experiences surviving the war through the eyes of a young boy.

More recently, there was the comedy-drama Their Finest by Lone Scherfig (An Education) about the Ministry of Information’s program to make movies for boosting morale. A script girl and her artist husband scramble to make a movie based on two women who survived the Dunkirk evacuation and get an eccentric group of people to make the picture. It’s a charming film about writers and directors, something relatable to those who want to create. Mrs. Henderson Presents from Stephen Frears told another funny true story during the Battle of Britain of a British socialite (Dame Judy Dench) who partners with an impresario (Bob Hoskins) to make a successful show featuring nudity, even though it is technically not allowed to show it. It is the creative freedom to impress and defying the threat by staying open among the bombs that rained over them.

It’s a period during the Second World War of doubt because the British were thought to be sitting ducks against the unstoppable Germans who tied themselves to the Japanese and Italians, seeking to install a New Order on the world. The United States kept out for the meantime, but thanks to the propaganda machine, sympathy was built up to prepare themselves for war. This period also served as the basis for many movies like the entire war did. And, as we enter 80 years of this horrible conflict, they serve as moving pieces of history to a turbulent time.