Featured: Jumanji – A Review From The Darkest Wild 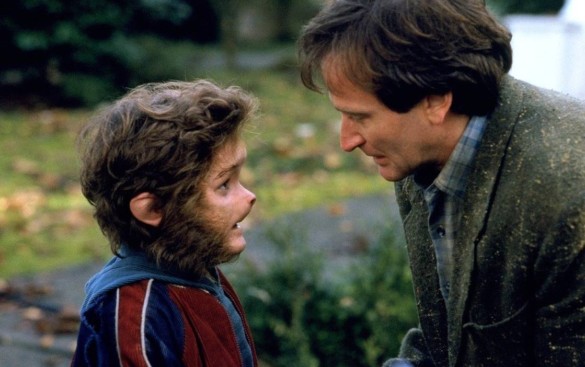 Hello one and all, and welcome to the first in (what I hope) will be a long line of reviews I post on this site. But before I get ahead of myself, let me explain:

My plan is to write two different types of reviews. The first (which follows below) will be a look back at the films of my childhood, in a vain attempt to point out how my viewing habits growing up were better than yours. The second (to come at some point in the next few weeks) will be myself reviewing a “classic” film that I’ve watched for the first time. It will be a lame attempt to get myself to finally watch those films that cause people to say “You’ve NEVER seen…” over and over. How well this works, we shall see. But for now it’s on with the show!

With a continuation of this 1995 film in the works (not to mention the “meh” spiritual sequel “Zathura”), it seems only natural that my first entry in this nostalgic look back should be a film that holds a special place in my heart. Those who know me already know how big a fan of Robin Williams I am. The fact that my infant daughter will grow up in a world where there are no new RW films being made is a sad one for me. However, when I start to introduce her to the films of this late great man, I will probably start with this one (OK, Aladdin first, then this. No need to write in!). This film starts off with a simple premise. A child called Alan Parish, who I must admit bears a striking resemblance to myself as a child, has a fractured relationship with his father and wishes to run away before being shipped off to boarding school. A classic trope, but this was before all these tropes had become waaaay overused. And not long into the film, we’re introduced to the titular game. The idea of this game basically is (for those who haven’t seen the film, and if you haven’t then I ask “Why not?!?”) that you start playing, roll the dice, have your piece move and try to make it to the end if you can. It’s the “if you can” that’s the fun part. For 8 year old me, “A game for those who seek to find a way to leave your world behind” was a fantastic premise. I’d never seen anything like what occurred on screen before, and to be honest I’ve not really seen anything that similar since.

Alan gets sucked into the board game in a sequence which looks dated now, but was really state-of-the-art back then, and the girl he was playing with gets chased away by bats. So, in the first 20 minutes we’re introduced to these characters and then it’s all “Bye now, let’s bring in some new ones!”. And,of course, we know they’ll be back. But that’s not the point. It’s something that’s not done much now, where a film can throw something at you like that and then move on for another 10-15 minutes before giving you a proper continuation of that thread. In a time of instant gratification in film, I always look back on this one as an example of what I want to see when it comes to pacing and structure. And yes, I admit I just said that about a “kids movie”. So sue me!

The strangest thing about this film is that Robin Williams is not the star. Yes, he’s bigger than life, he’s the main character for 85% of the time Alan is on screen and he’s VERY funny with a dry wit that you don’t see much in kids films. But the star of this film is Jumanji itself, or rather what Jumanji does to the town. Every time the dice is rolled, you’re waiting for the next thing to derail their game. Whether it’s a stampede that arrives through a bookcase, a hunter who is an eerie doppelgänger for Alan’s father or even just a policeman riding a door on a torrent of water (trust me, it’s better if I don’t try to explain), everything that Jumanji throws out opens up a new thread that is a joy to follow. Even small things like spiders become an obstacle to be dealt with, though I’ll admit that the spiders were the least interesting ones.

I’ve heard people coming down on both sides of this film, and my wife has stated that she has no feelings one way or the other. However, I cannot look at this film without having those twangs of nostalgia. Every lion roar, every Van Pelt interaction and every time the writing on the board squirms into view I get excited. It’s almost as if the director and cast managed to take a child’s imagination and put it directly on the screen. It’s D&D for the little ‘uns. It’s something unique. And it’s always going to be one of my favorite Robin Williams films. And I’m not just saying that because I want to look like him when I grow up, like this film seemed to show I would!

Now, I’ve been trying to think of a rating system for these films. And, to be honest, I don’t think I can have one. These films that I’ll be talking about (at least in the nostalgic look- backs) will be ones that I obviously enjoy immensely. Every entry would get 4-5 stars or 9-10/10. However, I think I know what to do. So, from now on, these films will not be rated by content. These films will be rated by how young they make me feel. And so, for the inaugural review, I give Jumanji a rating of…

5 year-old me in my Thunderbird pajamas*.

Thank you for letting me ramble, and I hope I’ve given you the nagging thought that “Maybe I should watch Jumanji again”. I honestly think your inner child will thank you.

Until next time, and remember…. If a box starts drumming, RUN!!!

*Yes, I owned Thunderbird pajamas. You may now all have a good laugh.