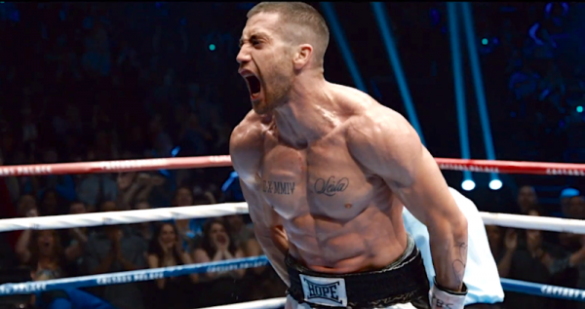 In Hollywood, there seems to be an obsession with boxing where two competitors usually face-off in a battle that’s bigger than the sport. The problem with all this films is that the plot is pretty much the same. Southpaw is the latest film that puts Jake Gyllenhaal in the squared circle. Southpaw has all the same boxing clichés that you would expect: the fall, the comeback, the climactic fight. The main draw for this film to me was Gyllenhaal and Rachel McAdams. Jake Gyllenhaal has owned every role he has done as of late, especially in NightCrawler. McAdams to me can do no wrong.

Billy Hope (Gyllenhaal) who after winning the World Light Heavyweight Championship gets advised by his wife Maureen ( McAdams) that it’s time to hang it up. Hope is challenged by an upcoming boxer named Miguel “Magic” Escobar but he refuses as he wants to respect his wife’s wishes. Tragedy leaves everything taken from Hope, and he will need to raise again to reclaim his family and his status.

This film is maybe six boxing films too late to be a top 10 film because it’s very predictable and puts the focus in the wrong places. One place they could have put more focus on was the relationship between Hope and his daughter Leila (Oona Laurence). The moments with them were easily the best moments of the film and showed Hope as a man first and not a fighter.

Director Antonie Fuqua (The Equalizer) along with cinematographer Mauro Fiore (The Equalizer) again do a fantastic job of making the film’s four fights thrilling and entertaining. The opening bout starts off like an HBO-style fight where we rarely get an up close view of the fighters. The last fight, however, we get an intimate viewing of Gyllenhaal’s mean mug, and I love it.

The thing that saves this film is Gyllenhaal’s performance. Gyllenhaal’s eccentric presence, awareness, and self-indulging behavior dance circles around Kurt Sutter script. McAdams, I love you girl, but that accent needs to go like away like bad breath.

Southpaw is a recommended if you like boxing films or if you are a fan of Gyllenhaal’s work.

You can also listen to our review of Southpaw on Episode 127!