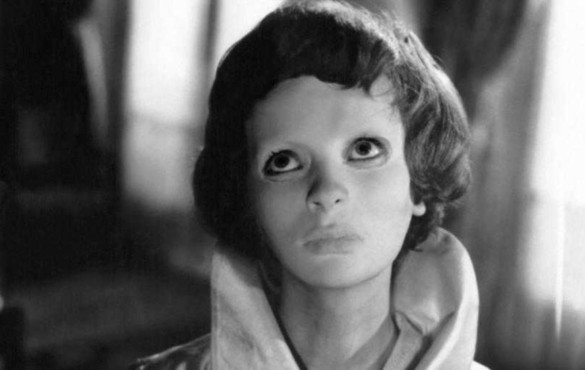 Dr. Génessier’s idea of a literal facelift and his intent is horrifying yet understanding. It is obsessive to right his wrong for the sake of his daughter’s beauty wrecked at his dispense. For the exception of one tremendous point-of-view shot of an unwitting victim who sees Christiane as she is, it is only a mask that represents her face, one that is plain with no marks – one that Dr. Génessier wants. She wants the new face, but cannot stand the mask, initially has animosity for the girls who are pretty and perfect but is conscious about being so separated by agreeing to be dead to others. The scene in which we see the graft is a brilliant montage of dead silence as we cut between a sweating Dr. Génessier, an equally nervous Louise, and a close-up of the kidnapped woman’s face as the scissors cut and are inserted on the edges of her face as the skin is pulled off. For one moment, right before we fade to black, we see – in black and white – a bloody surface. Equally impressive is the montage of a review on Christiane’s process: necrosis.

By now, the tide of the COVID-19 virus has swamped the world and the United States and normalcy... Read More »