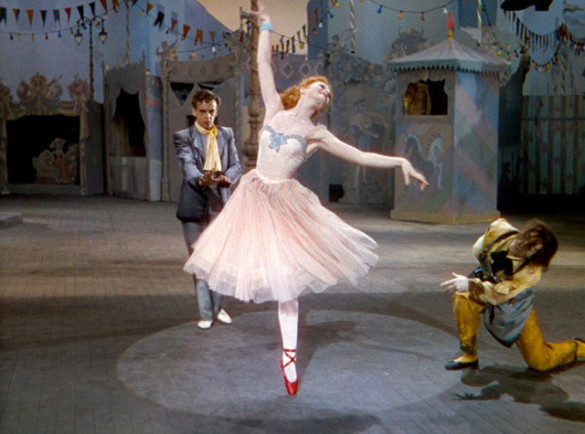 From 1939 to 1972, Englishman Michael Powell and Hungarian émigré Emeric Pressburger collaborated on 24 feature films. Some of them would be duds, others would be classics forever part of the influencing generation of movies that many directors would cite later. The first film they worked on was 1939’s The Spy In Black directed by Powell with Pressburger hired by legendary film producer, Alexander Korda, to do script rewrites. That would follow with two more anti-Nazi movies, Contraband (1940) and 49th Parallel (1941), both directed by Powell and scripted by Pressburger, who would win the Academy Award for Best Story – it was separate from Screenplay back then – for the latter film. (The legendary DP Frederick Young and director David Lean also worked on the film starring Lawrence Olivier, Leslie Howard, and Anton Walbrook, and garnered a Best Picture nomination.)

With these consecutive successes, Powell and Pressburger decided to forge an official partnership for their next film, 1942’s One Of Our Aircraft Is Missing, and adopted the name, The Archers. The following year, in the opening credits labeled as Archers Film Productions, the distinguished archery bullseye was seen with the joint credit “Written, Produced and Directed by Michael Powell and Emeric Pressburger.” The launch of their successful enterprise would produce consecutive hits.

Although no one is named Blimp, no one actually dies, and the title comes from a popular comic strip, it was an attractive way to get people come over and watch in beautiful Technicolor the romantic war satire about a General and a Prussian officer who fall in love with the same woman three times (all played by Deborah Kerr) in the span of forty years, from the Boer War (1899-1902) to the First World War to the Blitz at the start of the Second World War. The film is positive to British forces, but many including Winston Churchill were deeply concerned about how the film portrayed officers and gave some sympathy to a German one and objected to them using actual military uniforms and vehicles. But it was a success when released and reanalysis sees the film, as Stephen Fry put it, “what it means to be English.”

The next three were low-key romances more homely to the countryside and attached to the country’s aftermath of the war. The first followup was A Canterbury Tale, the story of three individuals who find themselves salvaging the land they are lost in to get the Canterbury and speaking of Anglo-American unity while the war rages on. In I Know Where I’m Going, an independent woman finds herself trapped on an island during a storm while heading to meet her fiancee. On the island, she soon finds herself attracted to a naval officer who is a descendant of a family curse that haunts an old castle, and he wants her to stay with him. It is romantic and magical and done in black-and-white with limited resources. They shot on location at the Isle of Mull, giving the story authenticity of the stunning scenery surrounding them.

Finally came A Matter of Life and Death, a romantic fantasy which can be argued as similar to Here Comes, Mr. Jordan, a film remade in 1978 as Heaven Can Wait. In this case, it’s a fighter pilot (David Niven) who speaks to a female radio operator as his plane is going down and should die. However, the designated interceptor to bring him to the Other World fails to catch him, and the pilot is shocked to be alive. But the dead guides try to convince the pilot he actually has to be dead, but is falling in love with the radio operator, the pilot now has to appeal a jury of dead descendants that he deserves to live longer. The mix of Technicolor on Earth and black-and-white in the Other World mixed with the scale of the sets that The Archers kept expanding into their larger-than-life stories.

Returning to gorgeous Technicolor, The Archers would make two bold films that would define them in their work and in their vivid creativity with enchanting backgrounds and eventually be considered among the best British films in history. Both were shot by Jack Cardiff who won for Black Narcissus and The Red Shoes would get a Best Picture nomination and win Oscars for Original Score and Art Direction. These are both films about the senses, one in the Himalayas with nuns and the other about the love triangle surrounding a beautiful ballet dancer in which, like the fairy tale from Hans Christian Anderson, she becomes befallen to certain powers. Obsession is key to both and the rich color they use is still among the best use of cinematography in the world.

In Black Narcissus, a covenant is established to help the locals establish a school and a hospital with the support of a young prince in the region. But the beauty of their surroundings in isolation conjures up the feeling of sensual jealousy with the nuns and a handsome British officer present. In The Red Shoes, a Russian dance impresario hires an unknown dancer and a music student whose original score was copied for his recent show. It installs the bitter rivalry between musician and businessman over the new sensation being found on the stage. She was a swan and her end is a beautiful swan dive invested in the power of her magical shoes.

Their works in the 1950s did not achieve much success. David Niven was forced by MGM to do The Elusive Pimpernel and Gone To Earth had Powell & Pressburger butt heads with producer David Selznick who disliked the final product for British release, but had the rights to re-edit, reshoot, and retitle the whole picture known as The Wild Heart, which was also disastrous. Even though The Battle Of The River Plate and The Tales of Hoffmann brought some acclaim and was directly cited by George Romero as, “the movie that made me want to make movies,” by 1957, with the failure of Ill Met By Moonlight, the two agreed to part ways creatively but were friends for the rest of their lives. They would reunite as Pressburger would write two Powell-directed films not labeled as The Archers, They’re A Wired Mob (1966) and The Boy Who Turned Yellow (1972).

In 1981, the duo were awarded the BAFTA Fellowship Award, a lifetime achievement for their contributions to British cinema. Emeric Pressburger died in 1988, aged 85; Michael Powell followed in 1990, aged 84. For the last six years of his life, Powell was married to Martin Scorsese’s longtime editor, Thelma Schoonmaker, who currently runs his estate and works with Scorsese, a longtime fan of The Archers, to preserve their work. Time Out’s 100 Best British Films included six films on their list, The Red Shoes (#6) and A Matter of Life And Death (#7) in the Top 10. Four of them would be on BFI’s Top 100 and The Red Shoes peaked the highest at #9. (Powell’s controversial Peeping Tom, made after the two split up, was also listed.) The Archers remain a source of inspiration with their achievement in color films, fantasy stories, and the power of infusing two minds into one for a massive partnership unseen at the time.