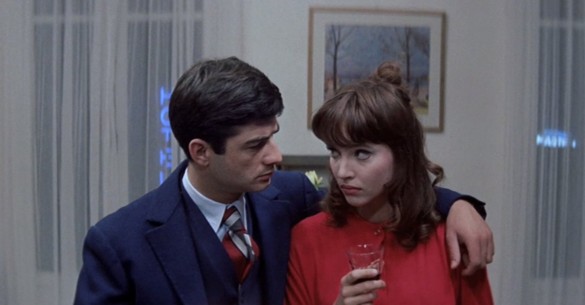 It’s time for another inside look at the updated Criterion Channel website. I had written this before the stay-at-home lockdowns began, but the movies are still online and still reflective of what I thought about them. I wish I had a sponsor so there can be money made from it. (Criterion themselves perhaps?) Anyway, here are the next set of films out there, including one major collection from one major director. It’s amazing how long my queue is on watching films for the first time or rewatching them after seeing it years earlier. So, to my readers, two questions: 1) Is my writing good or rubbish? 2) Any movie, any region, anything historical of movies should I write about? Please, be honest.

In one category, 22 movies by the avant-garde, politically charged director, who turns 90 this year, can be seen in one place. From Breathless to Band of Outsiders, from Tout Va Bien to his latest, The Nature Book, Godard’s works are out here and it’s good to see them because it shows what he has done post-New Wave. His musical comedy tribute, A Woman Is A Woman, his sci-fi noir Alphaville, the Communist-friendly La Chinoise (as Godard has always identified himself as a Marxist), the daring modern tale of Hail Mary, and the narrative essay which won Best Picture from the National Society of Film Critics, Goodbye to Language can all be found right here. The one that may be surprisingly good is A Married Woman, a discussion on consumerism within a moving love triangle.

Burt Lancaster won the Best Actor Oscar for his portrayal of a con man who uses his charismatic charm to insert himself in a touring revivalist church. Gantry is by no means a religious man as he loves to drink and be with women, especially partnering up with the church’s leader, Sister Sharon Falconer (Jean Simmons). Upton Sinclair’s novel in 1927 enraged religious leaders, yet the story is influenced by the controversial Aimee Semple McPherson, an evangelist who gained followers through her weekly radio sermons and faith healing ceremonies, but may or may not have faked her own kidnapping and had many domestic problems that were scandalous. Considering how someone can easily abuse the faith under the guise of freedom of religion to get ahead, it’s no surprise that writer/director Richard Brooks stormed in and, besides winning his Oscar for Adapted Screenplay, made a bruising statement against so-called “Charismatic Christianity.”

Released on DVD/Blu-Ray last December, you can now see Wim Wenders 4+ hour sci-fi epic that takes us past the new century in a desolate land with a German woman (Solveig Dommartin) being led by the mysterious and wanted Trevor (William Hurt), who has stolen a machine from a secret research project. This took more than a decade to get the funding for Wenders’ road movie, which reportedly cost $23 million, and failed miserably critically and commercially, in part because Wenders was forced to cut it to under 3 hours when his personal cut was approximately 287 minutes. This version has now given the movie better standing with critics and opened a new audience thanks to the massive soundtrack for the film. Wenders asked multiple artists including U2, The Talking Heads, Nick Cave, and R.E.M. to make new songs that were futuristic and would play out during the movie.

Based on Anton Chekhov’s play which was adapted to the stage by the great David Mamet, Andrew Gregory, the subject of My Dinner With Andre, came up with a radical idea to recreate the story in modern terms by rehearsing in front of a selected audience the story with no costumes, just as their assigned character. You see Gregory walking down the street and entering New Amsterdam Theatre (located on 42nd Street), which was falling apart before Disney came to the rescue and refurbished it for today’s Disney stage shows. Wallace Shawn played the titular professor Uncle Vanya while Julianne Moore played Yelena, Vanya’s very young wife. For Gregory and Shawn, they reunited with director Andre director Louis Malle in what was his last feature; he would die the following year of cancer, aged 65.