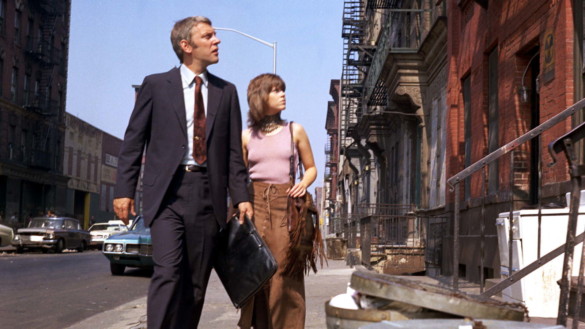 A few more full Criterion editions online but a few other categories where these films were lifted from makes up my next edition of Criterion Cruising. It took me a few months, but now I’m going to call this that. Remember, I’m a writer- in progress, so please forgive me. Anyway, he’s a few more films of interest I found through The Criterion Channel.

Alan J. Pakula directed this thriller about a private dick (Donald Sutherland) who tries to find a man missing for a year and tracks down a call girl (Jane Fonda) who can possibly help. The woman is paranoid about everyone as someone is stalking her and Det. Klute races to trace the down the probable killer of the missing man and two other women. It’s the first of Pakula’s Paranoid Trilogy, which also featured The Parallax View and All The President’s Men. Fonda won her first Oscar adding to the skyrocketing fame she received after the sexy Barbarella and her public opposition to the Vietnam War and advocacy as a feminist.

One of Jack Nicholson’s early performances that set the stage for his greatest performance in One Flew Over The Cuckoo’s Nest is Hal Ashby’s The Last Detail. Nicholson plays Billy “Badass” Buddusky, a Signalman First Class in the Navy who lets loose and doesn’t play the rules of the military. He and his friend “Mule” Mulhall (Otis Young) are ordered to take a teenager (Randy Quaid) to the brig to serve his 8 years in prison and a dishonorable discharge for petty theft. Along the way, they decide to give the teenager his last taste of freedom: drinking, smoking cigars, brawling, and picking up prostitutes. It’s a road trip about rebellion within the establishment while also following their orders; the use of “fuck” was said a lot more than the studio can handle (imagine if they saw The Wolf Of Wall Street back then), but it was a major success anyway. Its sequel, Last Flag Flying, was released in 2017 by Richard Linklater.

Peter Greenway is a special director, because, for him, it’s the image first, not the story. Greenway was a painter first and still is and used his knowledge on different eras and styles of painting to shooting his film. His most known is The Cook, The Thief, His Wife & Her Lover because of its strict formalism and scenes of scatology and graphic nudity. Here in A Zed & Two Noughts, Greenway puts his interest in zoology and a set of twins who study animals. When a tragic accident occurs, the two begin an obsession with things that decay, from food to animals to humans. It is a circle of life and then the next stage that becomes the focal point in Greenway’s adventure into primal ideals.

Argentine director Lucrecia Martel made her debut with this tale of a dysfunctional family in a decaying country home and the matriarch who struggles with pain, alcoholism, and self-pitying people who get on each others’ nerves and no place to hide. The title is translated as “The Swamp,” because of the rain and the murky feel to the entire film and that every character is detailed. It splits up the time to follow every person and what their personality is. Adults are lazy, except the maids who the mother distrusts, and the children are just mindless people who don’t think straight. It’s based on Martel’s own memories of when she was young and living in similar circumstances and a hidden view of the country’s establishment being shaken.

After the difficulty of the Weinstein-backed Mimic (Del Toro said, “It was a horrible, horrible, horrible experience,” doing the film), he returned to his native language and a script he developed years earlier. Set during the final months of the Spanish Civil War (1936-39), a child is sent to an orphanage after his father is killed fighting against Franco’s forces. There, the boy learns about another child from the orphanage who went missing, now possibly dead, and has visions of him reappearing. The opening line of the film is a question, “What is a ghost?” Del Toro, using his love for monsters and the supernatural, answers this question about the living dead and how history can come back to haunt us for time. It is symbolized by the bomb stuck in the ground that never went off, but instead of that, there’s something more equivalent to the horror from Del Toro’s back pocket.