Featured: Anticipating Eye in the Sky and remembering Alan Rickman 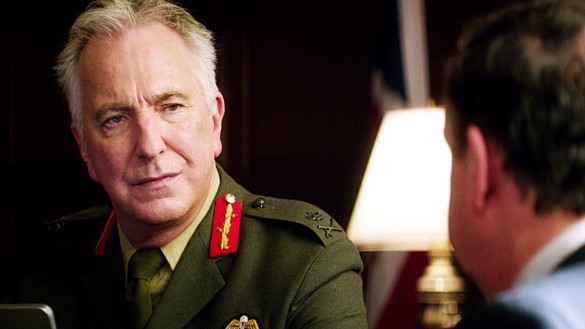 This weekend will be bittersweet. We are very much looking forward to Eye in the Sky, the latest film from Gavin Hood starring Helen Mirren and Alan Rickman, among many others. One of the names that stood out to me among this cast was Barkhad Abdi, who stole the show in 2013’s Captain Phillips, a performance that was nominated for Best Supporting Actor at the Oscars that year. Abdi has only been seen in small TV roles since then, and while this isn’t a high profile role either, it’ll be nice to see him on the big screen again. He had a small role in Sacha Baron Cohen’s The Brothers Grimsby as well but we skipped out on that particular film.

While it’ll be fun to see Abdi on the big screen again and Mirren is always a treat to watch, this is mostly about Rickman for me in terms of anticipation. This will be the last time we’ll see Rickman on film and I know it’s going to be a gut punch the moment I see him walk on screen. Rickman was such a talented character actor and he’ll be one we miss dearly. Most people will remember him as Hans Gruber from Die Hard or Professor Snape from the Harry Potter series (and for very good reason) but his career goes beyond those roles. His performances as Sheriff of Nottingham in Robin Hood: Prince of Thieves, Colonial Brandon in Sense and Sensibility and Metatron in Dogma prove how well rounded he was as an actor. And how can you forget his role of Harry in Love Actually, a character full of complication and conflicting choices that leads to one of the films most potent emotional moments. Regardless of the film or role, Rickman always brought nuance to the performance and always knew where to take the character. Of course, the most famous examples of this is Gruber and Snape. Those characters are iconic for a reason. Our good friend DJ Valentine, as well as others, will argue to death that Gruber is the greatest villain of all-time, regardless of genre. It’s hard to argue with him. Being the Harry Potter nut that I am, Snape will always be one of my favorite characters in the fantasy genre. The ambiguity cloud circulating Snape’s motives is well written but Rickman makes it feel so visceral and real.

It will be hard to watch Eye in the Sky and not think about all of this every time I see Rickman on screen. I had the same problem watching the last two Hunger Games movies with Philip Seymour Hoffman. But here’s the thing, Rickman is such a great presence that even though my emotion will be swelling, I have no doubt he will settle me into the film and his role within it. Eye in the Sky looks intensely riveting and seems to be asking some pivotal questions regarding ethics as it relates to modern warfare. And I can’t wait to see how Rickman, Mirren, Abdi and others like Aaron Paul fit into this particular story and event.

How about you? Are you excited for Eye in the Sky?