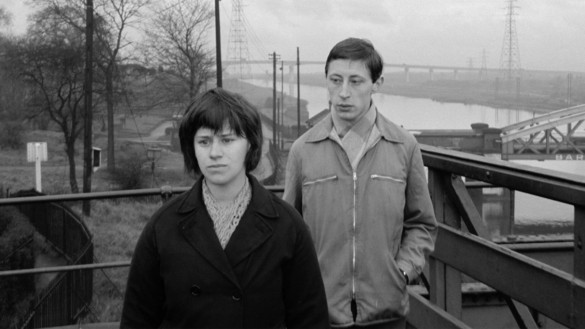 In 1959, when the Conservative Party, nicknamed the Tories, won the General Election, then Prime Minister Harold Macmillan proclaimed, “You’ve never had it so good!” This was if you have seen The Crown, a time where conservative values triumphed and things like abortion and homosexuality was illegal, divorce laws made it hard to obtain one, and issues like teenage disillusionment, unwed mothers, and adultery were swept under the carpet. But in the late 1950s and early 60s, the times were starting to change. Under a new generation and a new type of genre, the British working class and their cut of life were depicted in brutal terms. For the establishment, it was a shock, but it was real life in the UK. On stage and on screen, they brought a sense of truth to cut the rubbish from the fantasy others would prefer to keep quiet.

Through the works of John Osbourne, Tony Richardson, and Karol Reisz, new actors came about and groundbreaking shots entered the conscience that crossed the ocean into the States. It is a time that has been tapped and depicted and re-examined, brave to talk about taboo subjects artistically and with power. Consider the following themes and its impact on British (and American) society:

Look Back In Anger first appeared as a play before being adapted to the screen in 1959. Starring Richard Harris, it tells the story of an educated but discontented blue-collar worker in Wales who has a hostile marriage living in a cramped one-room flat. The wife is from upper-middle-class origins and the story plays upon the difference in background between the two figures. Harris was a virtuoso actor and his performance shows this in the dysfunction between the couple and attempts by their friends to keep the piece. It was also one of the first films directed by Richardson, who would make several more in this category.

Another blue-collar film is the Albert Finney-leading Saturday Night And Sunday Morning (1960), in which a young factory worker named Arthur likes to spend his weekends drinking with his friends while having an affair with a married woman, played by Rachel Roberts, even as he starts to follow a young woman his age for a true stable relationship. He has no support from his parents, which  Arthur describes as being, “dead from the neck up.” Soon, he faces trouble when the married woman becomes pregnant through him and she wants an abortion, something illegal until the late 60s. It is set in the town of Nottingham, far from London’s clean-cut ways. With both films, they are men stuck in a rut frustrated at having a life on the lower income of the bracket.

Victim was released in 1961, 6 years before homosexuality was decriminalized. Yet, the film portrays homosexuality as sympathetic when a respected lawyer is blackmailed for having an illicit affair with another man. Dirk Bogarde, a gay man in real life, struggles to tell his wife and the police about the blackmail because it is still an offense. When he is found out, his home vandalized with, “Farr Is Queer.” To put it in perspective with this subject, you can look at Oscar Wilde and Alan Turing as men punished by Victorian laws, as well as Sir John Gielgud, but did not suffer a vicious end as the latter two. Being outed as a gay man meant permanent ostracization. Its frankness about the subject in such a time was groundbreaking.

A Taste of Honey was, like Look Back, a play then adapted by Richardson. Written by Shelagh Delaney when she was only 19, a 17-year-old rebellious girl named Jo decides to move out on her own. After an affair with a young black sailor, she becomes pregnant and finds friendship through a young, gay man, who does not say he is gay but is strongly implied. Meanwhile, Jo’s mother, selfish and cruel, has no really no interest in her daughter’s well-being. It is another story of class and sexual orientation but mixes in interracial relationships and a positive look at gays at a time where integration and sexual scandals were public and no longer a secret. The performances and dynamics of two people who are alone and have to rely on each other are reflected in the young man’s comment to Jo: “You need somebody to love you while you’re looking for somebody to love.”

Sport Off The Field

This Sporting Life brings back Richard Harris and directed by Lindsay Anderson about a professional rugby player who is successful and popular but cannot get his romantic life in order with a widow played by Rachel Roberts right after her performance on Saturday Night. With the same power he brought in Look Back, Harris shows the roughness of his character with roughness in the center of the pitch and in the direct relationship with the woman. If rugby is about tackling, the physical ravages are equated by the emotional bleakness of the two. It does not look like any relationship, not so lovey-dovey, because of the equation as to what a struggling relationship in an isolated setting feels like. Here, it is not about the examination of social classes, but all strictly in the coal mine towns around Yorkshire where happy endings are just a pipe dream.

The Loneliness Of The Long Distance Runner centers around a young, talented man, but it is an attack against conformist views. Here, Colin, a teenager who was caught for theft is sent to a juvenile center (or an Approved School) and gains special rights because of his talent in running. It is a story of “them” vs “us.” Michael Redgrave, the father of Vanessa Redgrave, plays the center’s overseer who is a believer that these juveniles can become good members of society through hard labor and reestablished discipline. Colin’s running is virtually his get-out-of-jail-free card, stating, “Running has always been a big thing in our family. Especially from the police.” With no one who understands him, Colin must either conform to society or refuse to be another stiff in the establishment.

Billy Liar is about the combination of frustration and loneliness that is covered up through the fantasy of a better world. In a more upbeat film, Billy dreams of being a writer and getting out of his hellhole setting of Yorkshire and constantly daydreams, balancing realism and escapism. Although he wants out, Billy is also indecisive about how he wants to go and which girl – one of them played by Julie Christie – he wants to take with him. Like how Tony Richardson makes multiple appearances, this is the second one by Tom Courtenay, who was also the lead in Lonely Runner. Based on the novel and play by Keith Waterhouse, it was directed by John Schlesinger, who later won an Oscar for Midnight Cowboy (a recent Criterion release).

Alfie was the formal introduction of Michael Caine, playing the womanizer who breaks the fourth wall and talks about his sexual escapes for his own pleasure. He doesn’t see women as a love attachment, but “it,” and he finds himself lonely, making him reexamine his life. It is a comedy but does play up to the social engagement of the man who is a libertine and self-serving and not aware of the consequences of his behavior. This was released towards the back end of the British New Wave in 1966 and its content forced the Motion Picture Association of America to adopt a PG rating when they began two years later. Still, even with promiscuity in a comic context, the film was a hit.

With the addition of the darkly comical plays by Joe Orton, the era of the mods and rockers (check out Quadrophenia, The Who’s 1979 rock opera film), and the counterculture movement the lay ahead, kitchen sink realism took the audience out of their comfort zone and into their own backyard. It is not the backyard that was always seen or what many dreamed of, but the lives of others who, even after the war, felt left out of the debate and could only do cheap jobs and have their pints. All of the writers and actors came from middle-class backgrounds who burst onto the scene and would make their mark for the rest of the 20th century. This type of filmmaking, coinciding with the French New Wave, produced a power that radicalized the following generation of actors, writers, and directors like Gary Oldman, Helen Mirren, Roddy Doyle, Emma Thompson, Stephen Frears, and Daniel Day-Lewis.