Movie Review: ‘Hot Summer Nights’ is fun and stylish and it made me miss the 90’s 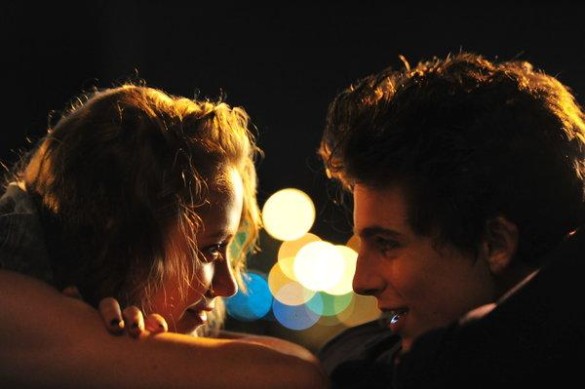 Synopsis: A boy comes of age during a summer he spends in Cape Cod.

Hot Summer Nights is the first film that I was aware of being released through DirectTV Cinema (Although it was later re-released through A24). In fact up until this point I was unaware a film could go direct to DirectTV although the naming convention might suggest otherwise. Nonetheless taking this into consideration may have you assuming it would be just a mediocre piece of cinema otherwise it would release to theaters to a wider audience. But don’t be fooled by old stereotypes, Hot Summer Nights is not your typical film and Elijah Bynum is not your typical first time director.

Hot Summer Nights starts off solemn introducing its main character Daniel Middleton (Timothée Chalamet) with a quick back story revolving around his father’s death. This is meant to help catch the audience up to his current circumstances and also to develop his characters direction a bit. A quick note, the film uses an interesting method of storytelling by having an un-introduced character narrate over the action on-screen. Not knowing who this character is and their connection to the story might seem odd for some; early on I was a bit puzzled and dwelled a little on the connection but as the film continued on the narration faded into background noise. In a way the narrator acts as a surrogate for the audience while at the same time providing us important and sometimes intimate details. Using this narration Writer/Director Elijah Bynum takes his time illustrating a setting for the story providing some background on Cape Cod and its occupants during the early 90’s. This sets a good tone and pacing for the film and, along with the soundtrack, does an impressive job of immersing you in that 90’s vibe. Try as you may to resist but you WILL reminisce.

The film follows Daniel as he spends his summer as a new kid in Cape Cod adjusting to his new life. The meat of the story focuses on his involvement with a brother and sister, Hunter (Alex Roe) and McKayla (Maika Monroe), with a turbulent past and seemingly damaged relationship. Daniel first meets Hunter through a risky and awkward encounter (Ironically I just realized this describes how he and McKayla meet as well) that leads to them becoming friends and eventually business partners. It is not a spoiler to mention that their business was selling narcotics, specifically marijuana, to town folk. It’s a business Hunter has been managing well but Daniel coming on board leads to some increase in profits as well as an increase in risks and as these kind of stories always go this combination eventually comes to a head with Daniel and Hunter both having to question where their priorities stand. As their partnerships develops we are introduced to McKayla and after some pushing and pulling they eventually form a connection. The film handles both of these relationships well, they are believable and you can see how each has its place in Daniel’s world and actually pose as separators between the two different lives he is living.

In regards to Hunter and McKayla’s strained relationship the film hints at some squabble that caused this rift between them but doesn’t dig much deeper. It’s very apparent to the audience that the two siblings prefer keeping their distance and this is used as a mechanism for drama as neither Hunter nor McKayla are aware that Daniel knows of and spends time with the other. This deception of course plays out later in the films final act in predictable fashion. Bynum juggles this all well but if you start to analyze a bit it can be hard to fathom how both relationships are kept secret. The film does a pretty good job of establishing both Hunter and McKayla as popular figures around Cape Cod, especially Hunter who has a reputation for being that typical rebel bad boy as well as a notorious drug dealer. Knowing this its difficult to believe that Daniel could be spending hours of his day with each without anyone in town noticing or it somehow getting back to other. Not something to dwell on, it did make me pause but I was capable of shrugging it off for the sake of just enjoying the story.

Overall Hot Summer Nights does a good job of keeping the story moving and Bynum’s particular style keeps things fresh and engaging. This is a huge strength of the film, Bynum’s directing style may seem similar in execution and tone to others but he adds his own touch. He manages to take the composition of a scene and have it directly relate to how its cut. If a scene involves a lot of energy or action he uses quick cuts and clever ways of transitioning between takes. Or if the scene is heavy with romance or sentiment he will slow it down and let the audience sit in the moment while using shots pulled away or flowing along side a moving subject letting us absorb the beauty and emotion being conveyed. His vision isn’t innovative or anything we have not seen but it is striking and something that really grabbed my attention and drew me into the story. I was surprised to see Bynum currently had no other work under his belt or in development but I hope we get to see more from him. Along with Bynum’s visual flair the soundtrack also drives the story and is a significant part of the experience. If you have seen Baby Driver than you will have an idea of what I mean. The musical choices to frame each scene are excellent and I found myself looking up old artists and tracks to earmark for later listening pleasure. How important the music is to the film becomes apparent right from the start with some steady Linda Ronstandt in the intro and when the film is ready to kick into gear it goes full on Roxette. It is all meant to add to the nostalgia and to provide an authentic 90’s experience but it is done very well and keeps the tunes pumping throughout.

Hot Summer Nights is mostly a fun time with a great cast and captivating story but it is by no means perfect. My biggest complaint is as the film starts drawing to a close you begin to feel it losing its legs. The story drags on a bit too long and more disappointing is that the conclusion is just not satisfying. It eventually treads down a common path laid by numerous other films of similar narrative. Because of this it quickly becomes tiresome and mundane, there is a very distinct contrast between the final act and the rest of the film which can be jarring. It is disappointing because up until this point the film had my full attention and if Bynum would have provided a more compelling conclusion this film would have easily made my top ten maybe even top five for the year.

Even with the final act being so anticlimactic when the credits began rolling I still found myself looking back on the film overall in a positive light. For everything Bynum gets wrong in the final act he makes up for in fun and inventive storytelling in the first half. Hot Summer Nights will not likely not make many critics top tens for 2018 and because of Bynum’s directing style I could see how many won’t find this film all that fascinating, especially if they aren’t a fan of the 90’s. For me the film captured a lot of the qualities and ideas that I enjoy in a cinematic experience and I would definitely consider it worth a watch. Also considering this is Bynum’s directorial debut I am looking forward to seeing more of his vision in the future.