Featured: A Magnificent Butchering – My View Of A Would-Be Masterpiece 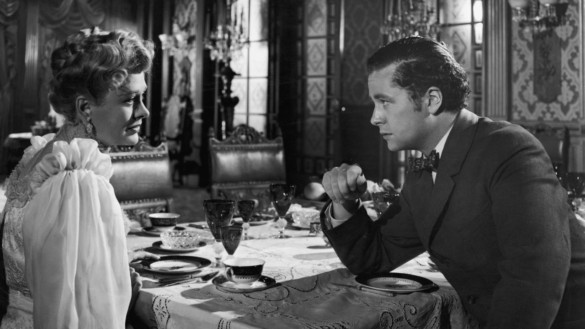 In November, I was very lucky to have won the National Association of Film Critics (@NAFilmCritics) prize of a copy of Criterion’s new release, Orson Welles’ The Magnificent Ambersons. I had not seen the film but was very well aware of its history on Orson Welles’ directorial career. This was his second feature, after Citizen Kane, and the results would alter the course of his career behind the camera and of the entire feature. Having read about it, I was ready to watch another marvelous picture. Instead, while I liked it, I also saw to what the now-defunct RKO Pictures did to it and create a legend of what the audience never got to see.

A Family On The Decline

The story surrounds the titled family who is among the wealthiest families in the Midwest. It is the latter half of the 19th-century when the forces of progress come directly at them and they fail to adapt to the times. With the automobile as the single symbol of the upcoming 20th-century, the family’s wealth dwindles to the industrialization of America as family conflict divides them apart until all are dead or impoverished. The theme of nostalgia surrounds them, with the inside of the family mansion maintaining its throwback, aristocratic style, never aging and never aware that a new social class has formed that plays the biggest role in modernizing the country.

The movie’s length is 88 minutes, but it was an extra hour longer on its first preview. Welles made cuts which then put the general release to under two hours, but the studio panicked when previews leaned towards negative. With the country mobilized for WWII, Welles was recruited to go to South America as a goodwill ambassador and shoot a movie in Brazil (one that would never be finished) and could not return to edit it. Even though he telegrammed scenes to cut, the studio decided to completely redo the film by their terms. There were some scenes, including the whole new ending, reshot after principal photography by different cameramen. Stanley Cortez, who went on to shoot the noir classic The Night Of The Hunter, was replaced later in the production because of conflicts with Welles, and at least two other cameramen worked in reshoots. The main editor was Robert Wise, who would go on to be a successful film director in his own right with West Side Story and The Sound of Music. But, as the film’s editor, he was placed in the unfortunate position of following orders.

First of all, you will notice the brisk pace in which scenes go through time quite quickly in every major moment of the story. While it doesn’t feel rushed, you will notice how much the story seems to stop and skip in beats unusually. There were many long takes and was simply seen as excess. The biggest victim of the cuts is the ballroom scene where we witness a large party take place and then, in its jump through the story, seems to abruptly end when there’s more to be offered. This was a good chunk of the film excised from the original cut. Another obvious notice is the missing frames that will cause the film to go black for a second before coming back on, even though the sound remains present. Even the lighting can feel much different and uncharacteristic to Welles, which is where the reshoots and inserts come in. Finally, the change of ending completely throws off the whole mood of the entire movie, from full melancholy to something fairly hopeful in the future.

That leads to the question of the cut footage. The Shakespearean moments with more darker references were part of the cuts along with the long scenes shot. The answer: to make room in their storage, RKO took it all and burned it. No full print of the original version has been found, not even in the Orson Welles’ estate. This is one of the greatest tragedies of American cinema and the missing footage is among the top lost films today. This could be to spite Welles, as many resented him from the day he arrived at RKO. The original screenplay in its entirety does survive and so do still photos of scenes cut.

Why Ambersons Still Has Power

Even in its shortened, butchered form, The Magnificent Ambersons is still a testament to the greatness of Orson Welles. He directed the film and adapted it from the Pulitzer Prize-winning novel by Booth Tarkington, who was friends with Welles’ father. In his direction, Welles utilized advancement in his camera to capture the entire set from its glory days to the bleak end. As time goes on and the story goes outside the mansion, we see the small town get bigger with modern buildings and signs and the full establishment of a train station. He kept some of his Mercury Theatre actors and brought back Bernard Hermann for the simplistic, paradoxical score; Hermann supported Welles and demanded his name be removed from the credits. Then, there are the final credits, which is a voiceover by Welles, naming the crew and the actors before identifying himself, under a single shot of a microphone, as writer and director.

The performances as an ensemble reach out from the screen to where see and feel the wave of emotions by all. Agnes Morehead is the one that stands out; as Fanny Minafer, the aunt, she is the main witness of this family collapse that explodes in a brilliant fit of mania. The performance earned her an Academy Award nomination. In addition, Joseph Cotten as Eugene Morgan, the beneficiary of the new automobile, plays the middleman in between old and new generations and fights with George Amberson, played by Tim Holt (Stagecoach), the spoiled son who tries to stop Eugene from courting his mother, Isabel (Dolores Costello), who he once fell for many years earlier. This strange love triangle adds to the melodrama and the tension between switching fortunes.

What happened to the film to see it in a demented form is just tragic because it’s not what Welles wanted. You can say he directed it, but it is not his vision because the studio saw the film as a flop. And, it was regardless but is a travesty to film history. What is still left of it, the half-Welles, half-RKO version does keep a gorgeous portrayal of an American life now long gone and the downfall of a legacy. It is compared to Visconti’s 19th-century epic The Leopard made twenty years later, but in color and on a grandiose scale. But this again is Orson Welles putting his vision on another level that was not seen in America in the early 40s which were responded to by rejection of mainstream Hollywood.