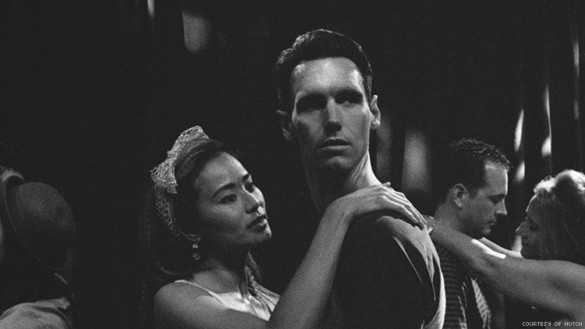 Synopsis: A closeted young man goes home for the holidays and struggles to reveal his dire circumstances to his conservative family.

We all crave communication. We want to be in control of what we share about ourselves and with whom we share it. When we find ourselves unable to communicate those deep feelings we have, it becomes frustrating and painful.

Director Yen Tan’s new film 1985 focuses on a young man named Adrian (Cory Michael Smith) who is returning home for the holidays. As the film’s title suggests, the story takes place in the year 1985 around Christmastime. It’s been three years since Adrian has been back to Texas to see his family. He left home to go to New York and work at a large advertising agency. As the film begins, he is somewhat of a blank slate – we don’t know much about him, and his reserved nature holds him back from communicating. As the film continues, we learn that Adrian has another reason for holding back from communicating with his family members – he is gay. In 1985 in a conservative community, that wouldn’t have been information one would assume to be received well.

The film is shot in beautiful black and white photography which adds to the feeling that this is almost a historical document. It does not depict a real-life story, but the cinematography and muted camerawork give the feel of a documentary. We are watching the components of this story unfold in a focused manner.

Personally, I related to the film’s conservative, American context. I grew up going to a Baptist school in northern Indiana. To say it was a strict environment would be putting it lightly. I’ve always appreciated the way my parents, especially my mom, taught me not to blindly follow. This idea that just because someone in authority says one thing is right doesn’t mean you should refrain from testing it yourself. I learned to have reverence for authority and the way things are but with a healthy dose of autonomy.

Adrian’s family members showcase different elements of that conservative context. Dale (Michael Chiklis) is the strict, Vietnam-vet father. He values loyalty and frugality, even to the point of balking at the expensive Christmas gifts that Adrian buys for the family. Eileen (Virginia Madsen) is your quintessential mom. She is loving, caring and maybe just a bit old-fashioned. At the same time, there’s more to her than you might pick up on right away. Finally, there’s Adrian’s younger brother Andrew (Aidan Langford). He is at an awkward stage where he doesn’t really seem to fit in. With each family member, Adrian finds himself unable to fully communicate throughout much of the film. In fact, the only one he can really talk to is the family’s dog, who listens to Adrian with complete acceptance.

The film’s other main character is Carly (Jamie Chung). She’s a childhood friend of Adrian’s who now lives 45 minutes away in Dallas. While he’s home, Adrian reconnects with her and it’s clear that the two shared a previous fling or two. Now they consider each other old friends, but as those dim flames reignite, they find themselves at a familiar place for Adrian. They are seated next to each other at Carly’s apartment, both experiencing feelings of deep passion but completely unable to understand one other. The connection ends in a fight that leaves Adrian doubting the future of that relationship.

The acting is of high quality all around. Cory Michael Smith, Michael Chiklis and Jamie Chung are all worthy of specific mention. Each one delivers a strong performance. There’s a lot of emotion in this film, and those three characters carry a lot of that weight. Chiklis gives the best performance of his career, and the scenes between Smith and Chung are some of the film’s strongest.

I did feel that the film’s writing had moments where it was a little wooden. I appreciated the blank slate with which the film begins, but a lot of the dialogue didn’t feel particularly “lived in.” However, the film really hits its powerful moments home, and the overall experience is a quality one. It shows that, even more than the inability to communicate, it is the communication that occurs without us even knowing that is sometimes the most painful. The way a comment from a family member unveils deeper feelings of resentment or the way prolonged periods of disconnection communicate a deep feeling withheld.

The film reaches another level after Adrian’s personal secret is revealed a little over half-way through the film. There is a powerful scene where Adrian is finally able to communicate his inner turmoil on his own terms. He and Carly are seated in discussion and behind them we see large concrete supports like you might see beneath an interstate. It reminded me of a tweet from one of my personal favorite critics, Matthew Zoller Seitz, on how many movies today refrain from having depth to their shots. This scene uses depth in the frame so beautifully to underscore the depth of the moment. It is an impeccable visual cue, and indicative of the skill with which Tan weaves his artistic vision into the film’s story.

This film picked up a few critics nominations and even won the Grand Jury Prize at the Dallas International Film Festival in 2018. However, I was unaware of it until very recently. It’s a strong reminder that every year in film offers diamonds in the rough and there are many artists creating powerful films. Tan has certainly created a powerful film here, one that is sure to spark discussion and thought.

As the film ends, we watch as Adrian completes the journey from passive to active. We don’t know what will happen and there are surely more difficult moments ahead, but Adrian has found peace within the turmoil. And it came on his own terms. He has communicated himself in the best way that he can.

That may be the best any of us can do, but I think that’s okay.