The first glimpse of Evangeline Lilly in the sequel to the upcoming sequel to The Hobbit looks pretty cool.

Today Entertainment Weekly released the first photo of Lilly (below), who will be playing a brand-new character to the world in The Hobbit: The Desolation of Smaug.

Lilly, best known for her role as Kate on Lost, will be playing Tauriel, who is an Elven warrior and head of the Elven Guard. She was created by director Peter Jackson and Co. just for the story.

While Lilly’s character looks really cool (a female Legolas), it’s not enough to get me excited for a sequel to a film I really disliked. And the fact that she’s a new character doesn’t help as well and just proves that Jackson and Co. needed to add certain things just to make this into three films. 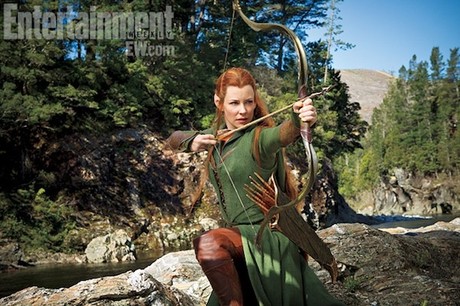 The Hobbit: The Desolation of Smaug will hit theaters on December 13.