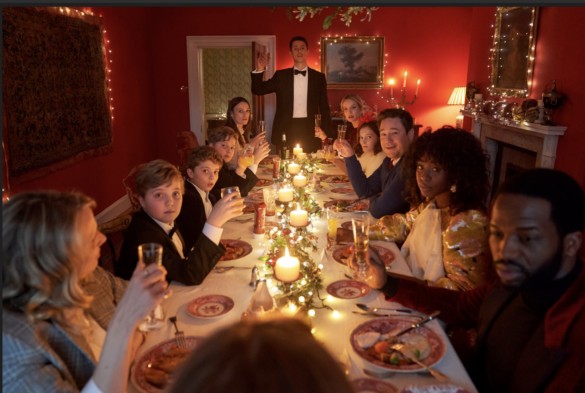 Synopsis:  Family and friends gather at Christmas for the end of the world.

Silent Night, the debut film from writer-director Camille Griffin, either has the world’s worst timing or the best. Written before the pandemic, it tells the story of a group of family and friends who get together for Christmas in the English countryside, as they always have, but the one difference this year is that they all know they are going to die before the night is out. An apocalyptic cloud of poison gas is moving across Britain, which kills every living thing that breathes it in a gruesome and painful way. Because of this, the government has provided a pill to every citizen to take that will allow them to die without pain, so everyone can take it when they are ready, to avoid a much more torturous end. So, no matter if it’s via the gas cloud or the pill, death is imminent and inevitable on this night.

Did I mention Silent Night is a comedy?

An end-of-the-world comedy is not a new concept, but there is something a little different about this one, and a little different about watching it now. While it is a dark comedy, Griffin chooses to stick with an ultra-realistic tone—no alien invasion or giant comet heading towards earth here. No, instead, the poisonous gas cloud is a result of humanity’s willful mishandling of the climate crisis. Secondly, the characters engage in a debate about the veracity of the pill that is provided by the government, and whether the scientists are right, whether they can be believed, etc. This might all be very funny ten years from now, but it just hits a little too close to a nerve right now. Which is probably exactly the point.

That is not to say what Griffin is trying to do is a total failure. She has cast an ensemble of actors, including Keira Knightley, Matthew Goode, and her son, Roman Griffin Davis, who are all capable of handling the various tones and genre that this film navigates. Davis in particular is exceptional as the moral conscience of the group, the world-wise kid who is concerned about all the people whom the government didn’t provide pills to. He is the only one who has not resigned himself to his own fate, and Davis’s acting skills, which we first saw on display in JoJo Rabbit, signal a long career ahead for this fourteen-year-old, who seems to be going on forty.

But the rest of the cast fumbles around a bit, each one falling into a clichéd stereotype, as Griffin’s script is a disappointing case of concept over content. The film is quite effective in its gradual dimming in tone, one that starts quite upbeat and trivial and ends in twisted darkness, but the only character with any texture is Davis’s, so the only emotional connection the audience has is with him. The film spends so much time and effort decoying the audience into believing the film is something else, by the time the audience has finally caught on to what’s happening, the opportunity for emotional investment is gone.

Silent Night would be much more effective if it had found a way to bridge its comedy and horror elements a bit better, but Griffin is unable to commit to either one, so the film flounders, weakly trying to hit a moving target, never able to find its voice.

If Griffin intended to make a film that forces the audience out of their comfort zone, she has succeeded. But Silent Night is a big ask for the casual movie-goer. It confronts head-on the most traumatic elements of current life on Earth with little sentimentality or emotion. It clearly is trying to make some sociopolitical statements, but the harrowing and pessimistic glee it seemingly has for its own fate is slightly off-putting. It is certainly one of the bravest films I’ve seen in a long time, but it also could be one of the most unwelcome, at least right now. During a time when there is so much uncertainty and so much death in the world, it doesn’t feel like an apocalyptic Love, Actually is what people are craving.

Still, like the incredibly annoying Christmas pop songs that are played at the beginning of the film which trick the audience into thinking they will be watching a typical Christmas movie filled with frivolity and family dysfunction, Silent Night just might stick with you, boring itself deeply into your brain, whether you like it or not.