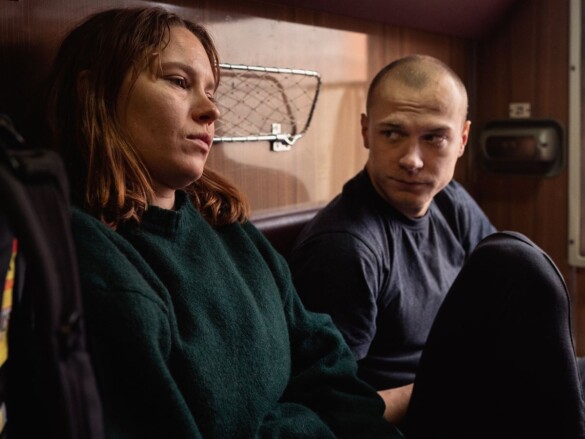 Synopsis: As a train weaves its way up to the Arctic Circle, two strangers share a journey that will change their perspective on life.

In the late 1990s, on her last day in Moscow before she embarks on a journey to the city of Murmansk to see its famous petroglyphs, our protagonist, the Finnish exchange student Laura (Seidi Haarla), is thrown a farewell party by her lover Irina (Dirana Drukarova), who was supposed to accompany Laura but couldn’t due to her work as a Russian professor. At the party, Laura appears confounded and perplexed being around Irina’s friends, and her conflicting emotions about the upcoming trip begin to rise. She is obviously excited to finally go on the trip she’s been waiting for, but her partner dropping out creates an air of mystery around the fate of their relationship.

Laura’s fears aren’t unfounded; her return to Finland is quickly approaching after Murmansk’s visit, and their relationship remains a big question mark that neither she nor Irina wants to figure out the answer to. Laura is anxious, but in the meantime, Murmansk’s petroglyphs are enough to keep her excitement for this trip alive.

Enthusiastic Laura hops on the train to be quickly disappointed when she discovers that she has to share a sleeping compartment with a drunk swearing Russian man called Ljoha (Yuriy Borisov), who works as a miner and is traveling to the city for work. With his vulgar nature and overwhelming personality, Ljoha represents the polar opposite of everything that Laura is. And even though the passengers of this small compartment couldn’t be physically any closer, realistically they’re so far apart. Trapped in with Ljoha for what appears to be days of misery, Laura’s journey to her destination didn’t start on the right foot.

As time goes by, detached from the world on a long train ride with nothing but a camera recorder which has some footage of Irina that she plays over and over, it takes Laura some time to realize how lonely she actually is. She has been living in a country where she doesn’t speak its language very well, in a void relationship that may be coming to an end, and is stuck sharing a ride with the last person she’d like to be with.

Beginning with the second act, the screenplay finds its footing and begins to explore the emotions and motivations of its characters in a much more interesting way. The wheels start turning on Laura’s relationship with Ljoha after she hesitantly accepts his invite to spend the train lay-over period at his foster mom’s house. At the house, Laura’s perspective of Ljoha starts to become less one-sided. She begins to shed her first impressions, and that picture of him in her mind becomes less clear. She realizes that underneath this gigantic front, there is a person who is as lonely and lost as she is.

Kuosmanen’s navigation of the next chapter of the story is excellent; it saves the film from going down the rabbit hole of familiar tropes and known clichés. Even though the film can’t quite tell its tale without relying on one or two of said clichés, they acknowledge them and move on quickly to focus on the two leads’ relationship as they get closer to each other.

What Juho Kuosmanen’s Compartment No. 6 brilliantly captures isn’t a simple love story between two strangers who meet on a train; it’s a state of human nature. Laura and Ljoha’s relationship encapsulates the human need to be together, to connect, to be understood, and be seen. The lack of that connection is what Laura realizes was missing from her relationship with Irina. As she says, “I just miss the way she used to look at me.”

The harsh miner world of 1990s Russia made Ljoha seem like a much more straightforward person than he is, but the truth is that Ljoha knows that something is missing here; life can’t be just this. Both are looking for that spark of magic that comes when you truly connect with someone. In the end, on that Compartment train, what made these polar opposites attract towards each other is being human.