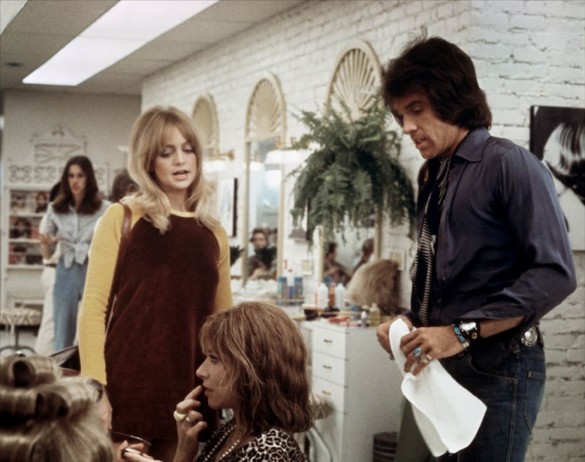 Welcome back to another month of Criterion Crunch Time, where we highlight movies that are leaving the Criterion Channel at month’s end. The first movie I chose to highlight is Hal Ashby’s Shampoo. Now, I would love to tell you that this was picked because of the election occurring right now, but frankly, that would be giving me way too much credit. Sometimes, things just work out that way. For many of you, the election will still be happening in the background, much like the events of this movie.

Perhaps counterintuitive (at first) to that election subplot, Shampoo follows the exploits of George Roundy (Warren Beatty) as he attempts to start his own hairdressing salon, and also have sex with every beautiful woman that crosses his path. And in his case, this is absolutely every woman he comes in contact with. For the purposes of brevity, these women include his girlfriend Jill (Goldie Hawn), his married lover, Felicia (Lee Grant), and Jackie (Julie Christie), who is George’s pseudo-ex-girlfriend and the mistress of Lester (Jack Warden), who happens to be Felicia’s husband.  You got all that? Good, now we can really dive in.

Director Hal Ashby sets the scene for this movie perfectly. In the very first scene, two things are occurring simultaneously. First, we are informed that it is the eve of the presidential election that will end with Richard Nixon winning the office. And secondly, George is entangled in a sex scene with Felicia. This strange juxtaposition absolutely sets the perfect tone. Shampoo is, shockingly, a movie about many things. It features a promiscuous man who is clearly covering insecurity and sadness with his daily bacchanal of women. It details a split world, in which one can attend a swanky elite party where they swig champagne and then move on down the road to experience a counterculture filled with illicit drugs, all the while not indicting either group.

More directly, Shampoo does something that is almost impossible. It makes you feel pity for Warren Beatty (and his horrible Wolfman hair), after he has had sex with Lee Grant, Goldie Hawn, and Julie Christie. There are two specific moments that manage this, in the midst of a purported sex comedy. The scene in which he tells Jackie that he is truly afraid that his girlfriend will eventually leave him is oddly heartwarming and intimate. He knows his faults, and knows that she needs a man that is both successful and, more importantly, stable. It shows a side of the stereotypical cad that we almost never see. That insecurity, that reality endears him to us. And obviously to Jackie, as they end up having sex, all the way up until her husband arrives and they need to cover up. Hey, he may be insecure, but this is still a sex comedy, and that is still Julie Christie.

But the success or failure of Shampoo does hinge on that long night of parties mentioned earlier. Fueled by champagne and jealousy, all of George’s plans and romantic interests all meet and smash into each other in the most awkward of way. And honestly, it clears the way for the best moments of the greatest performance in the movie. Julie Christie could easily get by in this film by being gorgeous, and she is that. But she is so much more. Clearly game for just about anything, Christie goes all-in on this scene, ranging from death glares and mouthing her jealousy across the table, all the way to literally climbing under the table and, at the very least, insinuating fellato. And yet, it is never a ridiculous performance. She truly has mastered the ability to be a part of the upper class and be able to focus her desire into a singular performance.

As the film moves to the counterculture party, director Hal Ashby never takes the easy way out. It would have been simple to only focus on how out of place the rich folks are among the crazy hippies. There are small moments of that, highlighted by Lester struggling with the choice to get into the hot tub with a few strangers. It also makes the interesting choice of showing that, if anything, the young, sexually free people at the party are doing much the same thing as the elite, just a bit more honestly. No cheating, no lying, just being clear about what they want. This all culminates, of course, into our protagonist George having sex with Jackie on the floor. But no happy endings here, as Jill sees this and promptly throws a chair at the window.

Speaking of a lack of happy endings, that is what pushes Shampoo from good to very good. If our man, George, ended up with any of these women, the film falters. Jill clearly needs someone stable, a version of George that he is not ready to be. Felicia is married and relatively settled, despite her dalliances with George. And Jackie? Well, he tried. George does give the grand gesture and state that he wants to be with her. But does he truly? Or is he just afraid of being alone? I side with the latter. Jackie, probably his most serious relationship, is also safe as she knows and accepts who he is and likely always will. But she is also enmeshed with married Lester and believes that he will divorce his wife to be with her in the end. So, sad, unfocused, confused George is left alone, hammering home the point that he needs to make real changes. Yes, his life is filled with affairs with beautiful women, but that clearly is not enough. If those changes are not made, George will drift through his charmed life, terribly unhappy.

Shampoo is the exact kind of film I look for from Criterion. A mix of genres and tones, a lauded director that many have forgotten about, and starring some of the best actors of a generation. Although that mashup of tones can be difficult for some and the film takes a few minutes to really dive into the plot, it all coalesces together in a rewarding way. If you ever wondered why actors like Warren Beatty and Julie Christie were lauded for their appeal, and not purely closeups of their beautiful faces, Shampoo is one to put on your list. Beatty cruising down the road on his motorcycle and Christie celebrating her newest hairstyle absolutely still have an impact even today. I highly recommend watching this one before it leaves the Criterion Channel in just a few weeks!

Up next week, Red Road from director Andrea Arnold!