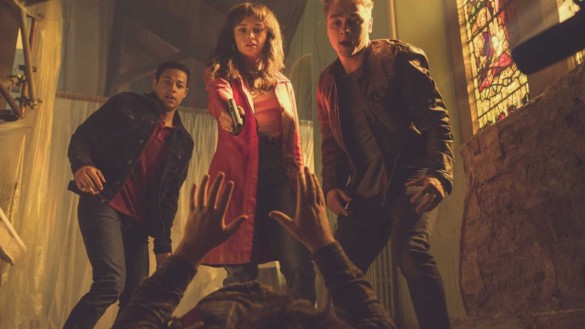 Synopsis: To avenge her mother’s death, Pixie masterminds a heist but must flee across Ireland from gangsters, take on the patriarchy, and choose her own destiny.

If Guy Ritchie were to direct a movie written by Martin McDonagh, based on Pedro Almodóvar’s Y Tu Mamá También, it might look something like Pixie. Featuring a spirited performance by Olivia Cooke and boasting a colorful cast of characters (including Alec Baldwin as a gun-toting Irish priest) Pixie feels more like a late nineties/early noughties heist caper than anything else. There’s typical elements of Irish humor here (including a blink-and-you’ll-miss-it appearance by Father Ted’s Pauline McLynn) and a typical McGuffin in the form of a bag of drugs which everyone wants to get their hands on, so you feel you’re very much on familiar ground as far as British comedies go. However, although it doesn’t do anything new and instead follows some clichéd (and convoluted) plotting, Pixie is still a fun endeavor and worth the watch.

Olivia Cooke plays the terminally charismatic Pixie, daughter of a local crime boss. She’s looking to run away to San Francisco and enlists the help of friends Frank and Harland to sell a bag of drugs she stole from a cabal of priests in order to fund her escape. Along the way, she must contend with her homicidal brother (Turlough Convery), a drug dealer with a factory front (played by Dylan Moran, giving the effect of Bernard Black having gone into the drug business), and a vicious hitman (Ned Dennehy) who will stop at nothing to kill his target. As the trio make their way across the Irish coastline, looking for solutions, they develop a bond and friendship that might just get them out of this mess.

It all makes for some raucous moments and is carried almost entirely by Cooke, who’s effortless, megawatt charisma lights up every scene. The dialogue – especially hers – is snappy and desert-dry, emphasizing the Irish roots which it champions. Unfortunately, the plot itself isn’t as snappy. Instead, it is often convoluted and tangential, feeling like it doesn’t really know where it wants to go. A third-act denouement tests the limits of suspension of disbelief, feeling wasteful (especially of Baldwin, who gets very little to do), and wraps everything up in a way that’s a little too trite.

You feel the ostensible heart of Pixie isn’t actually Pixie herself, but Frank and Harland. The hapless duo stumbles unwittingly across the drugs, bringing them into Pixie’s orbit. They both vie for her affections, in one way or another, and have a clear bond which comes out through their dialogue. It’s a shame, then, that so much of their dialogue feels stilted and childish. There is very little in the way of emotional growth or character growth; perhaps only Colm Meaney as Pixie’s father manages to wring pathos from the script.

As mentioned, fans of Guy Ritchie will find much to enjoy here; Pixie’s sparky dialogue, a hyper-stylish shootout near the end, and fast, quirky edits all call to mind Ritchie’s best oeuvre.  There’s lots of fun here, but there’s a sense director Barnaby Thompson wasn’t interested in pushing the boundaries of the genre. Rather, he sticks with tried and tested methods and, while you may have seen them all before, if you’re a fan of the genre you won’t leave Pixie feeling shortchanged.