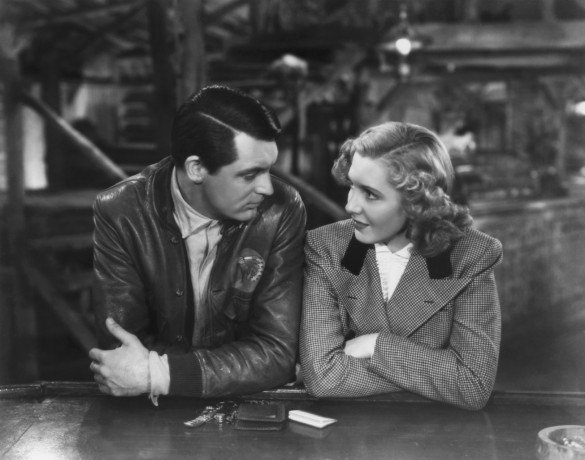 Welcome to a new month of Criterion Crunch Time. It’s time to find four more movies leaving the Criterion Channel. One of the great things about this service is finally checking out those movies on your List of Shame. We’ve all got them, and many times they are much older films. This is not the place to get into the battle of streaming services, but let’s just say that Criterion Channel is one of the very few places you can stream movies made before 1980. And we are certainly starting this month well before the ’80s! Now on to one of the films on my personal list of shame, Only Angels Have Wings from way back in 1939.

Only Angels Have Wings, from widely acclaimed director Howard Hawks (Bringing Up Baby, Rio Bravo, and many others) focuses on the adventures of a mail freight company in a remote South American location. We are ushered here by the introduction of Bonnie Lee (Jean Arthur) being followed for her beauty off of a literal banana boat by pilots Joe (Noah Beery, Jr.) and Les (Allyn Joslyn). After some unfortunate mild racism (“I’m so grateful to hear something that doesn’t sound like pig Latin.”), we are treated to wonderfully balanced flirtation between the three and good-natured competition for her attention between Joe and Les. This is no easy task and shows the masterful direction from Hawks, as well as some underrated acting, particularly from Arthur. The character of Bonnie is actually a quite difficult one to play. She has to be bubbly and charming, open to flirtation without seeming like a sexpot, and moving forward in the film; be able to show true emotional range due to sudden loss. Arthur manages to cover all of this in the first half-hour, and even improves from there.

Only Angels Have Wings also expertly sets up high stakes, all while surrounded by the fun flirtation of the introduction. We quickly learn that these men often fly in conditions no sane pilot would because they would lose their contract if they did not. This directly leads to the death of Joe, who desperately wants to land, in order to take Bonnie Lee out for a nice steak dinner. It is heart-wrenching to hear the hope in his voice over the radio over finally making that landing, only to see him crash through trees next to the fogged over runway. Seeing the terror on Bonnie’s face as a counterpoint to the stone faces of the men on the ground is particularly affecting, and a shocking change in tone from everything leading up to that moment

Many older films fail for modern viewers because we may be spoiled when it comes to action and cinematography. But Only Angels Have Wings is a true exception here. The work of cinematographer Joseph Walker was honored with an Academy Award nomination and it is clear why even now. The numerous crash sequences are incredibly harrowing, regardless of when it was filmed. Although experienced viewers may be able to see exactly how he is pulling these tricks, the combination of his work and the tremendous performances absolutely are impactful and meaningful. Plus, the death of Joe in the first act sets up the idea that we have no idea who will survive as the runtime pushes on. 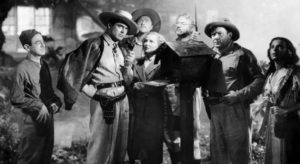 But we have gone far enough here without mentioning two of the more important actors in this film. Just before Joe’s death, we are introduced to Geoff (Cary Grant). Grant feels like a bit of a precursor to Bogart in Casablanca in this role, but with that quintessential Grant flair. Geoff runs the outpost and is gruff, to the point, and seemingly damaged beyond repair by the love of his life leaving him. As his relationship with Bonnie Lee changes from contentious (he refuses to mourn for Joe) to friendly and finally to out and out romantic, there is an utterly fantastic scene between the two wherein she digs for information about the infamous Judy. Although Geoff tries to avoid her questions by continuing to ask “who” whenever she gets a bit too close to the truth, Bonnie and the audience find out that she left him because his job is just too dangerous. This, of course, leads him to take on more and more dangerous jobs. This, other than Cary Grant being Cary Grant, is what ultimately makes him a likable character. Yes, he willingly sends young men to their possible deaths in the fog. But when things get too dangerous, he is the one that goes up himself.  But this began with talking about Judy, a character who I never thought would make an appearance. She is a powerful character even with her just being spoken about in hushed tones. But when she does finally appear, things certainly pick up emotionally.

Now, sometimes it feels as if we don’t have this much anymore (probably because the studio system is gone, for now), but old Hollywood was fantastic at making honest to god movie stars. When Rita Hayworth (in her first meaningful role, no less) steps onto the screen, that my friends is a movie star. It is not just her looks, and she is absolutely stunning. It is her presence, and also her willingness to play a surprising range in a limited amount of time on screen. A scene with an inebriated Judy slowly dealing with her relationship with Geoff immediately makes her a real person, and not just the woman who hurt one of the protagonists. Judy returns at just about the worst time for our lead romance, not only complicating things between them, but also bringing along her new flyboy husband, Bat MacPherson, who just happens to have done something terrible that makes him hated in the entire industry. If there is a weakness in the film, it is trying to imagine Bat and Judy together, especially in comparison to Cary Grant.

It should also be mentioned that Bat, hated for bailing out to save his own life while his mechanic died, has his own journey that is surprisingly effective. Having this arc also enables Geoff to move on from Judy and to focus on Bonnie. It is also admirable that Geoff never becomes a matinee idol type. Even when he is admitting his feelings for Bonnie, he uses a gambit that she only sees after he is out the door on another dangerous mission. The script, penned by Jules Furthman, allows him to both be in love and stay true to his independence and his own personal image of himself as a bit of a scoundrel. That moment when Bonnie realizes what he has done just endears her (and us!) to him even more.

As I look back on why I love Only Angels Have Wings, the word that keeps popping up is balance. Bonnie Lee’s romance and grief, Geoff’s gruff nature and charm, Bat MacPherson’s amazingly complete character arc, and even Judy’s attraction for flyboys and desperation to be safe. All of these precarious balancing acts work just about perfectly, and so does the movie. Only Angels Have Wings is also precarious, an action film, filled with romance. This split genre has been attempted numerous times and usually fails. Even the best seem, well, out of balance. In this film, the action is high wire and keeps you on the edge of your seat, but the romance keeps you wanting all of these men to arrive home safe, even when they can’t admit to themselves that they want it too.

Join us next week as we watch Albert Brooks’s Mother, one of his many movies leaving Criterion Channel at the end of this month.