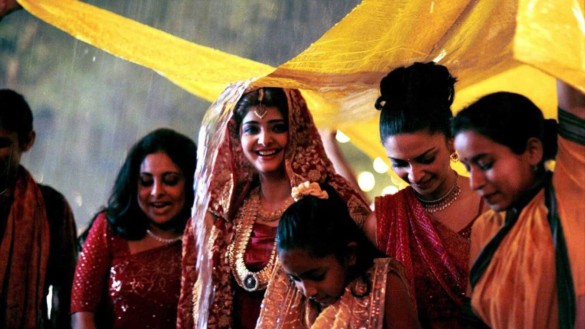 The great thing about film in general, and especially movies on the Criterion Channel in specific, is the element of surprise. It is quite easy, after watching literally hundreds of movies, to think that you have seen all there is to see. And, to be fair, it takes a lot to fully surprise me as a viewer. But because there is such a variety of film on the channel, every once in a while, you will run into a movie that will surprise you. This is even true when it is surrounding subject matter that seems relatively familiar. And that brings us to Monsoon Wedding, from director Mira Nair.

Yes, in many ways, it does feel familiar. We have all seen movies in which a giant, extended family, gathers for a wedding, and we learn something about family and a lot about the nature of love. Rachel Getting Married, My Big Fat Greek Wedding and Crazy Rich Asians immediately spring to mind. And I’m sure you have three or four other movies at the ready. Point is, this is well trodden ground. But Monsoon Wedding takes this path to new heights.

Monsoon Wedding is the story of Aditi (Vasundhara Das), who is being wed to Hemant Rai (Pravin Dabas) in an arranged marriage, set up by her parents Lalit Verma (Naseeruddin Shah) and Pimmi (Lilete Dubey). As is common in films of this type, there are many overlapping storylines, all of which provide some level of drama. The most obvious source is that Aditi is still hung up on her ex, who is also her boss, and married. This fact hangs over the film like an ominous rain cloud, just waiting to explode. And yet, it doesn’t. Yes, the truth comes out. Aditi chooses to tell Hemant, to which he initially explodes, but quickly forgives her. It is a moment of sublime misdirection, both from Nair and screenwriter Sabrina Dhawan.

Instead, the true drama arises from the storyline following Aditi’s cousin, Ria (Shefali Shah). The way in which her story unfolds is truly masterful. When interacting with Tej Puri (Rajat Kapoor), another family member who, through his wealth, has ingratiated himself with the family as a whole, makes us feel immediately ill at ease. At the outset, this makes little sense, as he seems charming, and has even offered to pay for Ria’s education in the United States, something she clearly desires.

Nair, in particular, shows tremendous patience before revealing the disgusting past of Tej. And she does this by focusing on the process and experience of Ria. It feels almost revolutionary to center the person impacted by sexual violence, as opposed to trafficking in pain by showing, or even alluding to the horrific acts themselves. Instead, we see through Ria’s eyes as he appears to groom a young family member to go through the same horror as she did as a child. In a film full of near perfect performances, it is Shefali Shah who will stick with me. This would be an easy role to over or underplay, but she is just right in each moment. From her tight-lipped acceptance of his presence at his introduction to her growing rage as he gets closer to the young girl, and finally to her explosion, simultaneously ending her chances at a free education and finally letting the truth be known; each of these moments is timed and revealed in such a way as to let us see that pain without reveling in it.

Like any great movie about love, Monsoon Wedding offers a look at all kinds of love; romantic, parental, sibling, friendship, and even supposed acts of love gone horribly disgusting and wrong. I also admired Nair’s willingness to take at least a sidelong look at class and how it interacts in these worlds. The storyline of the, let’s say, quirky wedding planner, P.K. Dubey (Vijay Raaz) who shockingly shows a human side and falls in love with Alice (Tillotama Shome), the maid of the family he has been hired by for the wedding. His use of the flowers, which were previously only a source of business and money, to woo Alice is genuinely heartwarming, and an unexpected turn for a character who, at first, is easy to hate or simply laugh at his misfortunes.

It is not surprising that, despite her numerous successes in films like Queen of Katwe and The Namesake, many know Mira Nair for Monsoon Wedding. There is a deep abiding passion, a willingness to delve into human darkness, all while exploring the gentleness of human love, that endears itself to the viewer in an unforgettable fashion. And frankly, given Nair’s flair for visuals in general, and sumptuous colors in particular, she should have massive budgets thrown at her as a matter of course.

So, as we close another chapter on Crunch Time, I am grateful for surprises and for the ability to watch films that stretch us. It is not accident that many of these surprising films are from female directors. We owe to it to ourselves as film fans to search out new perspectives. And this is one absolutely easy way to branch out and find new stories. Thankfully, with a little research and access to streaming services, old stories told in new ways are easily available to us.

Next up, we watch Bluebeard from director Catherine Breillat