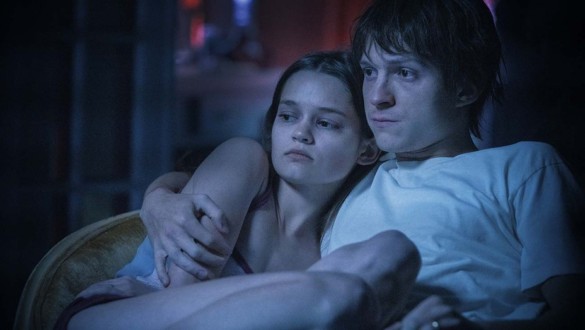 Synopsis: The wild journey of a disenfranchised young man from Ohio who meets the love of his life, only to risk losing her through a series of bad decisions and challenging life circumstances.

After riding high on the unexpected success of two little-known movies called Avengers: Infinity War and its sequel Avengers: Endgame, you might have expected the Russo Brothers to follow up with a similarly high budget theme park ride of a movie. After all, they’ve surely been given the keys to the mouse kingdom after shepherding Endgame to its position as the highest-grossing movie of all time.

And yet, having written an underwhelming movie starring one Avenger (2020s Extraction starring Chris Hemsworth) they return to the director’s chair with another Avenger in this slightly tepid, occasionally muddled semi-biopic about a man caught in the opioid epidemic which has ravaged America. Although not without its charm (certainly it is incredibly stylish and rarely flags during its two hour run time), Cherry feels more style than substance, which is a shame given the ripe subject matter as well as the acting chops Tom Holland brings.

Based on Nico Walker’s autobiography of his own descent into drug addiction and crime, Cherry finds the eponymous protagonist (played by Tom Holland) recounting his life story in a series of chapters. The first chapter sees him as a directionless layabout, smoking dope and dropping ecstasy with his friends while working a string of dead-end jobs and dating a girl who seems to have zero interest in him. He meets Emily (Ciara Bravo) at community college and falls deeply in love. Emily is afraid of her own feelings for him though, and so she begins to spurn him, at one point threatening to move state just to be away from him. Desperate and desolate, Cherry joins the army, where he has a near death experience which leads to PTSD and eventually returns home.

From there it’s the typical story told by many American vets: unable to get work and virtually abandoned by the country he put his life on the line for, Cherry seeks help from a doctor for his PTSD. Without batting an eyelid the doctor puts him on a course of Oxycontin, which leads Cherry into a hellish nightmare of heroin addiction – into which he drags Emily – and eventually onto a life of crime as he begins a series of bank robberies to fund his habit. It is a bleak, dark journey into a tortured psyche and at times can be a very difficult watch. The knowledge that this is based on real-life events makes it all the more harrowing: we aren’t watching superheroes swing magical hammers or spin webs and fly through the air now, we’re watching a man struggle with his demons and the Russos never flinch from this. Many scenes feature Cherry and Emily half-naked on the kitchen floor, a needle sticking out of one of their arms, drifting away in an opiate daze. It is heart-wrenching to see.

Holland seems to be spreading his wings a little more these days; last year’s The Devil All the Time was a departure from the pop culture trajectory he was on and featured another anti-hero caught in a difficult situation. Cherry could easily play as a double header with that movie – though few might have the stomach for that. Holland is always totally compelling here: in early scenes he plays Cherry as a somewhat stoic and disaffected youth, trying to figure out his path in life. In the later scenes, he has completely transformed, displaying the kind of jerky, kinetic energy usually reserved for those deep in addiction. Cherry comes across as something like an American version of Renton from Trainspotting, all nerves, and jumpiness, and constantly dripping with sweat, but underneath that a boiling, seething anger waiting to be unleashed. He apologizes to one bank teller during a robbery, assuring her he’ll wave his gun on the way out so that her superiors know she was compelled to hand over the cash. “Is that supposed to make you a good guy now?” she responds to him archly. He stares at her for a moment with a white hot intensity bordering on disbelief before stepping forward. “Did you fight for this fucking country?” he snarls.

Cherry’s relationship with Emily plays out like a modern-day Bonnie & Clyde without the bloodlust. They are two co-dependent people who have trapped each other in this chaotic situation. For all their obvious love, they are clearly destructive and bad news for one another. After Emily ODs and lands in the hospital her devastated and furious mom warns Cherry: “if you love her then you’ll be a man and walk away. You get up and walk away or I’ll fuck you up”. Naturally, neither Cherry nor Emily listen to this advice and find themselves completely unchanged by the experience. Bravo is great as Emily, especially in the later scenes where she is clearly haunted by the state of her life, simultaneously loving and hating Cherry for the part he played in her downfall. She’s often relegated to a bit part here, and you find yourself wishing she had more agency in the story.

The story is stuffed, which is part of the problem. In trying to adapt the many facets of Walker’s autobiography, the Russos feel like they have bitten off a little more than they can chew. Cherry comes at you fast, and subsequently, you’re left with little time to really absorb the moments that should mean something. As well as this, any kind of subtlety and nuance is ultimately sacrificed for the sake of the narrative pacing, meaning what we’re left with is something akin to a slideshow of Cherry’s lowlights without a wider context or deeper examination of what’s going on.

Although they bring a wonderful stylishness to Cherry, the Russos can’t quite bring it home. There is too much story and not enough substance here. Holland is excellent and shows he can handle prestige drama just as well as he can handle a Spiderman costume, but even his eminently watchable performance can’t lift Cherry above the ranks of a fairly average drama, which is a shame considering the opportunity the Russos had here. Cherry is by no means a bad movie, it’s just not something that will leave much of a mark once the curtain comes down.