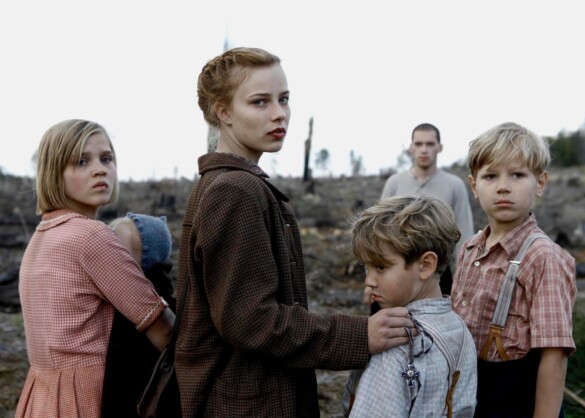 Of the many glories of watching movies on The Criterion Channel, one of the most satisfying is finding filmmakers’ early works. The landscape of film being what it is, most promising artists are being or have been scooped up by the monstrous conglomerates in an odd desire to be taken seriously by cinephile circles. And yet, most of these directors’ big studio films are nearly unrecognizable from their introductory works. To really tease that apart would take a much longer article and likely a whole separate series. But nonetheless, this was a thought that was hard to shake as I watched Lore, directed by Cate Shortland, more recently the helmer of Black Widow.

Lore is the story of a family of German children making their way across the country to the safety of their grandmother in Hamburg at the tail end of World War II. As with much of Shortland’s work, she takes a different angle than most filmmakers would. It is quite easy to vilify German people at this time, but she analyzes where that line might be. The parents who leave at the outset of the film are an obvious target. They are adults who made specific choices. But what about the children? Not so easy, especially given their disparate ages and levels of maturity. The protagonist of Lore, the oldest child, and titular character Hannelore (Saskia Rosendahl) challenges us at every turn. That challenge is not only due to Shortland’s work, but the impeccable performance from Rosendahl.

On the one hand, she remains strong for her siblings, she has very little, yet finds a way to make it last and provide, including everything from shelter to purchasing breastfeeding for her infant sibling. And yet, the script, penned by Shortland and Robin Muhkerjee, never allows us to forget that she has been raised in Nazi Germany and all of the attitudes that imply. When the film introduces Thomas (Kai Malina), a purported refugee from the concentration camps, Lore’s beliefs come to the forefront. She eventually uses him for safety, partially for romantic attention, but the power she wields over him is rooted in racial pride and prejudice.

But despite Lore being a personal story about a family, it also focuses on atrocity, but not an expected atrocity when discussing Nazi Germany. Yes, there are mentions of concentration camps and scattered photos of this experience, but it is more focused on self-inflicted atrocities on the German people in reaction to outside intervention. As the family journeys across Germany, they witness a cultural shame, ending in fear and violence. Besides their own parental figures disappearing, the children see the abandoned body of an unnamed woman, the remnants of a man who committed suicide via gunshot, and other Germans who either refuse to help them or nearly demand sexual satisfaction for a simple river crossing.

Despite these horrific sights, Shortland never allows Lore to be an ugly movie. Abandoned cities, American military intervention, and implied violence allows Hannelore and her siblings to travel across nature and vistas rarely seen in a film that focuses on this time period and place. Additionally, Shortland and cinematographer Adam Arkapaw, by choosing odd angles and stillness, show the terrifying feeling of being trapped in your country, which has been carved up by warring factions of the world. Despite that emotion, there is still beauty in these shots that inspires memory of the best work of Terrence Malick.

Lore is also a movie that rewards patience. Despite the abject internal terror, it can be argued that, for the first hour, little actually occurs plotwise. But once Thomas is introduced, the film is propelled forward. His presence forces Lore to question everything. Despite her words, her actions show her curiosity and attraction towards this young Jewish man, who should represent everything she hates. In a truly disturbing sequence, she even distracts a German man while he bludgeons him with a rock in order to steal his boat and cross the river. Yes, this man is hideous in his own right, but for Lore to go against everything she has been taught by Nazi parents represents an ability to change, even with disastrous results. It is no accident that this moment occurs immediately after she buries two pictures; one of her father and one of her father at a concentration camp. Both her cultural and personal shame are on display with this action, but as the film reveals, these acts and memories are not to be buried. The world is complex and people may not be what they seem.

In viewing Cate Shortland’s films (even Black Widow), she is clearly interested in difficult topics, viewed from a new perspective. Lore offers a difficult look at an era of history we all feel like we have a handle on for obvious reasons. Yet, film can offer us a look, uncomfortable as it may be, at a journey into shame and despair. There are no easy answers and Lore leaves you unsure who to root for, or even if there is anyone to support in a complicated and changing world.